During the lead-up to the release of Gaspar Noé’s newest provocation, Climax, he released a one-sheet that’s perhaps the most honest bit of film advertising ever created: “You despised I Stand Alone, you hated Irreversible, you loathed Enter the Void, you cursed Love, now try Climax.” Noé’s glib poster featured his grinning visage toasting future viewers. Nothing it says is wrong — each film has its defenders and detractors, but few filmmakers can turn off viewers like Noé. What’s most amazing about his latest is how completely enjoyable it is for the first 45 minutes or so. What follows is peppered with his standard touchstones: sex, sexual violence, regular ol’ violence, and hallucinogenic drug trips. Noé fans will find everything they like about his films here in Climax, but even his usual critics may be seduced by his style — at least until the drugs take hold.

Climax telegraphs exactly where it will go in its opening minutes. After a quick flashforward to future violence, we settle in to a series of interviews with dancers played on an old TV circa 1996. The screen is surrounded by highbrow texts on the left (philosophy and a treatise on Fritz Lang) and VHS tapes on the right of the most absurd kinds of horror, going all the way back to Buñuel’s Un Chien Andalou through more recent nightmares like Salò, Dawn of the Dead, Suspiria, and Possession. The on-screen text suggests the film is based on real events from 1996, but it’s all a fabrication on Noé’s part.

Noé fans will find everything they like in his films, but even his usual critics may be seduced by his style — at least until the drugs take hold. 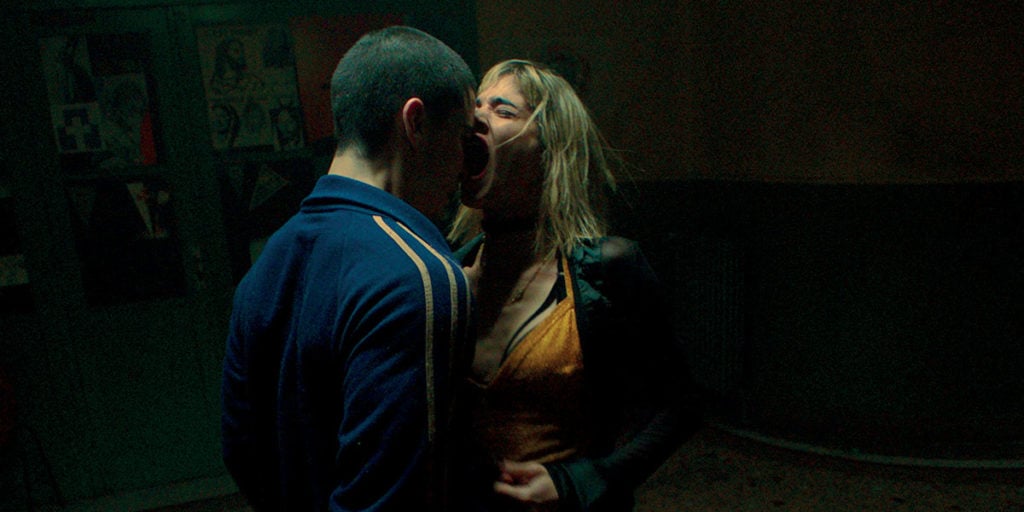 The performers are congregated in a dance hall with their choreographer (Sofia Boutella, the only professional actor in the ensemble) who plans to take the troupe on a tour of the US. In Climax’s first section, they perform a choreographed dance soundtracked with pulsing, incessant dance music from ‘90s agitators like Daft Punk and Aphex Twin. Even the staunchest Noé critics will have trouble finding fault with the voguing (the actors are all professional dancers and YouTubers), but someone has spiked the bowl of sangria with LSD, and the stylish music video soon turns into an even more stylish nightmare.

Noé’s camera (which he operated) is as fleeting and energized as the dancers in front of it. His regular cinematographer, Benoît Debie (who also shot TIFF success The Sisters Brothers), plays up the garish club lighting, a candy-colored rave nightmare. There’s a virtuoso sequence toward the end where the camera flips upside down (mirroring its acrobatics in Irreversible), which cleverly dehumanizes the dancers. When looking at faces upside down, our brains struggle to reorient them; we can figure out who the character is through isolated features, but they look foreign, alien. The LSD has warped them into panicky monsters, and the camera allows us to see them in this new light by actually transforming them.

There’s plenty that’s sickening and offensive, including the fate of a child unfortunate enough to be roped into the debauchery, but few Noé films allow the audience to sit back and revel in the music and images quite like Climax. Chances are you’ll have a much better trip than the unfortunate souls on screen — that is, if you don’t vomit first.

Notes on TIFF 2018: Flying to Toronto With Robert Bresson

‘Roma’ is a Staggering Achievement