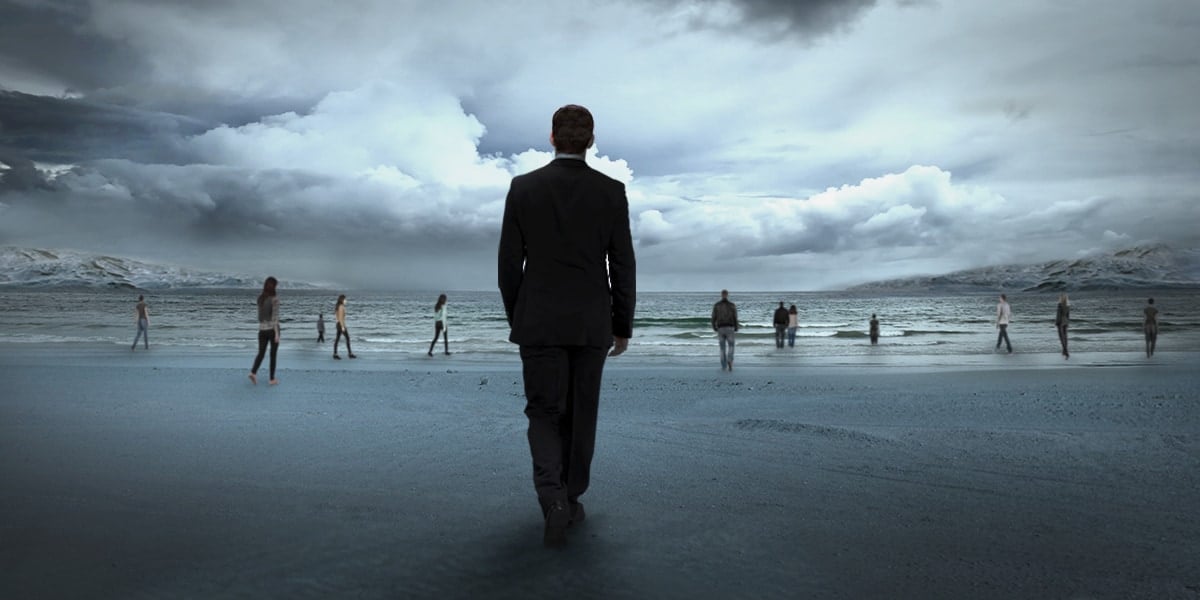 “There are two ways through life,” intones the Mother, “the way of nature, and the way of grace.  You must choose which one you’ll follow.”  Mother is married to Father, and together they have three sons. They live in a modest house in central Texas, and the light – directly from the sun, diffused by the clouds, reflected and refracted by the world around – shapes their faces.

Everything bends towards the light.  From a singularity in the void sprung light so intense that it pushed space out to the farthest limits of the universe.  In those first few minutes, photons yielded atomic nuclei, which through electromagnetic forces eventually pulled electrons into their orbits.  Clouds of hydrogen and helium gases were shaped into nebulas, and illuminated with every brilliant color in the visible spectrum.  Gravitational pressures condensed large quantities of gaseous molecules into solid forms, which were drawn to balls of light that burned nearly as hot and as bright as in the beginning.  Radiation from those stars slammed into the rocks, in some instances causing hydrogen and oxygen to combine into water on the surface.  Electricity coursed through the seas, charging bits of matter, until, in at least one instance, cellular division began.  Prokaryotes to eukaryotes.  Single-cell to multi-cell organisms.  Photosynthesis to respiration.  Life moved to the edge of the water, and then on to land, taking ever more diverse shapes.  Trees sprouted from the crust and reptiles stood on hind legs, every living thing reaching back up towards the light.

The Tree of Life battles the medium of film only to strengthen it.

Each of us is born to a mother and father, but our lives are our own.  We are the only fully sentient creatures; with our instincts suppressed, we must learn about the world through our experience of it.  Our first lessons come through touch and sight, which teach us about pleasure and pain. From those basic senses, we develop our consciousness, and we come to understand ourselves as autonomous beings.  We recognize differences in the bodies of others, and we become all too aware that our own bodies are susceptible to deformity.  Through systems of reward and punishment, we internalize concepts of right and wrong.  We comprehend abstract relationships, like property and ownership.  We become aware of inequities, not just in possessions, but in abilities and in the love we receive from those around us.  Those inequities inspire fear and resentment and defiance.  We build structures, physical and metaphysical, to situate ourselves in and shield us from the greater world.  We measure our losses, and we experience grief.  And we create representations – be they a child’s watercolor painting or a Brahms concerto – to try to understand these experiences, and express the meaning that we find in them.

Of course, all representations are necessarily incomplete, and the further an artist reaches towards a comprehensive portrait of the human experience, the more incomplete the project will ultimately be.  But it is only those truly ambitious attempts that can inspire awe.  Terrence Malick’s The Tree of Life is such an attempt, quite literally situating individual characters within cinematic depictions of the creation of the universe and the dawn of life on earth.  Both the culmination of a career and a bold departure, the film aims to give shape to those ideas, feelings, and impulses that escape articulation but lie at the heart of all human motivation.  Sprawling, contradictory, and yet undeniably vibrant, The Tree of Life is an experience not defined by congruence but by resistance, analogous to the feeling of rushing water flowing between your fingertips; sensual, but never entirely graspable.

Largely built on the tension between narrative and abstraction, the film centers on the O’Brien family of Waco, Texas, but positions them within the grand cosmological order. Early on, in the present tense, Mr. O’Brien (Brad Pitt) and Mrs. O’Brien (Jessica Chastain) learn that one of their three sons was killed in combat overseas.  They inform their oldest son Jack (Sean Penn), now an architect working in a major city, of his brother’s death, inspiring in Jack a journey that is as much metaphysical and spiritual meditation as it is remembrance. He takes us back to his 1950s boyhood (where he is played Hunter McCracken), recalling the forces that shaped him – his mother’s kind heart and playful spirit that belies a sheltered passiveness; his father’s sternness, ranging from practical to abusive, and stemming from his frustration and failure; and the conflicting jealousy and protectiveness he felt for his two younger brothers.

Collecting images that are at once archetypal and deeply personal, The Tree of Life evokes those moments in an individual’s life where his actions expose him to the weight of time and space, even if he does not fully understand what drives him to do what he does.  Walking down the street, Mr. O’Brien talks to young Jack about the ways of the world, when suddenly the boy tosses away the stick he was carrying and begins to model his posture and stride after that of his father.  Jack abuses his brother’s trust, first goading him into sticking a coat hanger into an unplugged, harmless lamp socket, and then later inflicting great pain by shooting his finger with an air rifle. At a friend’s urging, Jack steals a negligee from a neighbor’s house, which overwhelms him with shame, and he throws the article in a river.  Young boys play in the streets, running through clouds of pesticide sprayed by the city, and strapping cans to their feet to lumber up and down stretch of asphalt.  Each of these scenes is staged to accentuate the mechanics of movement, and Malick, along with cinematographer Emmanuel Lubezki, moves the camera in time with the physical action on the screen: following the arc of a swing set, the rush of water over the edge of a cliff, or the slow growth of plant life up from the ground.  The camera circles its human subjects, pushing and pulling against them, mimicking the twitching and extending of muscle tissue, while the light draws out the texture of individual skin cells.

Unlike other American filmmakers of his generation – Scorsese, Coppola, and all those directors who professionally came of age in the 1970s, in the shadow of Godard and the revolutions of the French New Wave – Malick has not explored stories and themes in terms of their potential for pure cinema.  Rather, his films have sought to bend the rhythms of cinema back towards the rhythms of life, to create cinema that feels like life, replicating the act of living not through some false stab at realism, but through a heightened type of expressionism.  His films are composed upon deliberately slow, languid tempos, but the beats are propulsive.  Visually they move in concert with the tonal, almost operatic scores that accompany them, building and descending, breaking down and regenerating like muscle tissue, but always moving forward.

Inescapable comparisons only serve to clarify the distinction between Malick and his peers.  Take the kinetic swagger of Arthur Penn’s Bonnie and Clyde (1967) next to the desolate trudge of Badlands (1973), in which robbery, murder, and self-destruction are not an ethos but a process.  Or the classic war movie romanticism of Saving Private Ryan (1998) alongside the despairing humanism of The Thin Red Line (1998), in which violence is not measured by the spilling of an individual’s intestines, but by the injuries inflicted on nature and the collective soul. Days of Heaven (1978) is a sweeping American parable resting on sustained depictions of agrarian labor, binding acts of love and death to the cadence of the seasons, rendering the near-mythic mundane.   And The New World (2005) strips down the legend of Pocahontas and John Smith to a consideration of the most basic modes of communicative interaction between men and women separated by more than oceans – touch, commerce, ritual, battle, etc.  In each of these films, Malick explores the motivations of characters, but not in terms of those characters being cinematic entities, but biological ones.

The Tree of Life is Malick’s most direct exploration of the wells of human motivation, particularly when it comes to our capacity for cruelty and compassion.  Competing scenes of children strapping a toad to a bottle rocket and a boy rising from his chair to defend his brother from his father’s fists flying across the dinner table ask us to ponder if our curiosity, our callousness, our indignation, and our empathy are byproducts of evolutionary adaptations, or whether they are some spark inside of and beyond ourselves that illuminate our consciousness.  In the extended creation sequence, a velociraptor stands over a wounded parasaurolophus, ready for the kill.  But at the last moment, the predatory dinosaur steps back and runs away.  Can this fairly be called an act of mercy?  Is mercy an inherently human trait?  If it is – or is not – is it the result of biochemical randomness, or is it a deliberate act of the soul?  Ultimately, Malick seems to find some sort of peace amid the tempest, recognizing these dualities – nature and grace, mother and father – are names we give to describe the constant wrestling inside of us; that wrestling that compels us to walk through each new door, on the other side of which we see ourselves and others again for the first time.

There is a fight at the heart of all of Malick’s films, a fight against the medium itself.  Cinema, not dissimilar from creation itself, is the act of bending light around the lens of a camera, imprinting it on emulsion or digital pixels, creating images that are objects unto themselves.  Malick creates images but uses them to evoke those physical and emotional experiences that make up the human condition: pushing, pulling, tearing, and regenerating.  It is resistance to cinema, but resistance that only makes cinema stronger.  Breaking down.  Building up.  Bending towards the light.

The Conjuring: The Devil Made Me Do It is too Formulaic and Weighed Down to be Scary