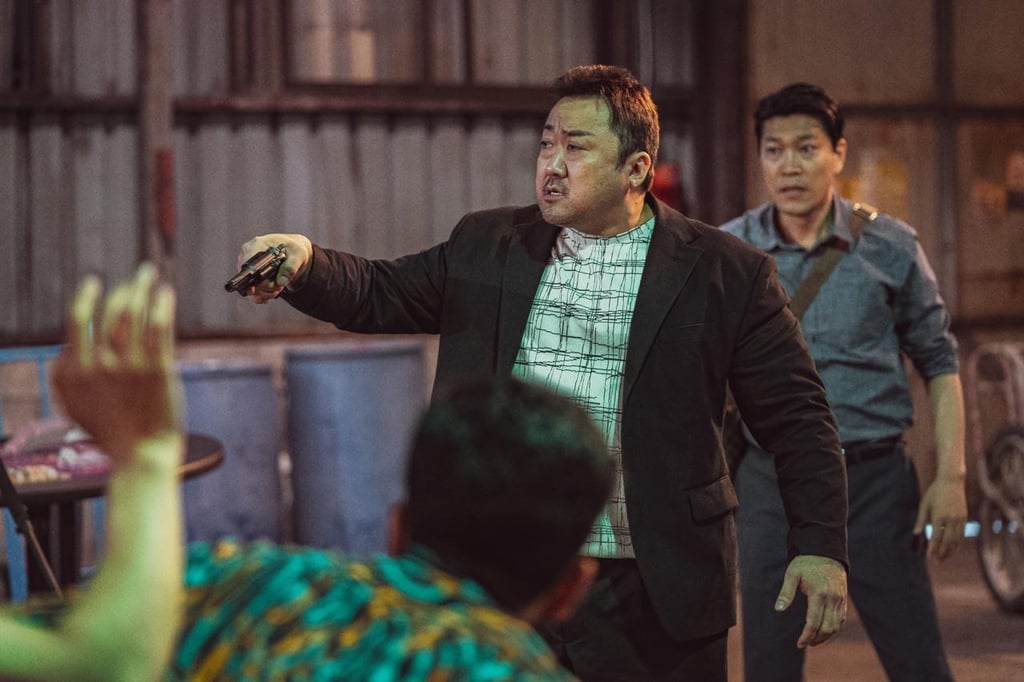 Following up on the success of the 2017 film, The Outlaws, The Roundup is more of the same: and that’s not even close to a bad thing. With its execution as sturdy as they come and a gripping plot that feels like a really good episode of a procedural cop show, Lee Sang-yong steps into the director’s chair to deliver a well-oiled sequence of beatdowns. Harnessing the starpower of its charismatic lead, The Roundup is a tremendously confident action film that may not break new ground but breaks enough bones along the way to be entertaining.

There are few people who can throw a punch as cinematically as Ma Dong-seok. Returning as Detective Ma Seok-do, Ma balances his penchant for dry humor with a physical presence that warns everyone not to be on the receiving end of his ire. When Seok-do and Captain Jeon Il-man (Choi Gwi-hwa) are sent to Vietnam to extradite a suspect back to Korea, their tiny vacation quickly turns into a manhunt as they try and catch Kang Hae-sang (Son Seok-koo) – a murderer who has been killing Korean tourists visiting Vietnam.

There’s plenty of brutality and bloodshed to solidify Hae-sang’s actions as unconscionable, but it’s the glee and seemingly unclear rationale that turns him into a solid villain to rally against. Which is a plus because as The Outlaws demonstrated, the actions that Seok-do and his team will take in order to apprehend a suspect are not exactly kosher either. Now in a country where he has no jurisdiction and a lot of eyes on him ready to deport him at even the mention of any meddling, Seok-do finds himself wrestling with the politics of being an outsider attempting to bring about his own version of justice.

What could be a fascinating glimpse into the bureaucracy that is holding Seok-do back ends up being a much more jovial time at the movies. Despite its subject matter, The Roundup is primarily a vehicle for Ma to pummel bad guys and crack wise – both traits that have been firmly established in the past and are quickly reaffirmed here. The immediacy with which Ma takes over the screen is why even when The Roundup feels like it’s going through the motions, it still has a fervor to its routine. Played against Son’s chaotic performance and Choi’s worrywart humor, Ma is safely tethered between two opposing tones.

Lee’s direction is where The Roundup elevates its cast and their entertaining performances. A robust film complete with the usual network of criminals to sift through and multiple moving parts that take its characters through a variety of seedy locales, Lee maneuvers through it all with a deft hand. Edited by Kim Sun-min (whose credits include Memories of Murder, The Wailing, and The Host), there’s a pace kept throughout The Roundup that never lets up even when the film needs to take a detour to revel in its action setpieces. It’s an assured sense of scope in its narrative and an understanding of how ambitious the film wants to be that keeps the momentum at a steady clip.

When it does dive into those action scenes though, Ma cleans house. As mentioned, there are few actors who can deliver a wallop as effectively as him and the camera knows it. Each scene feels specifically tailored to his strengths and though it winds up resulting in virtually every fight feeling decided before it even begins, there’s still plenty of room within the scenes themselves for a proper sparring. It’s watching characters try to outmatch Seok-do with weapons that feels particularly invigorating as he brings nothing but his bare fists to a knife fight.

There isn’t much to say about The Roundup that makes it a must-see, but action fans will undoubtedly find themselves gripped by Lee’s direction and Ma’s physical performance. It’s an entertaining movie that doesn’t try to do too much despite there being the seeds of a more potentially interesting film spread throughout. With its financial success in South Korea and a sequel already confirmed and in progress, there still remains the hope that there will be a little more meat to the bone next time. If not, you can do a lot worse than an entertaining, comfortable, and reliable action film like The Roundup.

Hard-Boiled Elevates Gunfights to an Artform