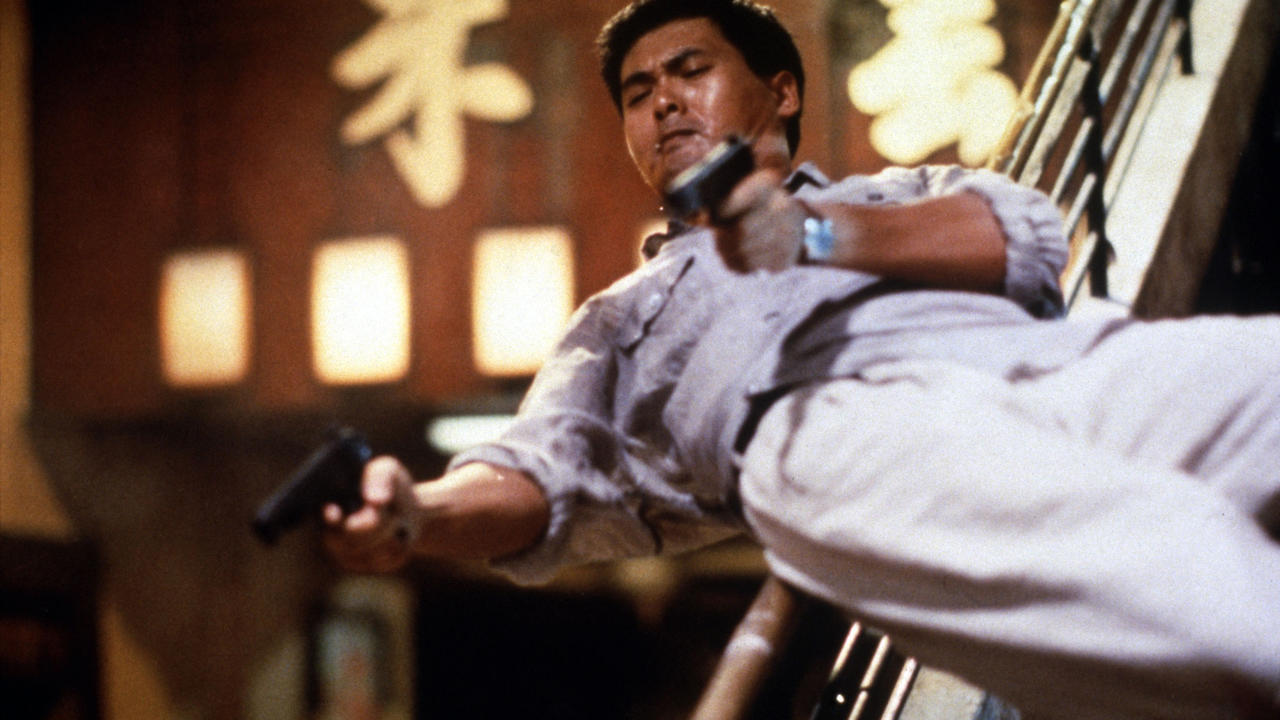 Hong Kong action cinema before the mid-80s was virtually synonymous with the art of Kung-Fu. In the 1970s, there was the iconic Bruce Lee, whose on-screen persona single-handedly raised the nation’s cinematic profile to an international stage, even though he completed just four feature films before his untimely death. Then in the early 80s, Jackie Chan injected both humour and intricacy into the genre, with his action sequences being more elaborate and theatrical than anything before. He’s the only Chinese performer who’s ever rivaled Lee’s global fame, and it’s due to star-making turns in films like Drunken Master and Police Story, the latter of which is considered one of the greatest action films of all time.

But, in 1986, John Woo exploded onto the scene with his epochal A Better Tomorrow, establishing the “Heroic Bloodshed” genre, which took the tropes of Kung-Fu cinema such as dramatic themes revolving around duty, honour, and redemption, but infused them with stylistic gunplay (i.e., Gun-Fu). It was a combination that both excited and enticed, delivering something that was completely new to the industry. The film also cemented Chow Yun-fat as an international star and the undisputed king of the genre. In A Better Tomorrow, Chow Yun-fat surprisingly wasn’t the lead, he was a supporting character that was killed off in the film’s climax. But his popularity was so immense it spearheaded a sequel that centered around his character’s twin brother. Once you see Chow light his cigarette with burning money, it becomes very easy to realize why that sequel was greenlit.

Woo’s sagas of hardened cops and cutthroat Triads (Chinese Organized Gangsters) reached the height of their international acclaim with the release of The Killer in 1989. However, the film failed to generate the same success domestically. Moreover, Woo’s cinematic output was increasingly facing criticism for its unapologetic glorification of Triads. So, the famous duo teamed up one final time for Hard-Boiled, Where Woo’s leading man starred as the cool-as-ice Tequila, a cop who doesn’t play by the rules, just like Clint Eastwood’s famous inspector. Gone are the suave suits and cool sunglasses, and what came was a portrait of a working-class cop that still retained some great anti-hero sensibilities.

This is evident in the opening scene, where Chow’s detective takes a bold swig of his tequila slammer before delivering an excellent jazz saxophone solo. These oddly endearing opening moments effortlessly encapsulate the film’s aura, as Chow’s infectious performance welcomes us into its alluring and glorious neon-lit world.

In Hard-Boiled, Tequila is on a mission to take down the Triad’s illicit Arms trade. He butts heads with Triad Assassin, Alan (Tony Leung), who emerges as an undercover cop who’s earned the trust of prominent senior members. The two slowly begin to trust each other and team up for the explosive finale, which runs over 40 minutes and is easily John Woo’s crowning achievement.

John Woo’s previous efforts practically invented the word “action-packed” but, Hard-Boiled wholeheartedly dwarfs any of them by comparison. The opening “Teahouse Shootout” itself would be the climax to most films, but here it’s just the appetizer. It boasts fluid camera movements that are frantic, yet, elegant-all underpinned by mesmerizing slo-mo that renders flying bodies into picturesque portraits of carnage and bloodshed. It’s an absorbing sequence that virtually glues you to your seat.

Hard-Boiled oozes style and bravado throughout its entire runtime, even when it’s not littering the screen with bullets. This is not only a result of Woo’s impeccable direction but because of the star power on display. Chow was undisputedly the beating heart of this budding genre, and it’s no more evident here. His charisma carries the film as his trademark double-fisted pistols make for iconic imagery that propels each set piece. He also lends a vibrancy to the film’s more comedic moments, making his badass figure even more appealing. It’s rare to see a character retain his cool edge while holding a baby during a ridiculous shootout, but Chow somehow makes it work, and it’s simply magnetic to behold. Woo’s recent action offerings have left much to be desired, and the biggest missing link is the unflinching allure of leading stars like Chow.

Tony Leung, who was Woo’s second favourite leading man (having stared in his politically charged Bullet in the Head), also puts forward a great portrayal of a conflicted undercover cop. Leung was shaping up to be another Hong Kong star, as his collaborations with Wong Kar Wai made him the pre-eminent romantic lead, and Woo’s casting of him cemented a dream duo.

Hard-Boiled is, in many ways, the Heat of the Hong Kong film world, featuring an explosive meet-up between two titans of the industry that delivers with meticulously directed action.

It all culminates in a jaw-dropping finale that turns a hospital into a warzone. It’s a cacophony of symphonic explosions and dangling babies, as Woo puts out all the stops to deliver awe-inspiring sequences, the likes of which are rarely, if ever, matched.

It’s impossible to not mention the famous and utterly astonishing three-minute long take of Chow Yun-fat and Tony Leung absolutely wrecking wave after wave of gangsters. The whole segment is brilliantly shot, cascading in and out of windows, hallways, and elevators in a hypnotic fashion. It runs the gamut of the film’s thematic core, as every bullet is tinged with both honour and moral ambiguity. It’s unabashedly the pinnacle of Woo’s storied career.

In fact, many of the segments consist of long takes, simply because Woo is so completely confident in his chorography, framing, and ultimate vision. The confidence on screen is wholly palpable and it makes for truly memorable filmmaking that will undoubtedly stand the test of time. With so many CGI-dependent action films towering over the industry today, it’s completely refreshing to revisit what Woo accomplished with just a few blood squibs (Well…more than a few).

This would be John Woo’s final Hong Kong action film before America came calling, where he would produce classics like Face/Off, and some not-so classics like Paycheck. He would also reunite with Tony Leung for the epic two-part Red Cliff, which for some marked a return to form for the auteur. Yet, Woo’s final collaboration with Chow Yun-fat is arguably his magnum opus. As it’s a definitive showcase for an artist seeking to redefine the genre he helped spotlight on the world stage.

The Roundup Delivers Justice and Adrenaline