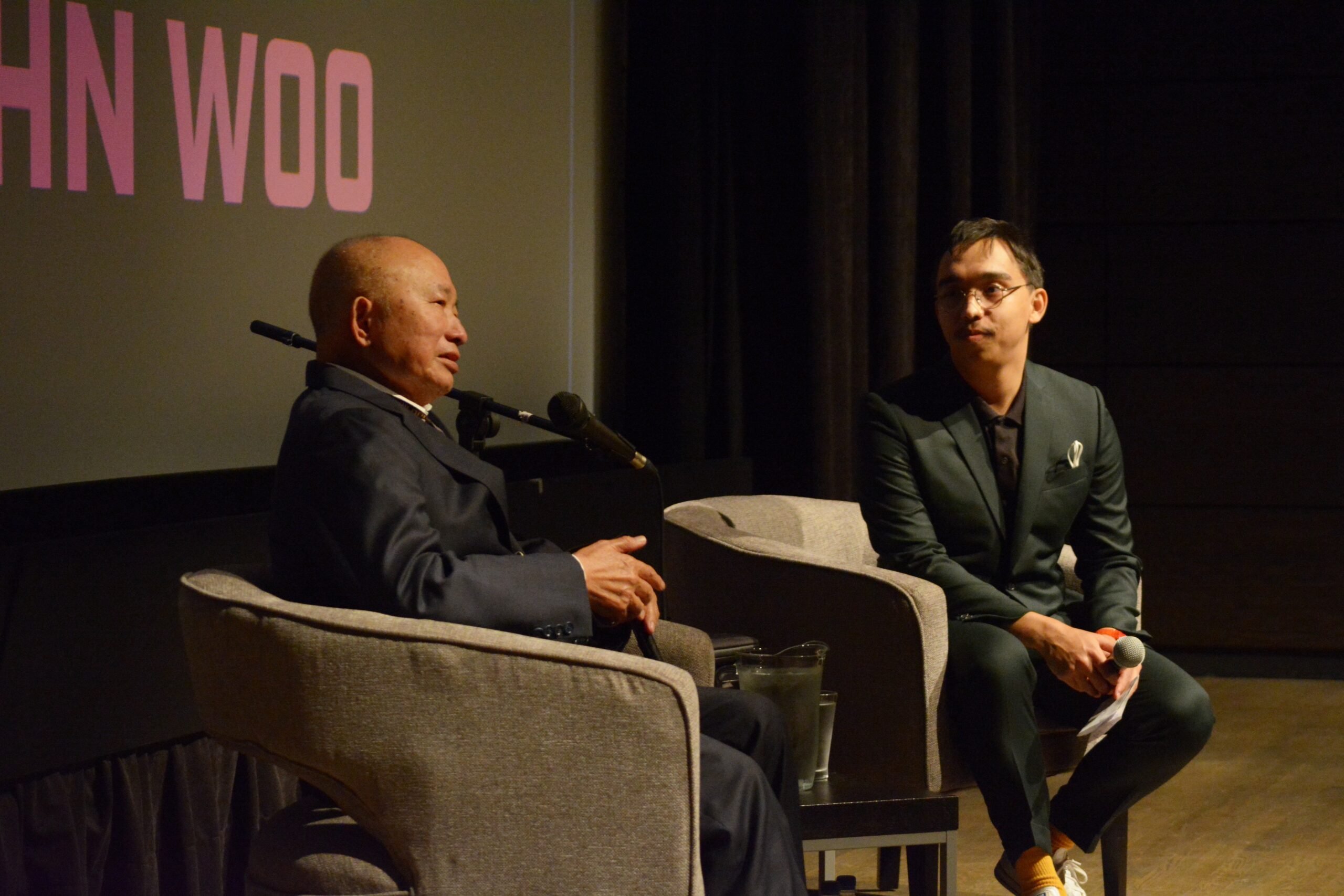 John Woo is honoured at Fantasia

Saturday, July 16th, 2022 in Montreal, Canada. It’s a sweltering afternoon, as it often is at this time of year in the urban jungle of Montreal, the major metropolis of Québec, also known as La Belle Province. Many people strolling past the city’s Museum of Fine Arts are unaware that the sun will be shining inside the building as well for the next couple of hours. Not literally of course, and not really in the museum per se but rather the Cinéma du Musée. The modest, single theatre room establishment is ensconced underneath one of the museum’s buildings. There is a ceiling overhead, but the truth is everyone inside will feel as if they are floating among the clouds. John Woo, the legendary action movie director, is giving a Masterclass at the Fantasia Film Festival.

It was only hours ago on Friday night that he received a lifetime achievement award during a special screening of the revered 1992 film, Hard Boiled. Several lauded filmmakers have been honoured for their careers by the Fantasia Film Festival over the years. It was only a matter of time before John Woo was attributed the distinction. After all, Fantasia is a gathering of not only science-fiction buffs and horror hounds but action movie junkies too. Few directors have provided fans their “fix” with the sort of pomp and daring as Woo.

At 76 he isn’t quite the man he used to be. Aided by a walking stick and sometimes getting around in a wheelchair, he won’t be demonstrating to anyone on set how to jump in the air whilst wielding two pistols. Judging by the quality of the talk he gave for nearly 2 ½ hours, there is no question that the gentleman is still erudite, sharp-witted, and a wonderful storyteller. And lest anyone believe his days in the director’s chair are behind him, he recently completed a 43-day shoot of Silent Night, starring Joel Kinnaman. Furthermore, he’s still exploring new methods, as the film will not have a single line of dialogue. Images and sound will exclusively tell the story, although using amazing visuals to communicate drama is not something Woo is unfamiliar with! From The Killer, to Face/Of, to Red Cliff, the veteran director knows a thing or two about making great looking films.

If at first the notion of the John Woo directing a film without any dialogue is surprising, it’s debatable as to whether he himself thinks so. He opened his generous Masterclass with a pinch of advice to hopeful filmmakers in the audience: every project is different and a new learning opportunity.

From there the septuagenarian regaled those present with stories spanning his entire career. He is mostly known for his 80s Hong Kong ballets of bullets films and the near-decade he spent in Hollywood from the mid-90s to 2003. One of the many terrific benefits of the discussion was understanding his filmmaking background and the projects that helped him climb the Hong Kong studio system, a very different beast from the one in Los Angeles.

After his 1974 debut with The Young Dragons, Woo was assigned a few comedy projects such as Money Crazy and Follow the Star. Today, virtually no one associates the director with comedies, even though he still sports a winning smile. His time in Hong Kong in the 1970s and 1980s made him the director the world knows him to be. But of course, few people can accomplish such feats on their own. One of the recurring themes during Woo’s talk was how important honour and friendship are. A devout Christian, he deeply believes in helping others, and he has been fortunate enough to receive assistance in return at times. It was John Woo who encouraged producers to give up and comer Tsui Hark a chance at directing. When Woo fell on harder times for a spell in the 80s, it was Hark who vouched for Woo to make A Better Tomorrow.

Events such as these serve as terrific reminders that everyone is made up of hundreds of small parts. Influences, friendships, dumb luck, personal interests, every person’s journey through life evolves organically via whatever is thrown their way. John Woo adores musicals and cites that when planning and shooting action scenes he often has music playing in his head. No wonder his Hong Kong gunslinging flicks have an operatic quality about them. He himself was dumbfounded when pinned for jokey films because he had always wanted to make his version of Le Samourai, the oft-cited French neo-noir starring Alain Delon. A cool cat, serious face, no-nonsense.

Working with Jackie Chan in his late teens and slapping him awake after the stunt performer passed out, convincing his cast and crew that running and jumping with two guns was awesome by doing it himself, having a pep talk with Tom Cruise on the set of Mission: Impossible 2 when the start couldn’t understand why so many cameras were shooting (“To make you look beautiful.” That was good enough!), test screening comments proving that his original idea for Face/Off’s ending was justified, etc. Woo has no shortage of stories to share and, had the museum not had other events planned later in the day, it felt as if he’s had gone on all day and night. He knows how to play a crowd too.

“I don’t know kung fu. I’ve never shot a real gun. I don’t do drugs. But I can make a good action scene.”

Not the Sunset Yet

When all was said and done the room awarded Woo with something no trophy can replace: warm applause and cries of adoration. His time at Fantasia had come to an end, but not his time making movies. He left the audience with some mouth-watering teases. He is in the planning stages to remake one of his own classics, The Killer. This time possibly with a female lead. He referenced that his appreciation of Montreal and the province of Québec will maybe, MAYBE, influence his decision on shooting locations.

Whether serious or not, at that point it didn’t matter. He had won the room the moment he appeared over 2 hours ago.

Princesse Dragon is a Beautifully Animated and Familiar Fairy Tale