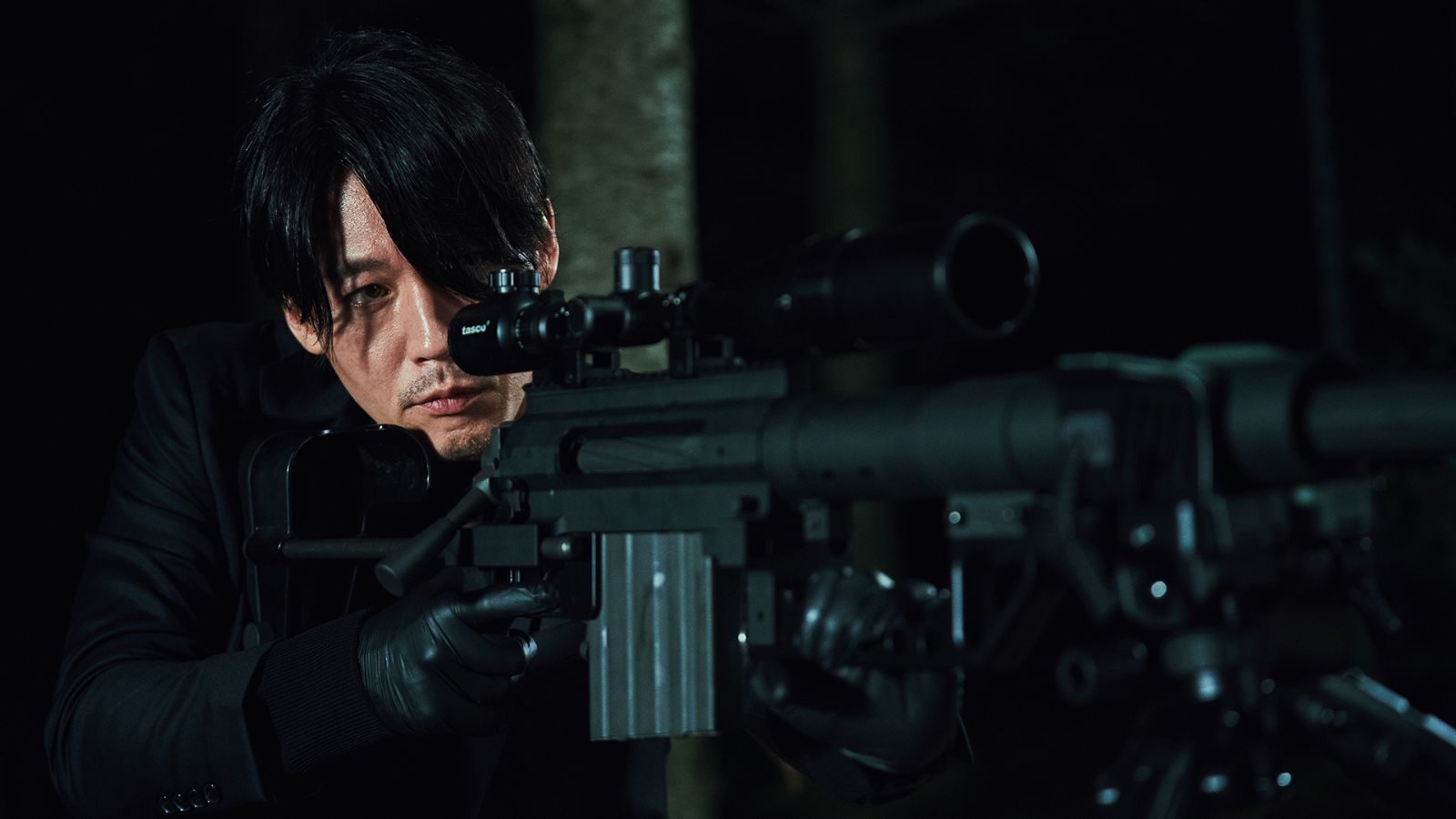 The Killer is a shiny new action film from director Choi Jae-hun, the latter working once again with actor Jang Hyuk after 2020’s The Swordsman. No, this Killer is not to be confused with the classic John Woo shoot’em up bonanza, or the upcoming neo-noir from David Fincher. Hold on a moment. Did we not just have his conversation at the start of our The Protector review? This year’s Fantasia Film Festival has not been great for film titles. It’s either confusing because it sounds exactly like a more popular film, or just deliberately complicated (The Cow Who Sang a Song Into the Future). The film is an adaptation of a novel from Bang Jin-ho titled A Girl Who Deserves to Die. Depending on which website one looks up Choi Jae-hun’s endeavour, the book’s name also serves as the movie’s subtitle.

So the name is a little redundant. Fair enough. Surely the plot strives to distinguish itself. Well…Bang Eui-kang (Jang Huyk) is a contract killer who has earned himself a comfortable life. A beautiful home, a gorgeous wife (Lee Chae-young), everything is peachy. His better half suddenly informs him that for the next 3 weeks he’ll babysit Yoon-ji (Lee Seo-young), the 17-year-old daughter of one of her lady friends while they have fun in the sun. Brilliant. Eui-kang nonchalantly picks the girl up from school the next day along with one of her classmates. As fate should have it, that friend was in truth hoping to lure Yoon-ji into a sex slave market. Very quickly Eui-kang foils the plan but his dirty work gets police detective Lee Young-ho (Lee Seung-joon) involved with an investigation. To make matters worse, the sex traffickers get a hold of Yoon-ji anyways shortly thereafter. Why are they so intent on using this specific girl, and can Eui-kang squash the entire ordeal before his wife and the victim’s mother return from vacation? Taken, eat your heart out.

Netflix recently released its most expensive production ever, The Gray Man. In it, a covert government assassin turned rogue must disrupt his former employer’s plans and save a teenage girl he recently grew attached to. Ryan Gosling’s “Six” is quiet but charming, aloof but efficient, tactical and deadly. At the risk of making a blunt and sweeping statement, if The Killer: A Girl Who Deserves to Die were remade by Hollywood, just a few plot points would need alterations. In fact, star Jang Hyuk is like the South Korean Ryan Gosling. He’s quietly charming, his jokes are hushed and subtle, he carries an aloof look on his face, and he’s ruthless when the time comes to lay people to waste.

So far, this review’s comments and maybe even its tone suggest that Choi Jae-hun’s The Killer is not worth anyone’s time. That’s not true. Being compared to Ryan Gosling isn’t necessarily a bad thing. That goes for the Canadian’s performance in The Gray Man. Being so aloof-looking and quiet yet still funny and engaging is a tough act. Jang Hyuk genuinely pulls it off as well. Whether he does so better than Gosling or not is up for debate. The point is that the Korean has a magnetism that serves him and the movie nicely. He’s a killer alright and getting him peeved is the last thing anyone should want to do, yet he is still fun to tag along with as he investigates the tentacular Korean sex traffic. His character’s relationship with the teenage Yoon-ji never warms up to the point where they’ll hug or laugh at each other’s jokes. It’s more akin to the notion that people tease those they appreciate, and Eui-kang teases the lonely girl quite a bit in his taciturn way.

For all intents and purposes, the story and character relationships are secondary when watching a film of this ilk. When they’re good it’s a nice bonus, as is the case here. This movie is advertised as a brutal actioner, and it delivers on that front with a hammering fist. Credit goes to director Jae-hun and his stunt and photography team. What catches the eye is how slick the production is. Here is a film that proudly shows off the stunt work. The kicks, the punches, the ducks, the running, the falling, all of it is on full display. Granted, after three John Wick films it surely must be challenging for filmmakers to come up with original corridor fight scenes, but The Killer’s team keeps the proceedings lively and bloody enough to impress.

Speaking of photography, the lighting is terrific. Yong-gab Lee serves as cinematographer and his skillset provides the picture with a great variety of colours and shadows for locations most action movie junkies have seen a thousand times over. The backdoor storage room to a dingy office is a tired trope. here it’s lit with shafts of purple light emanating from a neighbouring room, presumably used for illicit rumpy pumpy.

If A Girl Who Deserves to Die merits any serious complaints, it’s that the protagonist is too efficient. He encounters foes who are nowhere near on his level. To be as wealthy as he is in his profession, the man is obviously good at obliterating human beings. Once again, the choreography is second to none, as is the filmmaking itself. It’s just that no one ever poses a serious threat. One serious contender is thrown into the mix (Bruce Kahn), but Eui-kang is so ruthless in his fights that the lack of screen time given to his chief rival results in the latter’s threat level never reaching a critical point.

One knows exactly what they’ll get with The Killer. If that’s what one wants, then director Choi-Jae-hun has something delicious cooked and ready to serve. If familiar action movie tropes about loner hitmen doesn’t strike one’s fancy, then simply don’t watch this movie. It is a perfect example of the expression “it is what it is.” Even within that context, it’s very slickly made and is headlined by a magnetic leading man. If the character is ever seen again on the silver screen, hopefully his challenger will be more up to the task.

Luck Just Doesn’t Have That Magic