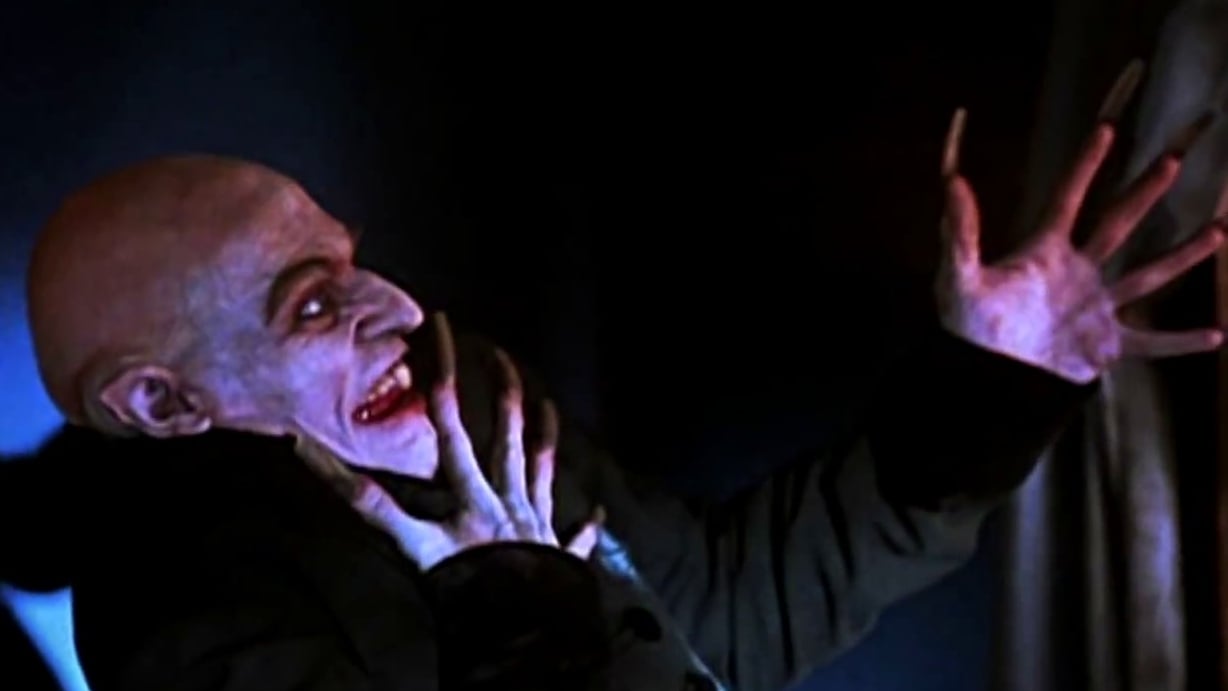 Revisiting Shadow of the Vampire

You’d be hard-pressed to find a medium as self-reflexive, as preoccupied with its own history, as film. From Gods and Monsters to Hitchcock to Ed Wood, filmmakers and the act of filmmaking have itself been the subject of many films, with many if not most of them depicting their subjects with reverence, adoration, or at least affection. But then, on the other hand, there’s E. Elias Merhige’s 2000 film Shadow of the Vampire, which on the surface depicts the production of F.W Murnau’s silent horror classic Nosferatu. But Shadow isn’t as straightforward as many of its peers in the “Films about film” subgenre.

Rather than depicting the actual filming of Nosferatu, Merhige’s film throws two major twists into the story. Most importantly, it posits the idea that actor Max Schreck, who portrayed the vampire Count Orlok, actually was a vampire that had been found and hired by Murnau to appear in the film. The second wrinkle, which the first one may have clued you into, is that the film’s version of the hugely influential director is depicted as a dangerous obsessive, willing to endanger his cast and crew in the name of finishing his masterpiece. These two creative liberties work together to make Shadow far more than simple idol worship, and perhaps the exact opposite: a film about the dangers of obsession, the lengths men will go to to leave their mark on the world, and the predatory dangers that still lurk in within the film industry.

While John Malkovich headlines as Murnau, and brings a terrific performance, the star attraction in Shadow is undoubtedly Willem DaFoe, who attacks the role of Count Orlok with characteristic gusto. DaFoe is firing on all cylinders here, turning the character played with an animalistic otherness by the real Max Schreck and a haunting melancholy by Klaus Kinski into a gleefully sadistic fiend. His performance is often wildly camp, and Dafoe spends much of his time on screen leering and twitching, grinning mirthfully while rubbing his clawed hands together in cartoonish villainy. One could argue that his performance, and perhaps some of the others like Cary Elwes’ bafflingly accented cameraman, take away from the seriousness of the film. But frankly, it’s so fun watching DaFoe onscreen that it’s hard to care about anything else. “The script girl”, he sniggers, “I’ll eat her later”.

But as captivating as DaFoe is in the film, his gleeful, naked evil isn’t really what the film is concerned with. While Schreck is absolutely a danger to just about everyone he encounters, the horror the film is most interested in is much more human in origin. It would be very easy to look at Shadow of the Vampire and reduce its meaning to something along the lines of “man was the real monster all along”, but that would be a gross oversimplification. Really, the film is more concerned with the dangerous lengths creators can and have gone to in order to see their vision completed, and the degree to which we condone those lengths.

This is an especially big problem within the film industry, whose history is littered with figurative and literal bodies. Ask any film historian and they’ll talk to you for hours about the stories of people who were chewed up and spat out by the film business, both in Hollywood and elsewhere. And more often than we’d like, Hollywood and other national cinemas are places where monsters are allowed to roam free, their horrifying intentions ignored by those in power either out of convenience or in the pursuit of art. It doesn’t matter that people are put in the path of predators, what matters is the picture. “If it’s not in the frame, it doesn’t exist”, says Murnau at the film’s climax, as he literally directs his monster over the bodies of his cast and crew.

And with this depiction of a creative willing to commit unquestionably evil acts to achieve their goal, the film asks the question lurking at its very core: to what degree does art justify the actions of the artist. Many will argue that great art demands suffering, on the part of the artist but perhaps also those around them. But Shadow takes that idea to extremes.

Of course in the case of the events of the film, it is an extreme example of the kind of wanton cruelty and predation that writer Steven Katz is subtextually discussing. Hopefully, we can all agree that multiple human lives are definitely not worth a film, horror classic, or otherwise. The events of the film obviously cross a line, and nobody could argue that this much suffering is worth the art it is supposedly in service of. But just where is that line? Just how far is this fictionalized version of Murnau, who puts his cast and crew in danger with callous disregard for human life, from directors who push their actors to physical and emotional extremes in the name of authenticity? In all likelihood, probably not as far as we’d like to think.

The fact that the film uses Murnau to make this point also raises numerous questions that the film community continues to grapple with: can we separate the art from the artist? Any horror fan will tell you about the massive legacy left by Nosferatu, and the unquestioned genius of its director. But what if we learned that a legacy as monolithic as that of Nosferatu was built on a foundation of cruelty and outright evil, that a legendary genius was revealed to be a greater monster than anything they had put to the screen? Would you be ready to disavow them, or like Murnau, would you focus only on what’s in the frame, and isolate the film from the context under which it was created? Would you allow the work to stand on its own, or would the price be too high?

There is a degree to which the film’s lofty ideas and questions are more interesting than the film itself, though. The film races to the finish in the third act, introducing characters at the last minute and losing a sense of focus in the process. And while the two leads are excellent, the secondary performances leave a lot to be desired. But these minor problems aside, this is a film demanding to be rediscovered, especially given the fact that it has never received a North American Blu-Ray release and the DVD is both out of print and of questionable quality. Twenty years on, it remains entertaining, furiously acted and unsettlingly relevant.