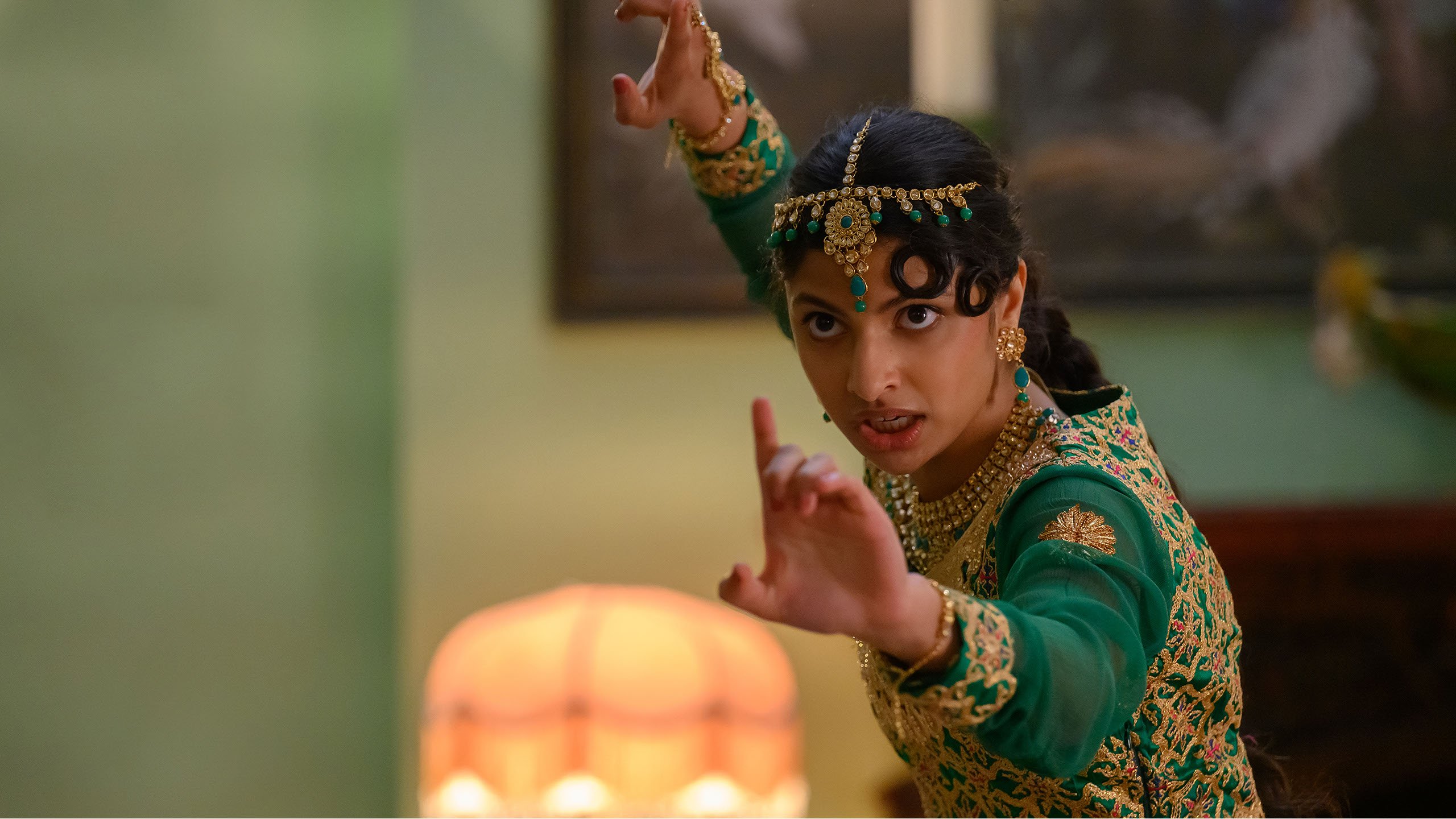 Nida Manzoor’s Polite Society is the kind of film that not only wears its influences but must let the audience know that they exist. There’s a frustration with any film that evokes the works of Jane Austen and references her when acknowledging its similarities narratively. It doesn’t break the fourth wall, but it knows it’s using tropes, so characters will end up joking about them. It still uses them, though, and that’s part of the problem with Polite Society’s attempts to put a fresh spin on an otherwise mundane story, punched up just enough to be mildly entertaining.

Manzoor’s greatest decision is to view the world of the film through the eyes of Ria Khan (Priya Kansara) – a young British-Pakistani student who aspires to be a stuntwoman. Her love for movies makes her see the world as if every moment is a part of her narrative. That passion extends to stylistic flourishes comparable to Edgar Wright’s films with fast-paced edits that give the film a consistently forward momentum. Chapters are spelled out on screen, and fight scenes have the competitors listed for the audience. Ria lives in her head and the audience witnesses what that is like throughout Polite Society.

When her older sister, Lena (Ritu Arya), drops out of art school and finds herself having more time with Ria to help with her stunt videos, it’s a bond that Ria hopes will never break. Their relationship is the crux of Manzoor’s screenplay, and even as it starts spiraling further and further into absurdity, it clings to Ria and Lena’s power together. However, that relationship is threatened when Lena falls in love with Salim (Akshay Khanna) – a wealthy young man who hosts a party at his mother’s (Nimra Bucha) behest, hoping to meet a potential suitor. It’s essentially one step removed from an arranged marriage, but Lena is in love with Salim, which Ria finds impossible to comprehend.

Believing something nefarious to be afoot, Ria enlists the help of her two best friends (played by Seraphina Beh and Ella Brucceri), and they hatch a scheme to save Lena from marrying a man that Ria believes has other plans for her. As previously mentioned, the film breaks itself up into chapters, and for the most part, they each have their action moments. The audience is taken into her film-riddled brain, which allows Polite Society to feature fight scenes in schools and sibling rivalry gone awry in an over-the-top manner that is seen as normal to the other characters. It’s very much in the vein of Scott Pilgrim vs. The World, where each ex-boyfriend of Ramona’s was treated like a boss fight, with everyone in that universe behaving calmly when massive brawls break out.

The benefit to treating every roadblock as if it matters more than it does is that Manzoor gets to punctuate relatively brisk pacing with some action sequences. They’re not the best in choreography or editing, but they’re serviceable and elevated by the commitment to treating low-stakes fights as if they are a fight for survival. Environments are destroyed, and Ria will often scream, “I am the Fury!” before she lets off her signature martial arts move that she’s been attempting to perfect – often to disappointing results.

However, for a film built around its love of martial arts cinema and even Bollywood films, it surprisingly feels like a side-effect of its stylistic intent rather than a main course. The Bollywood inclusion is surprisingly bare until the final act, where it finally takes precedence, including a scene-stealing song-and-dance number that ties into the narrative perfectly. It’s a shame there’s not more of it, but the biggest problem with Polite Society is that it seems to want to do a lot. The action isn’t memorable in any way, the comedy rarely lands (though that ends up being unintentionally endearing instead of a problem), its setpieces are dazzling but underutilized, and the actual twist of the film has so many compelling ideas, but there’s no meaningful exploration of any.

Polite Society’s greatest weakness is that it cares too much about its sisterly bond for any of its personality to stick out. Everything evokes something else, and it loses its thematic subtext in its laser focus on crafting a solid but unremarkable action plot. The performances are what carry the film. It’s not an uninspired film, and that’s the disappointing element of it because everything it decides to pull in feels like a carbon copy of something else just grafted onto a strong relationship. The passion for its characters and the fear of losing your only support system is strongly felt throughout Polite Society; it’s just too preoccupied with leaving an impression that it ends up leaving none.

Infinity Pool is a Perverse Journey Through Excessive Wealth