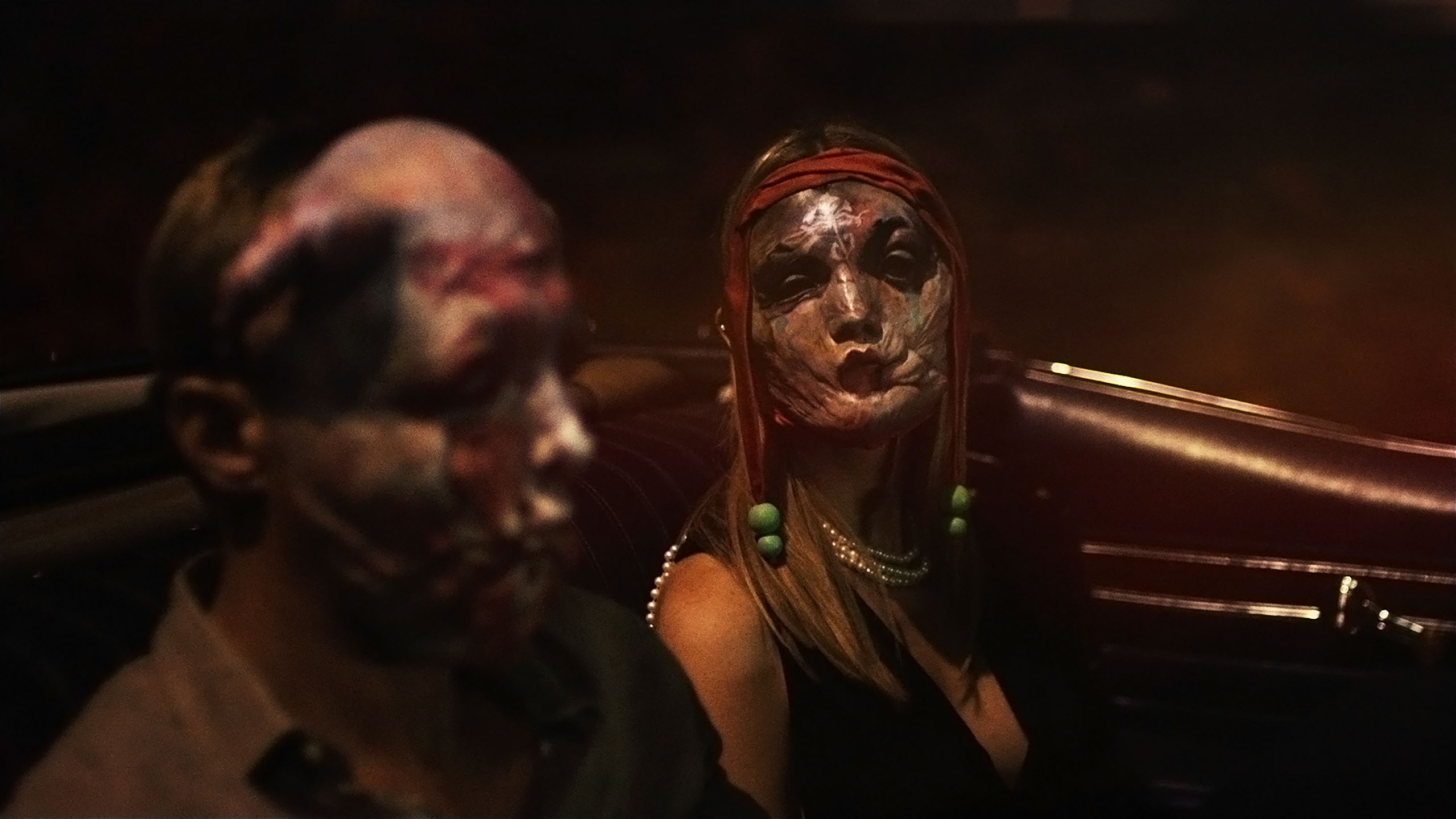 Brandon Cronenberg’s latest head trip is a surprisingly cohesive and concise narrative that’s less preoccupied with its science fiction conceit and more with the willingness to exploit systems and others at every opportunity. Infinity Pool is a hedonistic descent into a world of privilege. It is uniquely vile in its insular community of wealthy tourists taking advantage of the allowances provided to them – and the lengths they will go to to have a little fun. Scathing in its portrayal of wealth as a keycard to unimaginable freedom, Cronenberg’s third feature film is easily his best as it taps into a level of excess and desire for more without losing itself in the carnage of it all.

Through the unprivileged, the audience is provided entrance to an exclusive club of debauchery. James Foster (Alexander Skarsgård) is a penniless author who wrote one book six years ago that no one read and deemed a failure. He is currently on vacation in the fictional region of Li Tolqa with his wealthy wife, Em (Cleopatra Coleman), hoping to catch some inspiration when he runs into Gabi and Alban (played by Mia Goth and Jalil Lespert, respectively). Gabi turns out to be starstruck as she has actually read James’s book, and the two couples take off from the resort for a bit of fun in the sun.

Where Infinity Pool takes its turn is when Cronenberg’s screenplay begins uncoiling. After a day of drinking and relaxing on the coast, James accidentally runs over a local with his wife, Gabi, and Alban present in the car. Wracked with guilt, he’s quickly summoned by the police and sentenced to death by execution. However, he’s saved by a law that Li Tolqa has enacted to maintain a good standing relationship with the tourism industry: James can have a clone made of himself to take his spot in the execution, for a fee, of course. The clone retains his memories and is exact in every way, so he will feel the same feelings as James but will die just as soon as he feels them.

The concept opens up a whole new world of potential and is not a law that is unfamiliar to Gabi and Alban. Very quickly, Em flees from Li Tolqa. At the same time, James tries to find his passport, which has gone missing, and is invited to join a group of other tourists who know about the cloning process and seek new thrills because of it. From here, Infinity Pool becomes a violent, gory nightmare that doesn’t even attempt to walk a line of morality. Bodily fluids of every sort are dispatched throughout James’s journey into madness, and those who can tolerate violence on screen may be pushed a little to their limits as the wealthy try to push themselves past their limits.

Surprisingly, the cloning element comes up throughout but never feels imperative to the narrative. It’s understood very quickly that the exploitation of Li Tolqa’s unique law is simply there to keep things insulated. Wealthy foreign tourists will pretend there are no rules, so putting up the pretense of rules just makes the rich feel like they’re getting away with something thanks to their money. After all, the cloning process only happens if you have the money to pay for it. They are getting away with it, though, which is the bit that Cronenberg seems hellbent on emphasizing.

Just as much, though, Infinity Pool finds meaning in what those who don’t have excessive wealth are willing to do to fit into that group. James is penniless without his wife, but he’s also the only one who is up for the grotesque and demeaning games that Gabi and all her friends partake in. Introduced to a new world of demented pleasure, Cronenberg begins leaning into a hypnotic sensory experience unlike anything James has ever experienced – with his new rich friends guiding him along the way.

Those familiar with Cronenberg’s previous work, and especially Possessor, will find themselves in familiar territory with the way that the director indulges in mesmerizing visuals that are entrancing nightmares. With photography from Karim Hussain again and James Vandewater splicing together the delirious imagery of Infinity Pool, it ends up being one of the most visually engaging elements of the film. Thankfully, unlike Possessor, Cronenberg doesn’t lean on it too much, but it accentuates the already unstable headspace of its central character.

However, there’s much more to the hellscape Infinity Pool creates. The incorporation of religion is fascinating in the way the wealthy parade around their disregard for the local culture by wearing masks that hold significance to the people of Li Tolqa as they murder their way through a paycheck. Tim Hecker’s dissonant score plays in the background as no one in Li Tolqa feels safe anymore. It builds to the stunning final act that pushes beyond the perverse and confronts whatever humanity is left in this world. Throughout it all, the performances remain inspired as Goth and Skarsgård commit to degeneracy with an enthusiasm and intensity that puts a fine point on the insanity that Cronenberg is selling.

The reality is that Infinity Pool is not saying anything particularly new, but it is saying it as bluntly and concisely as possible. There is a level of privilege that money can buy, and for some, it is a slippery slope that can lead to new frontiers of depravity. So for every disturbing image unveiled in Cronenberg’s latest nightmare, he’s also polishing off an exacting critique of class systems, privilege, and the way money doesn’t suddenly corrupt without being given the power to corrupt first. Infinity Pool is the most depraved interpretation of giving an inch to someone and them taking a mile – and it’s a hell of a ride the whole way through.

The Persian Version is a Triumphant Family Tale

Polite Society Fights Against Its Own Influences