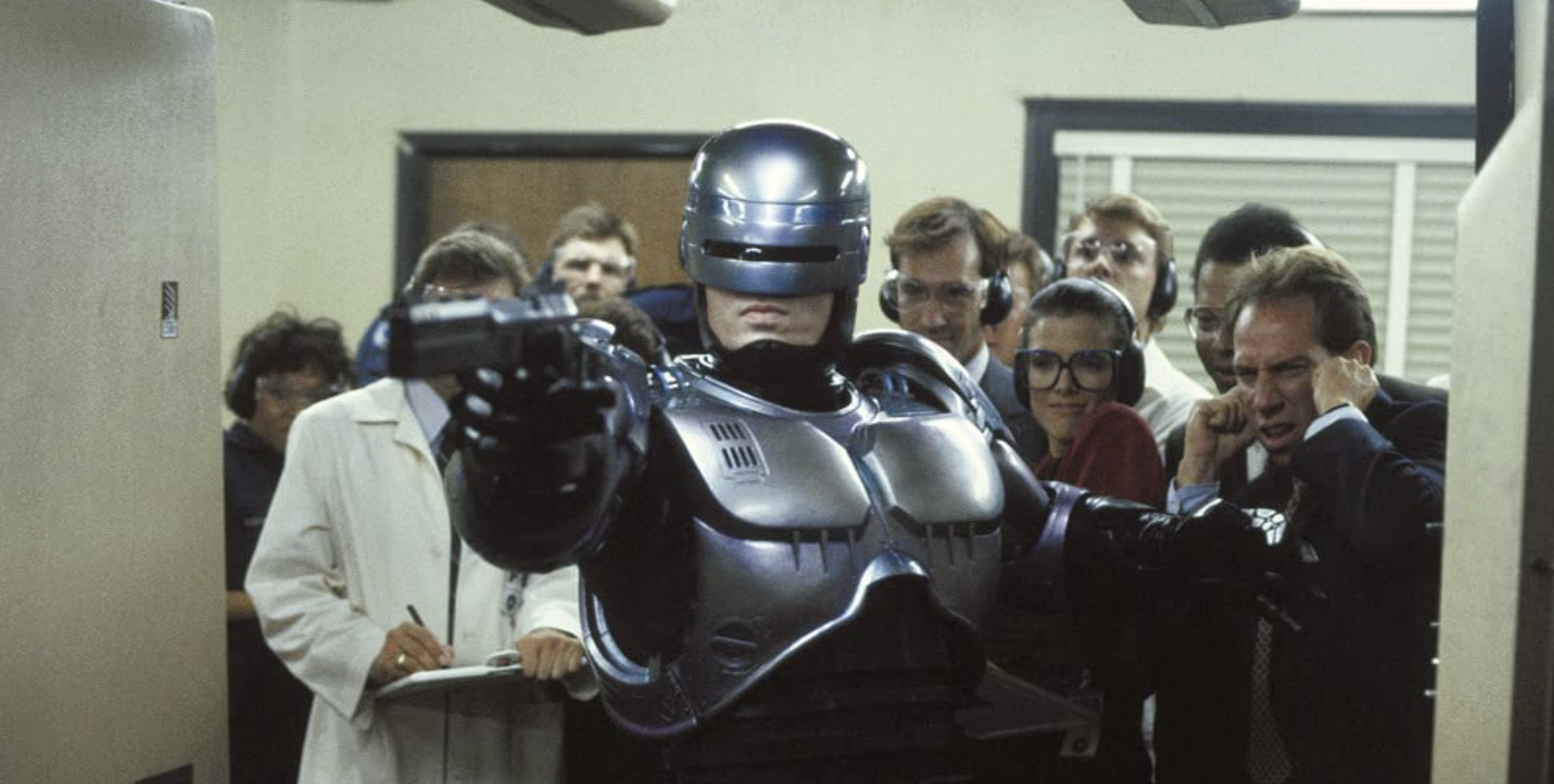 A lot of people probably remember 1987’s RoboCop as a movie with pro-law and order politics. A movie, that is, about a city with an out-of-control crime wave in which it took a cyborg to get the dastardly criminals in line. There were probably a nontrivial number of people in 1987 who secretly wished Robocop were real and could do something about out-of-control crime – and some probably wish for that to this day.

But of course, the film, directed by Paul Verhoeven, isn’t that at all. It’s a razor-sharp satire that is really a brief against fascism. Its ultimate villains aren’t street criminals, but rather an evil corporation, seeking to exploit skyrocketing crime for profit, even if requires either deploying killing machines on the street, or even engineering a police strike.

Made from a script by Edward Neumeier and Michael Miner, RoboCop’s satire remains sharp even today. Aside from some period-specific filmmaking choices, the film hasn’t aged a day.

Peter Weller plays Alex Murphy, a Detroit cop murdered by a criminal gang who is eventually revived as the titular cyborg, an unstoppable super-cop who frequently stops crimes in progress and can never get hurt. (One scene, in which RoboCop confronts and shoots a pair of rapists, inspired one of the greatest pop culture parodies of all time.)

It’s a period of awful violence even by Detroit standards, and there’s even a scene in which a former city councilman holds the mayor and another councilman hostage, which recalls the Milk/Moscone murders in San Francisco.

Robocop is the brainchild of Omni Consumer Products (OCP), an evil corporate entity that has been granted control of the Detroit Police Department. Their first idea was the ED-209, a full-on killing robot. But after that robot gruesomely kills a company executive in a board meeting, they go with the idea of a junior executive Bob Morton (Miguel Ferrer), which is more like the RoboCop that ultimately arrives.

Morton is a fantastic character, an era-specific soulless yuppie whose pick-me ambition always comes first. It’s a movie with many villains, including the corporate bosses ( Daniel O’Herlihy and Ronny Cox), as well as the criminal gang in which several members— Kurtwood Smith, Ray Wise, and Paul McCrane — happen to be played by first-rate character actors.

A lot of movies utilize fake newscasts, but RoboCop did a better job with that than any other. The newscasts depict a dystopian hell in which, for instance, two former presidents of the United States perishing in a wildfire isn’t even the top story. They also come complete with commercials, which are also one of the best parts of the movie.

RoboCop quickly emerges as a folk hero, but a current emerges that he’s figuring out his lost humanity, while also being manipulated by the evil corporate overlords. The film ends with a moment of triumph.

While Flesh+Blood was technically Verhoeven’s first Hollywood film (Orion Pictures funded it, but it was shot overseas), RoboCop kicked off the run that was followed by Total Recall and Basic Instinct, which led to the more controversial Showgirls and Starship Troopers. RoboCop was the first of his movies to be wildly misunderstood, but it was hardly the last.

As for the RoboCop franchise, there were two sequels, multiple TV series, and a 2014 remake, none of which had Verhoeven’s involvement. But the first movie was the one that counts and was one of the most incisive films of the 1980s.