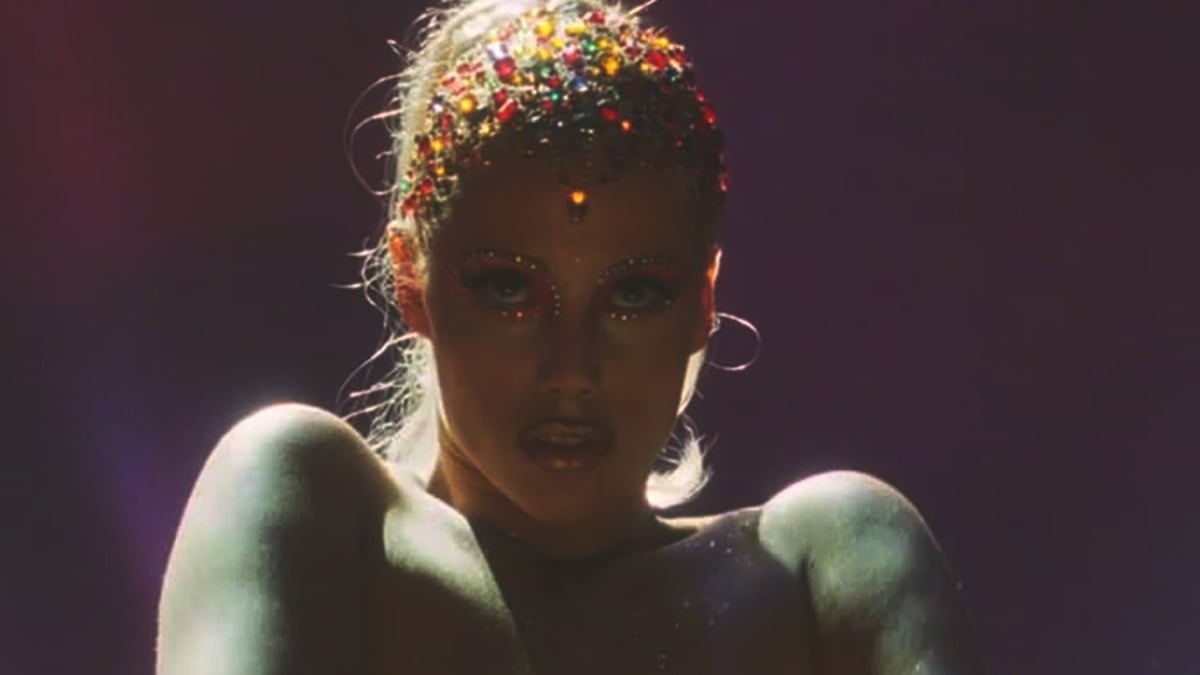 Adored by legions as a supposed trash classic, beloved seriously by the likes of Jacques Rivette and Jonathan Rosenbaum, and hated by as many more, Paul Verhoeven’s 1995 film Showgirls is one of the most peculiar pictures ever released in the history of American studio filmmaking. Showgirls has played many roles within the popular imagination since its release twenty-five years ago, from box office bomb to home video success story, from critical laughingstock to midnight sensation. It’s been both derided and acclaimed for its camp sensibility, Lifeforce levels of nudity, and Elizabeth Berkeley’s outrageously over-the-top performance as showgirl Nomi Malone. Show this film to almost anyone and they’d agree that it’s disgusting, but I have to confess that I find myself among the camp that thinks it’s disgustingly brilliant: all guilt, no pleasure.

Showgirls opens on Nomi, a naïve girl with a shady past, who hitchhikes to Las Vegas with only a suitcase and a dream to become a dancer. She lands a gig at Cheetah’s, a topless lounge where anything goes, so long as it comes with a generous tip. The pay is decent but the job isn’t, and she yearns for more, specifically the starring role in the Stardust Casino’s stage show, which looks something like a cross between Cirque du Soleil and an erotic Rainforest Cafe. Little does she know that once she lands her big break and leaves the slim pickings and small-time tricks to the other girls, all won’t be well: the glitz of the Las Vegas strip is merely a masquerade for the same sleaze she thought she left behind. It’s a carnival of depravity run by monkeys wearing makeup.

All Guilt, No Pleasure

Verhoeven, like Harmony Korine, would do almost two decades later in the similarly attractive but off-putting Spring Breakers creates a film of such polarity as to almost render the whole thing neutral. Sex and nudity (which Showgirls contains a lot of) are so capital-S Sexy that they become distinctly unsexy. The images in Showgirls are lurid and distasteful to a degree that leaves room for little else other than the viewer’s gut response, which might explain the film’s initial failure and its later ravenous following. A misleading male gaze blankets Showgirls and Spring Breakers, but beneath the surface of the two exists an almost Lynchian underworld of inhumanity and perversion. Unlike Korine, who weaves his film together with a dreamlike quality that can best be described as “beautiful,” Verhoeven has no time for good taste. Only a thin layer of lip gloss lacquers the vomit.

Like the best erotic thrillers (think Brian De Palma, particularly Body Double), Showgirls is all about the surface, but Verhoeven ratchets that up to a nauseatingly Nth degree. If Showgirls had a mood board, it would consist of rhinestones, cheetah print, leather fringe, acrylic nails, Kyle MacLachlan’s spray tan, and sexual tension. Verhoeven drowns the movie in nail polish pinks and garish lavenders; pastel and neon are never in short supply. The characters in this film consume consume consume, and Verhoeven makes their meals look more disgusting than any this side of Tim and Eric. From the film’s opening moments, Nomi and associates scarf down Big Gulps, fries, chips, Ring Pops, burgers, lobster, beer, and champagne, and that’s not even including genital unmentionables. When they’re not eating food, they’re talking about it; Nomi and her muse/nemesis, Cristal Connors, discuss their love of dog food, an apt metaphor for how Showgirls feels about the habits of American consumers.

We’ve established that it’s about consumption and greed, but ultimately, Showgirls is less interested in the people who buy into mass media fantasy than the hucksters who spin and sell it. There’s a clear parallel here between the twin worlds of topless lounges and stage shows and the divide that exists between pornography and Hollywood. After the success of Verhoeven’s prior film, Basic Instinct, a thriller all about the sexual tease of violence, he must have tapped into something about the American consciousness other filmmakers weren’t self-aware enough to figure out. Like stripping and exotic dancing, a fine line separates these two image-based industries. The same lust for fantasy that drives the movie business also drives the porn industry. The American incarnations of these businesses might appear in bad taste to an outsider like Verhoeven, but at least pornography doesn’t try to hide under a whole lot of camp and circumstance. In a world where women aren’t worth anything more than, in one character’s words, the useless piece of skin around their genitals, apparently the kindest thing a man can do is be honest about his devious intentions. At the end of the film, Nomi flees the Sodom of Las Vegas for the Gomorrah of Los Angeles, a conscious decision that drives its point home. I don’t think Verhoeven and his screenwriter, that horny Hungarian mother Joe Eszterhas, hate their adopted country; Showgirls is too slick with camp for that to be the case. But I don’t think they have much hope for it either.

Calling a film a nauseating exercise in bad taste might sound like an insult, but in the case of Showgirls, I mean it as a compliment. Its nightmare of porniness predicts David Lynch’s Lost Highway and Mulholland Drive, albeit with less dream logic, as well as Stanley Kubrick’s Eyes Wide Shut, another self-reflexive erotic thriller with an uncomfortably hilarious amount of sexual tension. I disagree with the notion that Showgirls is so bad it’s good; it’s not bad, it’s just good. The mocking of a film like this might have less to do with quality and more to do with audiences who are too scared to confront the role their own consumption plays in the machine Showgirls satirically depicts. Perhaps the most telling thing about Showgirls is its use of David Bowie’s song “I’m Afraid of America.” I don’t know if I should be afraid of Verhoeven’s portrait of America or if I should laugh at it, and I don’t think he does either.

Anything for Jackson Gives the Satanic Business a Refreshingly Normal Touch