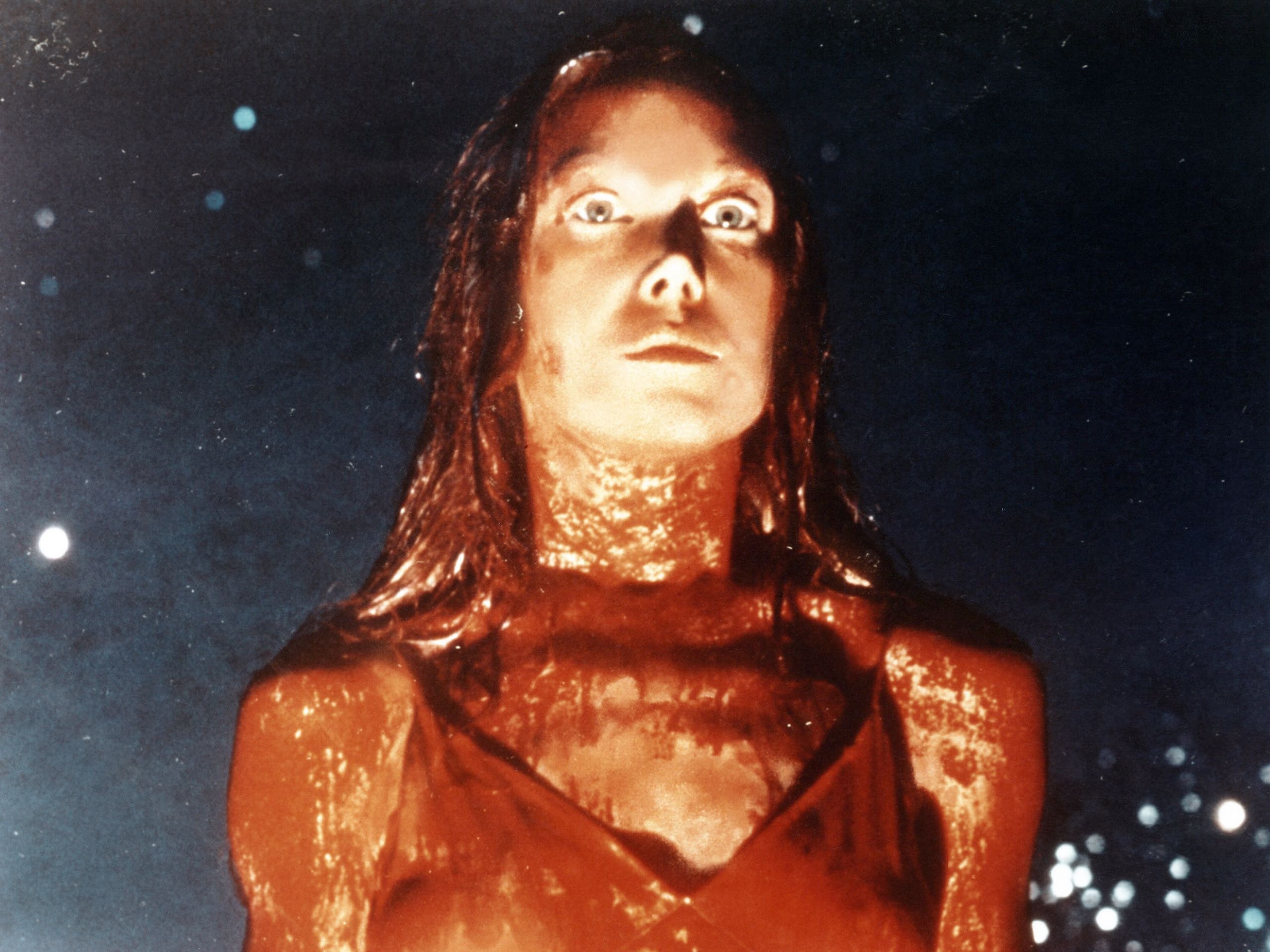 Okay, we know what you’re going to say.

“Are you really kicking off your list of iconic feminists in horror with a movie designed to express the fears men had about women coming into power thanks to feminism in the ’70s?”

Directed by Brian De Palma in 1976, and based on the 1973 book by Stephen King, Carrie is about a young woman who discovers she has psychic powers not long after getting her first period while showering at school. Carrie (Sissy Spacek) is painfully naive and massively unprepared for this next step in her life, thanks to the strict rules and fanatical Christian dogma her mother, Margaret (Piper Laurie), has raised her in. As the story progresses—and Carrie’s power grows—she increasingly becomes the target of the school’s main bully, Chris Hargensen (Nancy Allen), and is victimized by them a final time at the school’s prom. There, she has a bucket of pig’s blood dumped on her head, and she retaliates by locking her peers in the gymnasium and burning it to the ground, killing everyone within. The film ends with Carrie’s mother stabbing her, Carrie crucifying Margaret, and then setting the house ablaze with them inside it.

According to King in his book Danse Macabre, first published in 1981, he wrote Carrie with fears of feminism and equality in mind. According to King, the novel was intended to be about, “what men fear about women and women’s sexuality. Writing the book in 1973 and only three years out of college, I was fully aware of what Women’s Liberation implied for me and others of my sex. The book is, in its more adult implications, an uneasy masculine shrinking from a future of female equality.” For some, Carrie is an inherently misogynistic novel in part because of King’s inspirations for the book, but also because of Carrie’s death at the end of the work.

Carrie, like plenty of women in horror before her, is emblematic of a fairly common trope: the female body as monstrous. Along with Carrie, movies like Ginger Snaps, Teeth, and Jennifer’s Body highlight the anxieties that plenty of cis women have concerning their changing bodies and newfound sexuality, as well as highlighting the fears men have about women coming into their power. So her death, while not celebrated, is depicted as being justified for her monstrous actions, even though she’s been victimized all story long. It also doesn’t help that her mother spends the better part of the narrative suggesting she’s the embodiment of sin, or that the film ends with us seeing graffiti which reads “Carrie White burns in Hell.”

Despite her frustrating ending, Carrie’s story is ultimately a feminist one. It follows the journey of a young girl trying to understand her body, herself, and her place in the world. Despite being indoctrinated into her mother’s fanatical beliefs at a young age, Carrie still pushes to understand the world on her terms. While Margaret turns to religion—namely the Christian depiction of Satan—to explain Carrie’s curse, she instead turns to science and anecdotal evidence to find comfort in her newly acquired gifts. Although Chris perpetually torments her and leads the school bullies to belittle her, Carrie still moves through the bulk of DePalma’s film without cynicism. Towards the end of the film, she’s asked to the prom by her crush, Tommy Ross (William Katt), and it’s her teachers, Miss Collins (Betty Buckley) who distrusts his intentions with her (which, as it turns out, were innocent). It’s only when Carrie is pushed to her limits—her mother confronts her and calls her evil, the bullies dump pig’s blood on her, the school laughs at her like her mother had predicted earlier—that she unleashes death and destruction on those around her.

While DePalma and King‘s intentions may have been to frighten us with this teenage girl in the film’s climax, it almost comes across as sympathetic. While we certainly won’t condone her final actions—especially in light of the real-world violence we’ve seen perpetrated in schools across the globe—there’s sadness and regret felt through her destruction of everything she once held dear, her dreams, and eventually herself.

Although Carrie is a film that can be a source of contention for many horror fans, we at Tilt feel it’s an exemplary piece that shows just how powerful a young woman can be. And, let’s face it, there’s something inherently interesting and timeless about a grown man’s biggest fear being a young woman coming into her power.

Be sure to check back for the next instalment in our Greatest Feminist Icons in Horror series, coming to Tilt all throughout October. For our up-to-date list, click here.