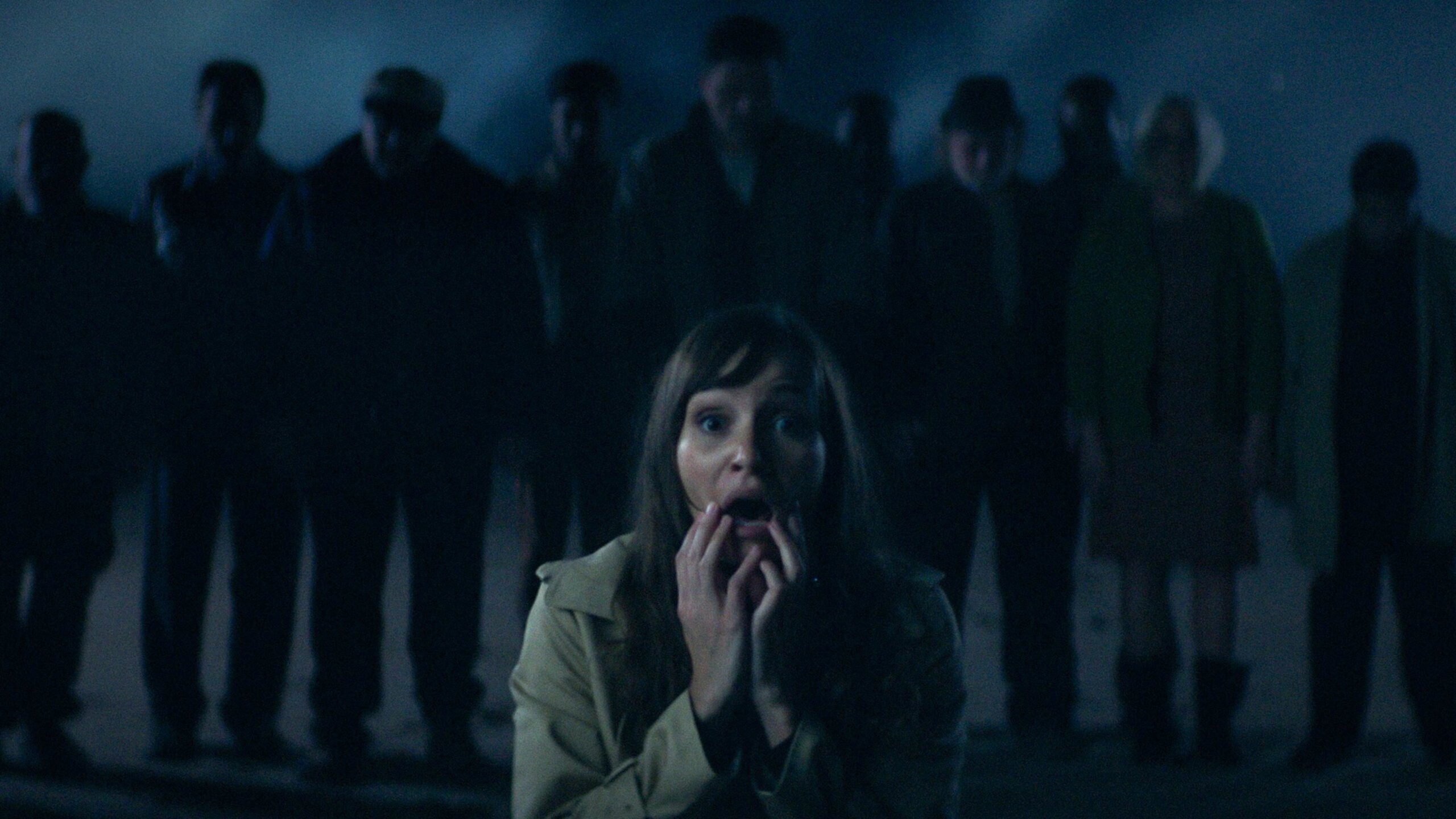 Mickey Keating’s Offseason continues to see the director evoking style over substance, masking a serviceable horror story with some genuinely good moments of terror and a palpable sense of atmosphere. Though aided by some good performances, there’s very little beneath the surface worth exploring. What is on the surface is bare and stretched thin, disguised as mystery, ultimately pushing the audience away from feeling the same terror as the characters, in exchange for confusion.

The mystery is all that holds Offseason together as Marie (Jocelin Donahue) finds herself summoned to a small island town where her mother’s grave has been vandalized. Her friend George (Joe Swanberg) tags along, ultimately finding themselves succumbing to the island’s strangeness and losing a grip on their sanity. Pick any film about a stranger wandering into a small town and discovering a dark secret and you’ve seen Keating’s latest horror film. Despite some attempts to explore Marie’s relationship with her deceased mother (played deliciously by Melora Walters), Offseason struggles to find the heart of its subject matter and ends up with a mystery that winds up less enrapturing than the atmosphere itself.

The secret ingredient to why Offseason isn’t a bad film is how well it treads in style. It doesn’t do a lot to move the plot forward, but the film’s constant desire to obfuscate what’s happening fits snugly with its obvious gothic horror influences. Wearing quite a bit of the video game Silent Hill’s atmosphere, there’s an undeniable appeal to everything happening on screen simply by its setting and shroud of secrecy. A thick fog covers the entire island, amplified by its heavily wooded locale and small-town buildings. Unfortunately, the movie fails to stick the landing, instead barely treading water until the final act in which it goes-for-broke with some magnificent moments that feel like they came before the rest of the screenplay.

One of those great moments involves Richard Brake, who continues to impress as one of the best character actors in horror, playing the ominous Bridge Man that controls the only bridge to the island. He’s tremendous and chews through the best scene of the film. Overall, the performances all range from solid to exceptional, especially Brake and Walters, though Donahue works well for the amount of suspense Keating is trying to put on the audience. Marie is a tough and inquisitive protagonist, slightly terrified of her suspicions about the island and her mother. Donahue imbues the role with a charm that makes Offseason much more palatable to sit through, even if her character does spend a lot of time merely frightened and confused.

It’s a shame that Offseason ends up as average as it does. It’s often an exercise in tedium but fills those long stretches with relatively interesting ideas, even if they’re not particularly original. As a tone piece, Keating delivers an eerie coastal horror film that wants nothing more than to entice viewers with its mystery. When the plot finally kicks into high gear is when the padding of the mystery is slightly forgiven for those genuinely satisfying horror beats. The ending scenes are fantastic, but outside of being visually compelling, they hardly justify the means.

SXSW 2021: Islands is a Quiet Gem about The Need for Human Connection

Clerk Goes Back Bown a Familiar Road with Kevin Smith