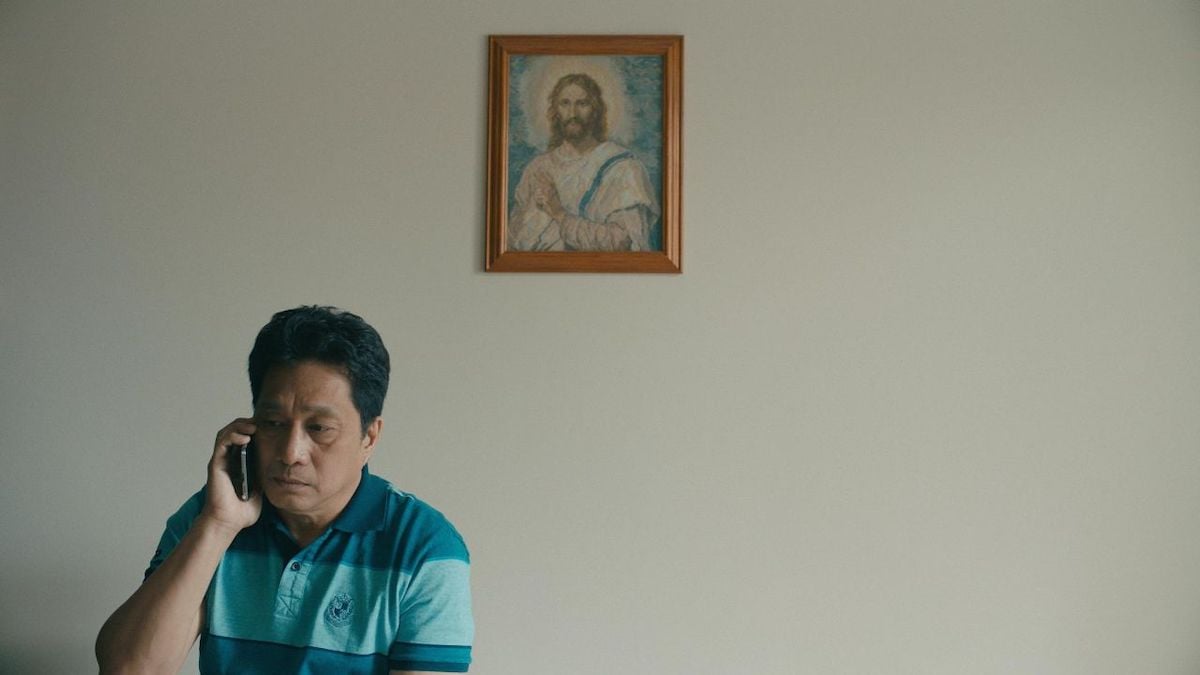 Joshua (Rogelio Balagtas) is not the kind of protagonist you often see in the movies. A middle-aged Filipino immigrant to Canada, he is a shy and withdrawn man. When he is asked by his janitor colleagues for lunch, he politely declines, saying that he has brought his own. But in private, he is a man of quiet faith, pleading with God for a change in his life. It takes a strong director to bring this type of character to life; first-time feature filmmaker Martin Edralin puts his mark on the familial drama with great assurance.

After his mother dies, he quits his job to look after his senile father full-time. Despite this change in circumstances, he sticks to his routines, cooking food in the microwave, having the occasional cigarette, and finishing the night with online pornography. He is excellently acted by Rogelio Balagtas as a man trying to hide the deep yearning behind a closed-off exterior.

But when his Kuwait-based cousin Marisol (Sheila Lotuaco) turns up for his mother’s funeral, he finds the chance to rediscover himself in this quiet gem of a film, a lovely reverie on ex-pat identity, self-actualization, and the bonds of family. Together she teaches him things about himself that he never knew, creating a lovely connection that seems to reverberate across the Filipino diaspora.

Of course, it is assumed that by the end Joshua will change, but it is the quiet way the film earns this change that makes it feel so well-accomplished, not wasting its time on any fake contrivances. Martin Edrali, graduating from short filmmaking, is a person obsessed with tiny gestures, showing how their repetition and accumulation can make points far better than any grand statement. His female cousin could’ve easily descended into rote stereotype too, but she is given her own arc and backstory that only strengthens the film’s themes.

Islands also contains a soft, oddball charm that elevates it above its domestic trappings and depressing-seeming premise. The framing of particular shots is very inspired, all the while allowing us to laugh with and root for Joshua instead of merely laughing at his misery. It envelopes you into its slow drama, creating empathy simply by allowing us to observe.

The Philippines is a country of islands, presumably partly inspiring the film’s name, which probes the nature of a people who live and work all across the world, from cargo ships to North America to the Middle East. Yet no man is an island, the possibility of connection still possible no matter how old or withdrawn you might be. Coming at a time when the world has never felt more separated and out of reach, Island’s gorgeous empathy acts like a soothing and gentle balm for the spirit.

Islands plays in the Narrative Feature section of SXSW, running digitally from 16-20 March.

SXSW 2021: Women is Losers a Well-Acted but Unsubtle Drama