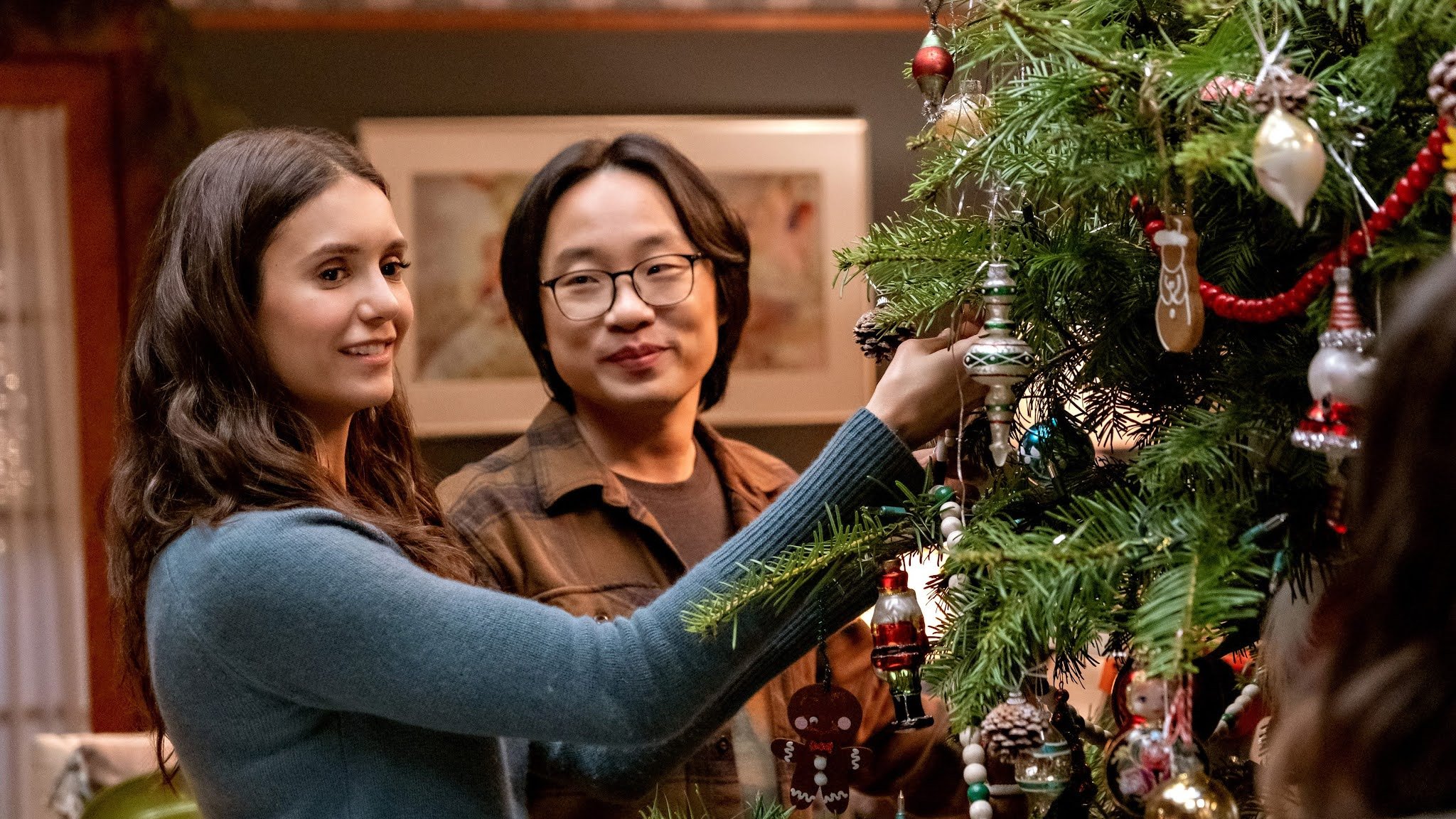 Love Hard has an intriguing premise: Nina Dobrev (The Vampire Diaries) is catfished by Jian-Yang (Jimmy O. Yang) from Silicon Valley, thinking that he looks like a rugged Paxton Yoshida-Hall (Darren Barnet) from Never Have I Ever, which leads her to surprise him by showing up at his door.

She leaves LA and travels to the small town of Lake Placid to spend Christmas with a man based on a “wish you were here to celebrate with me” text. Then she is hit with the shocking truth: The “Josh” she thought she knew is not the aged-up, bearded Paxton; He’s an endearing but completely different-looking Jimmy O. Yang.

Everything comes crashing down for Natalie (Dobrev)… until she sees the Josh she recognizes at a local bar. His real name is Tag, he looks exactly like the pictures on the dating profile she’s been chatting with, and she wants him. The real Josh (Yang), whose family is delighted to discover that he finally has a girlfriend, comes up with a plan: If Natalie stays and pretends to date him in front of his family, in return he will help her “land” Tag (Barnet).

This Netflix romantic comedy has so many of the classic holiday film hallmarks: A supremely wholesome family with hidden corners of tension, a city-girl with a secret about her job back home, small-town traditions like competitive carol-singing and the airport receptionist somehow also being the Uber driver and an old friend of Josh’s.

Love Hard (directed by Hernán Jiménez) is a fun, spirited burst of festivity and feelings. Viewers will have to suspend their belief at several points —There’s no reason a millennial would not have Facetimed someone they met online and talk to all day; At one point Natalie tells the real Josh that his best photographable qualities are his eyes and “really straight teeth”, while she’s looking right at his wildly attractive dimples!— but there are some refreshing additions to the typical trope-filled Christmas ridiculousness:

Comedic beats can be found in Josh’s competitive relationship with his arrogant, attention-seeking brother (played by Harry Shum Jr.), his firecracker of a grandma who says the most inappropriate things at inconvenient times, and a chaotic series of accidents as the couple stumble through lying to everyone else. Where the film shines is that every joke, every fail, every dive deeper into pandemonium, brings Josh and Natalie closer together in the most genuine, natural ways.

The fake-dating aspect of their relationship brings more trouble than tenderness, but the friendship they build along the way is where the magic lies: When Josh shows how well he knows Natalie from their conversations on the phone; Natalie encouraging Josh to stand up for himself against his brother, and to follow his true passions; Even the circumstances where they have to work together to make Natalie seem like Tag’s ideal woman.

The interactions between Natalie and Josh are incandescent; the spark between them as warm and sweet as a scented candle –which, coincidentally, is Josh’s dream business venture. I was, admittedly, unsure as to whether I could be convinced of Yang as a legitimate love interest in a movie so focused on romance. But his performance is unwaveringly wholesome, charming, and sincere –despite the strong impression that religiously watching six years of Silicon Valley has had on me.

Where Josh is an interesting, compelling character, Natalie lacks nuance, and ultimately, appeal. Her primary characteristic seems to be a desperation to find love. She’s had a series of dates so disastrous that she’s made a career writing about them, but is also way more naïve than a woman who has been on (and burned by) that many app-matched dates would be. Fortunately, Yang is so striking a lead that Natalie’s one-dimensionality is often overshadowed by the audience’s inclination root for his happiness.

Though Natalie welcomes the enthusiasm for Christmas that Josh’s family expresses, she is decidedly outspoken about the fact that there are a lot of problematic motifs surrounding the holiday: She mentions the “creepy” implications of Santa seeing you when you’re sleeping; says that Love Actually is “a movie about people falling in love based on how they look” (which is ironic because she does the same thing with Tag in this film), and repeatedly calls out classic Christmas tune ‘Baby, It’s Cold Outside’ for being “the sexual assault theme song.”

The moments where Josh responds to Natalie’s instincts on these topics are the heart of the film; This is where we see the kind of guy he is. Their carol-singing rendition of ‘Baby It’s Cold Outside’ where he changes the lyrics to be less “rapey” are guaranteed to put a smile on your face, and will have hearts swooning globally. It’s the kind of scene that will change the audience’s view of a song forever.

The success of Josh as a romance hero is hopefully an indication of where Netflix is going with their male leads in future. With Love Hard, it’s the gentle, low-key, kind-hearted, supportive guy’s time to shine. And yes, he lied at the start, but it’s arguable that Natalie is the character least deserving of redemption in this story. When Natalie apologizes for her actions, it feels shallow; Josh learns his lesson, acknowledges his mistake, and becomes a better person because of it.

Only when Josh realizes that he’s a total catch when he’s being fully himself —in addition to some strategic ‘Maybe don’t post a picture of yourself holding an axe even if you think it makes you look manly’ advice from Natalie— do the two find their way back to each other and realize their feelings.

Twitter users have done the math on the title, realizing that it’s a combination of the main characters’ favourite Christmas movies: Love Actually and Die Hard. With the slow burn romance finally blossoming between Josh and Natalie at the end of the film, and Netflix’s tendency to create sequels of their Christmas cinematic universes, it’s easy to imagine that next year will bring us a further look at the couple’s relationship future, likely titled Love Hard 2.