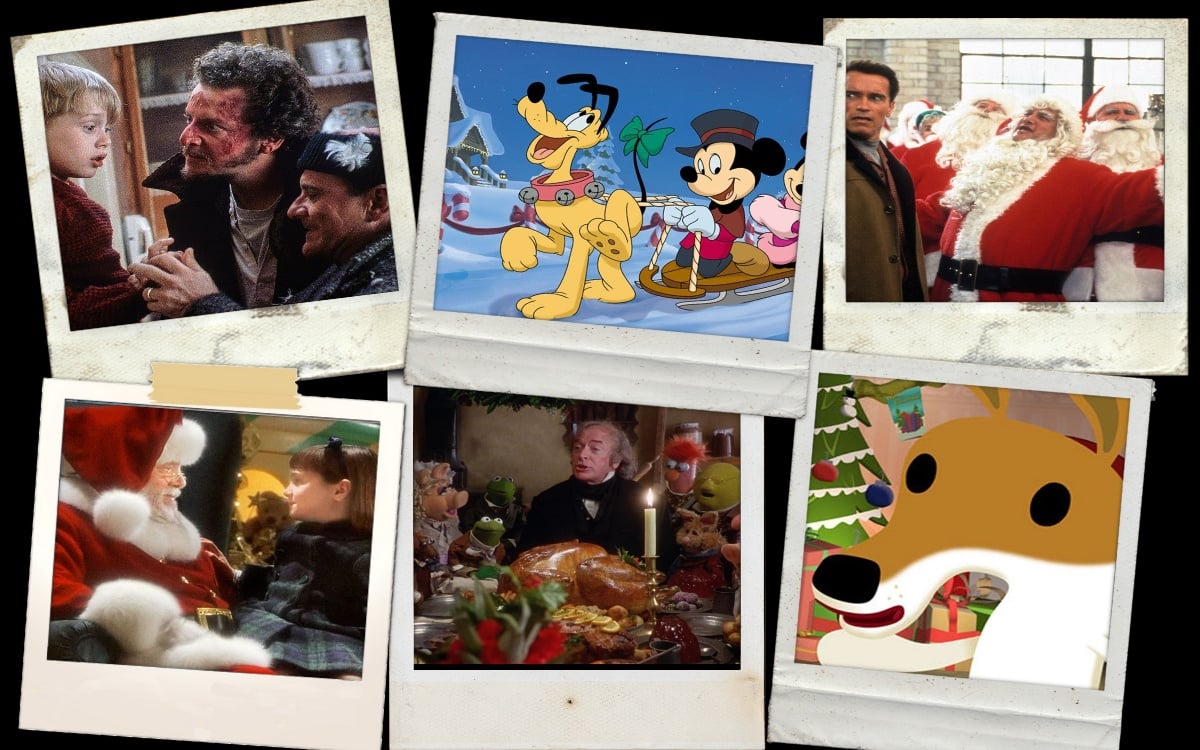 If there’s one thing 2021 has taught all of us it’s that sometimes it’s nice to take a minute to look back on happier times. This isn’t to say that the future is all doom and gloom, but sometimes it can be nice to take a moment to reflect on the things that used to bring us child-like joy. Like the ’90s, for instance. Not only is ’90s fashion suddenly cool again, but plenty of classics from the decade are being rebooted/remade/revived for 2021 audiences.

So if you’re looking for a fun Christmas movie to watch this year, and could use a heavy dose of nostalgia, look no further.

Jake (Jonathan Taylor Thomas) has made a point of staying as far away from home as possible during the holidays. And this year was no exception… until his dad offers to give him his vintage Porsche if he makes it home by 6:00 p.m. on Christmas Eve. Cue the misadventure-filled race home! This movie has everything you’d want from a ’90s rom-com family movie: a college nemesis, a girlfriend he needs to win back (played by Jessica Biel, no less), and Jonathan Taylor Thomas. What more could you ask for?

In what has to be one of the most convoluted stories ever told, Miracle on 34th Street (a remake of the 1947 film of the same name) follows the journey of a department-store Santa who is arrested and put on trial. To get Kris Kringle (Richard Attenborough) acquitted—he’s been set up by a rival Santa in collaboration with other department stores who are envious at the business he’s bringing in—attorney Brian Bedford (Dylan McDermott) has to prove the existence of Santa Claus. No, we’re not kidding. The movie was a lot, but it’s a ’90s staple and even stars Matilda‘s own Mara Wilson.

Not only did this movie familiarize everyone born in the ’90s with Tim Burton’s aesthetic (even though the film is directed by Henry Selick) and give Hot Topic merchandise designs for years to come, but it forced audiences to ask an unanswerable question: Is this a Christmas or Halloween movie? Although we can’t put an end to that argument—it’s Christmas, it’s clearly Christmas—we can tell you that it’s a great ’90s film to watch in December either way. The movie follows the story of Jack Skellington (Chris Sarandon) who, tired of being responsible for Halloween, has Santa Claus kidnapped and takes his place. As expected, things do not go well.

This adorable short film follows the tenacious Olive (Drew Barrymore) as she makes her way to the North Pole after it’s revealed that Santa might have to cancel Christmas when one of his reindeer becomes injured. Although he tells the reporter that he might still be able to fly if “all of the other reindeer” can pull his sleigh, this holiday-loving dog is convinced Santa said “Olive” and needs her help. Along the way she makes enemies with the Postman (Dan Castellaneta) who’s tired of delivering Christmas letters, as well as Martini (Joe Pantoliano) a con artist penguin. It’s an adorable tale that teaches us anything is possible when you try hard enough and that dogs work as well as reindeer when you’re in a pinch.

Although this flick never made it to theatres, it’s easily one of the best Disney Christmas movies out there. The film is cut into several distinct segments. In “Donald Duck: Stuck On Christmas,” Huey, Dewey, and Louie (all three voiced by Russi Taylor) find themselves in a time loop when they mess with their family’s Christmas plans. In “A Very Goofy Christmas” Max (Shaun Fleming) finds out that Santa isn’t real thanks to his mean-spirited neighbour, but then he and Goofy (Bill Farmer) get an incredible surprise when the real Santa shows up. And then in “Mickey and Minnie’s Gift of the Magi,” Mickey (Wayne Allwine) wants to get Minnie (Russi Talyor) a chain for her watch for Christmas, so he sells his prized harmonica. Minnie wants to get Mickey a case for his instrument, so she sells her watch to buy the case. It’s a sad, but tender, segment that drives home the fact that it’s not the gift, but the thought, that counts.

While most of us are familiar with Charles Dickens’ A Christmas Carol—in which a greedy boss is visited by the ghosts of Christmas past, present, and future, and is taught to be a better man by the end of the three spectral visits—the Muppet version of this classic is arguably a million times better. Not only does it feature Michael Caine as Scrooge, but it includes some wonderfully catchy musical numbers, like “Marley and Marley” performed by Statler (Jerry Nelson) and Waldorf (Dave Goelz), and the famously lost song “When Love Is Gone” sung by Belle (Meredith Braun).

If there’s one actor who’s quintessential ’90s, it has to be Tim Allen. Not only did he define the decade by playing Tim “The Toolman” Taylor on Home Improvement, but he’s arguably one of the most iconic versions of Santa Claus to grace the silver screen. In The Santa Clause, Allen plays Scott Calvin, a toy salesman who wants his son, Charlie (Eric Lloyd), to keep believing in Santa even though Charlie’s mother and step-father think it’s time for him to find out Santa isn’t real. Unfortunately, it turns out that not only is the man in red real but when Scott accidentally kills him (he startles him and Santa falls off the roof) he inadvertently becomes the new Claus. The movie was so popular that it evolved into a three-film series (although maybe skip the last one if you decide to watch them since it’s an absolute disaster).

If you haven’t seen Home Alone then your family might love you about as much as the McCallisters love Kevin (Macaulay Culkin). When the McCallister family is late for their flight to Paris, France, for Christmas, they accidentally forget Kevin in the attic (where he’s been sent to sleep as punishment for ruining the family dinner). At first, Kevin thinks his missing family is a Christmas miracle, but when Harry (Joe Pesci) and Marv (Daniel Stern), two burglars who posed as cops to case the house, try to break in, it’s up to him to set a bunch of death traps to try and stop them.

Although Jingle All the Way can be a polarizing film to viewers—with some saying it’s their favourite of the holiday movies, and others shouting their hatred of it from the rooftops—we at Tilt would argue that it encompasses everything a ’90s Christmas movie should stand for. Arnold Schwarzenegger as the lead? Check. Sinbad in a prominent role? Check. An antagonistic neighbour trying to steal someone’s wife? Check. Over-the-top acting and an outlandish story? Check and check. This movie is absolutely nuts in the best of ways. When Howard (Arnold Schwarzenegger) forgets to pick up a Turbo-Man doll for his son for Christmas, he has to make a mad dash through the city to find one on Christmas Eve. Which, given it’s the most popular toy that year, is an impossible task. The story quickly devolves into madness as he goes head-to-head with Myron (Sinbad) for a chance to get a doll, helps bust a ring of Santas selling counterfeit toys, causes an explosion in a radio station, and flies around the city with a jetpack while dressed as Turbo-Man. It’s hilarious, convoluted, and so much more than you could hope for from a Christmas movie.

Share
Tweet
Reddit
Share
Email
WhatsApp
Pin
More
10 Shares
In this article:'90s, '90s movies, 25 Days of Christmas, christmas, Christmas Movies, Holiday Movies, Home Alone, I'll Be Home For Christmas, Jingle All the Way, Micke's Once Upon a Christmas, Miracle on 34th Street, Olive the Other Reindeer, The Muppet Christmas Carol, The Nightmare Before Christmas, The Santa Clause
Up Next: