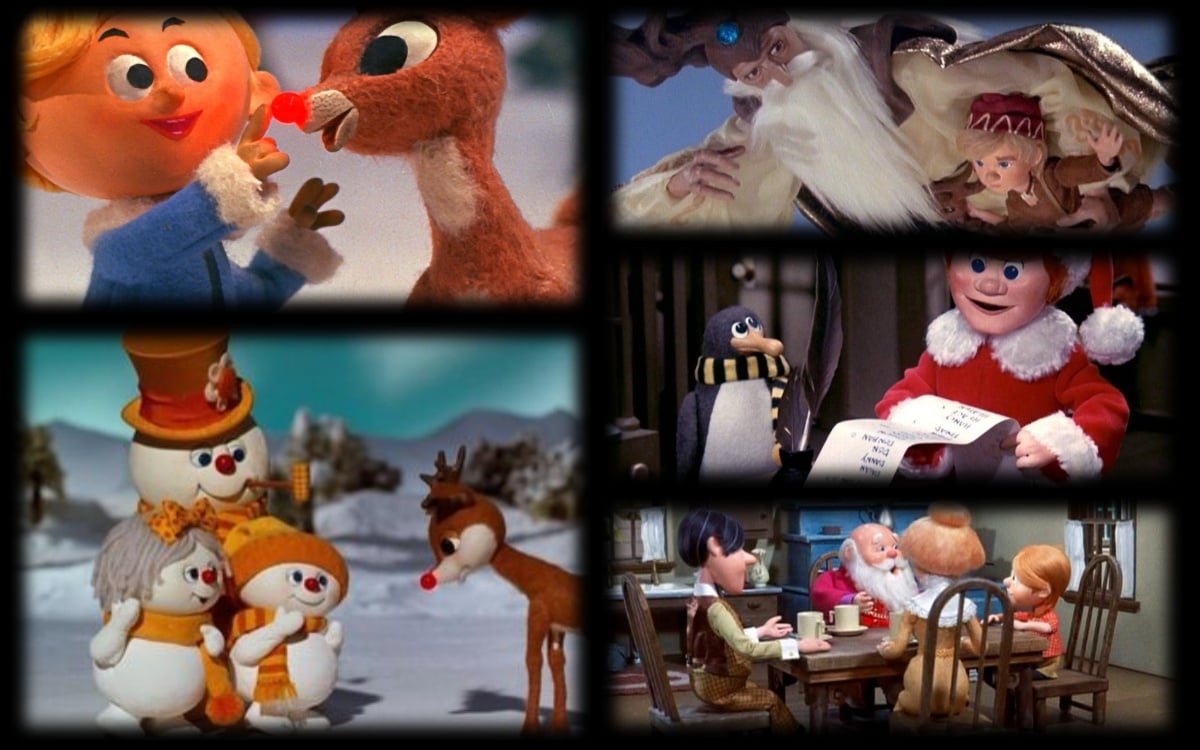 Nothing says December quite like stop motion movies. They’re impossible to escape and feature some of the wildest plot lines, cooky characters, and convoluted concepts known to film. It’s hard to imagine what the writers were thinking when they penned them, or why the studios greenlit some of the more terrifying ideas, but we at Tilt are honestly delighted they did. If you’ve never seen these holiday stop motions, then you’re in for a treat. If you have, then we’re sorry for the nightmarish flashbacks you’re about to have.

The ’80s were famous for a lot of things including, it would seem, stop-motion films meant to give you nightmares well into your thirties. If you’ve ever seen The Life and Adventures of Santa Claus, then we’re sorry. If you haven’t, well, we’re also sorry for introducing you to this garbage-fire of a masterpiece. The movie follows the, well, life and adventures of a man named Claus (Earl Hammond) who was raised in a mystical Forest by a lioness, and who is brought to the mortal world to make it better. He starts delivering toys to children, but in doing so he angers evil monsters named Awgwas, and Claus spends the movie trying to get the children gifts while defeating the creatures. At the end of the movie, a council of mythic beings grants him immortality so he can be Santa Claus forever. It’s, uh, it’s a ride.

One thing to remember when it comes to these older stop-motion films is that the narratives are absolutely bonkers. Rudolph and Frosty’s Christmas in July is no exception to this rule. The plot is beyond convoluted—Rudolph’s (Billie Mae Richards) nose carries the last of Lady Boreal’s (Nellie Belflower) powers but will go out forever if he does something bad, there’s an evil wizard named Winterbolt (Paul Frees) who wants to stop Santa (Mickey Rooney), there’s a character named Big Ben the Clockwork Whale (Harold Peary), Santa fired a reindeer named Scratcher (Alan Sues) who is now hellbent on destroying Rudolph, and eventually Frosty (Jackie Vernon) and his entire family are murdered—so we’re not going to really go into it. What we will say is that this film should be enjoyed either by children or while under the influence.

Another origin story for Santa Claus, this one takes a more realistic approach to the legend (well, realistic for a stop-motion movie). Claus, an orphaned baby, has been raised on the Mountain of the Whispering Wind by an Elven family led by Tanta Kringle (Joan Gardner), Queen of the Elves. When Kris (Mickey Rooney)—which is what they rename Claus—is older, he decides to bring toys to the children of Sombertown in an attempt to make his family the official toymakers of the king. Unfortunately, the man running Sombertown, Burgermeister Meisterburger (Paul Frees), is a miserable man who’s outlawed toys. With the help of a schoolteacher named Jessica (Robie Lester), Topper the penguin, and the Winter Warlock (Keenan Wynn) who can make reindeers fly, Kris has to outmaneuver the law to bring children their toys. Throughout the movie we see him use chimneys to sneak into houses undetected, hide gifts in stockings so the police won’t find them, and he even grows a beard to disguise himself. Eventually, he and Jessica, along with Topper and the reindeer, move to the North Pole where he fully embraces his identity as Santa Claus.

We want the record to show that this movie was almost, almost, the top spot on this list. It’s an amazing movie full of heart, adventure, ingenuity, and deserves way more recognition than it gets. The Year Without a Santa Claus follows the story of Mrs. Claus (Shirley Booth) trying to save Christmas when Santa (Mickey Rooney) comes down with a terrible cold and decides to take the year off after he’s convinced by his doctor that people don’t believe in him anymore. Determined to save the holiday, Mrs. Claus sends two elves to bring evidence home to the North Pole that Santa is still believed in, but they’re accidentally shot out of the sky during a fight between Snow Miser (Dick Shawn) and Heat Miser (George S. Irving). Like all of these stop-motion fever dreams, the plot of this film quickly devolves from here. Mrs. Claus has to fly down south to try saving a reindeer that’s been imprisoned in a dog pound, Mother Nature (Rhoda Mann) has to convince her sons (the Miser Brothers) to help Mrs. Claus, and children around the globe band together to give Santa a present in the hopes that he’ll know he’s loved. As one might expect, Santa is so touched by the gesture that he un-cancels Christmas and delivers toys after all.

A Christmas classic, this movie is a must-watch for most people during the holiday season. Much like the carol that shares the same name, Rudolph the Red-Nosed Reindeer follows the journey of Rudolph (Billie Mae Richards) as he embraces who he is and becomes a member of Santa’s (Stan Francis) sleigh team… and that’s about all the similarities the song and the movie share. Unlike the semi-jovial tune, the movie includes moments like Rudolph’s father, Donner (Paul Kligman), covering the reindeer’s nose with mud because Santa told him his son won’t make the team with a bright red nose. We’re also introduced to a bunch of new characters like Hermey (Paul Soles)—an elf who’s horrible at making toys, that’s been ostracized by his peer because he wants to be a dentist and not a toymaker—and Yukon Cornelius (Larry D. Mann), a prospector looking for silver and gold and finding only a battle (seemingly to the death) with the Abominable Snow Monster, Bumble (William Windom). We’re also introduced to the Island of Misfit Toys, where unusual (sentient!) toys go to hide from the world and live secretly in shame. Honestly, this movie is horrifying when you think about it, but for the sake of nostalgia let’s not dwell.

50 Years Later: A Clockwork Orange and How Sadly Relevant the Movie Continues To Be