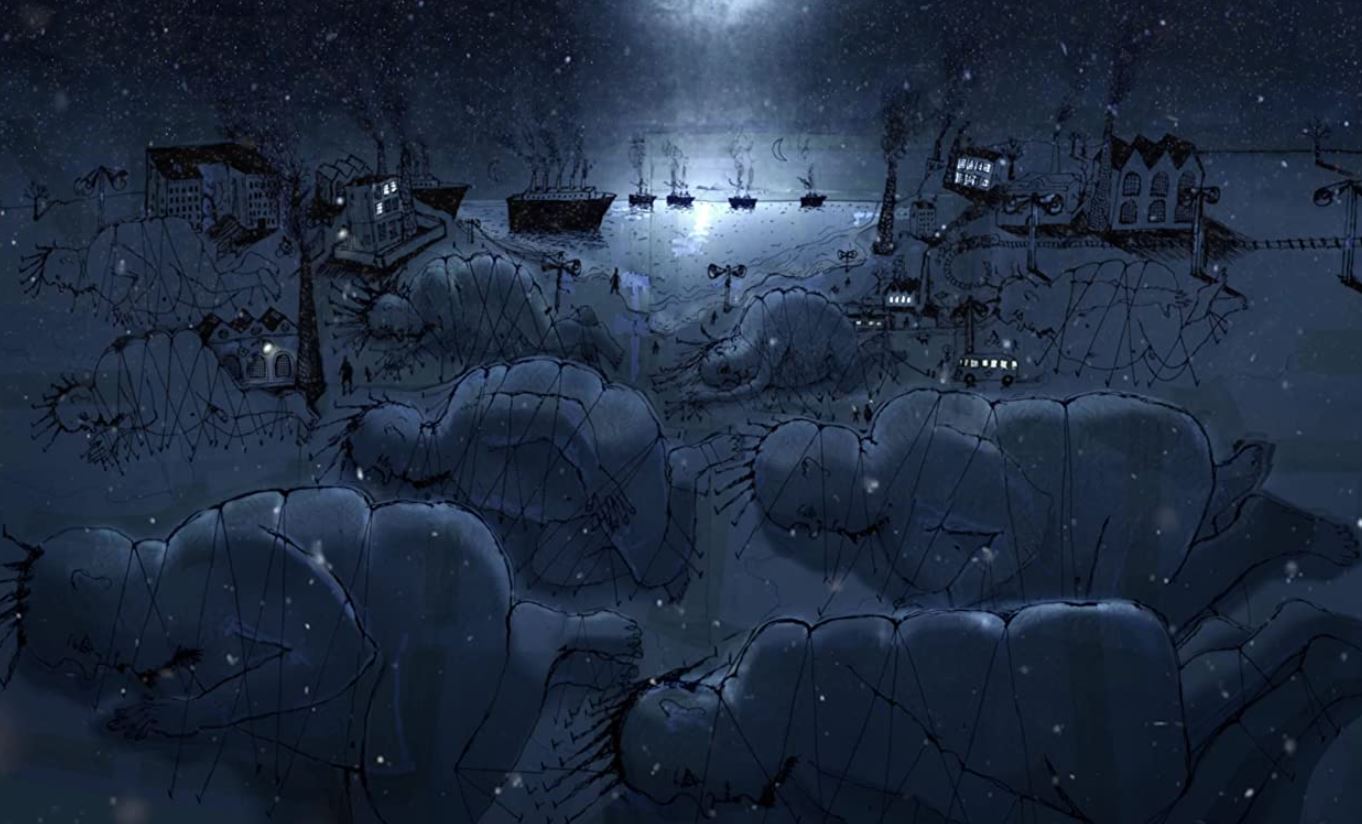 Miserable and beautiful at the same time, Mariusz Wilczyński’s personal Kill It and Leave This Town is an entrancing achievement in animation. Dreamlike in its presentation, Wilczyński cobbles together a collection of his own memories as he delves into the depths of his past to bring back family members and other figures who left a lasting impression. A bittersweet journey through his own childhood, Kill It And Leave This Town is an intense, artistic expression of the importance our past has on us today; and the memories we cling to in hopes of reliving them again.

The city that Wilczyński presents is one visibly industrialized and tattered as chimneys fill the air with huge billows of smoke and every apartment building looks run-down as it presses tightly against the next building. Welcome to Łódź – the city where our director grew up and called home in the 1960s and 70s. Its opening scenes lay out a stark realism with crudely hand-drawn characters cutting the heads off fish at the local fishmonger or the morgue worker cleaning up the latest corpse. These scenes all have a morbidity to them that the animation only accentuates as characters discuss death or navigate through mundane conversation. These moments would be sleep-inducing on paper but animated – on paper – they carry a tone of something surreal and grotesque.

There is something intrinsically calming about Mariusz’s hometown in Poland as people mill about and go through their day-to-day routines. Yet when animated the scenes carry a different feeling as Wilczyński reflects on the way things used to be. Using surreal imagery, the film often confronts the grotesque ways in which people lived, but does so in a way that leaves it detached from reality. A good early example is the fishmonger where the fish are replaced with tiny humans, their body parts for sale around the shop much like a butcher would do to the various parts of animals. These sequences feel like nightmares in how they’re presented, but never feel too real outside of the recognizable setting and tactile presentation that drawing on paper provides.

It isn’t until Kill It And Leave This Town shifts to its second half that things take a much more abstract approach with few moments feeling grounded. This is also where most people’s enjoyment of the film will vary. Gone are the smaller ideas and now here are more sprawling concepts that escape the confines of the city. Łódź ends up the foundation to a journey of reflection. The conversations are still the same, each one introducing another philosophical discussion to be entertained in between the typical mundane exchange of pleasantries and curiosity.

As Mariusz himself ends up being the main character of his own film (though named Mariuszek in the film) it’s structured in a way where he gets to have these conversations and relive these memories but feels more like a day-in-the-life rather than an odyssey through someone’s personal growth. That’s the surface-level appeal as the conversations are humorous and elevated by the flourishes within the animation. Nothing ever feels static in the animation either as every character constantly wiggles around from the consistent irregularities that stem from hand-drawn images. The result is reminiscent of Don Hertzfeldt’s work, but with less straight edges and more emphasis on drawing people like people.

Kill It And Leave This Town is also Mariusz confronting people he always wanted to have conversations with, which even goes so far as to include notable Polish talent providing voices. Legendary Polish director Andrzej Wajda voices one-half of a charming elderly couple in the back half of the film, with his wife voiced by actress Irena Kwiatkowska. These two performances make up a few done by people who have sadly passed away during the making of the film. It leaves an oddly fitting tribute, as the film itself explores personal ghosts and memories in its own somber way. It also highlights the staggering amount of time put into the highly personal project which pays off immensely.

By the end, Kill It And Leave This Town waves goodbye to its journey in one of the more satisfying, hypnotic conclusions to a film. It’s an ending that feels just as fleeting and memorable as the memories that precede it. Capturing a tone and vibe that will likely resonate with those who have experienced grief and regret in their lives, Mariusz Wilczyński makes a daring feature debut with Kill It And Leave This Town that solidifies itself as one of the best animated films in recent memory.