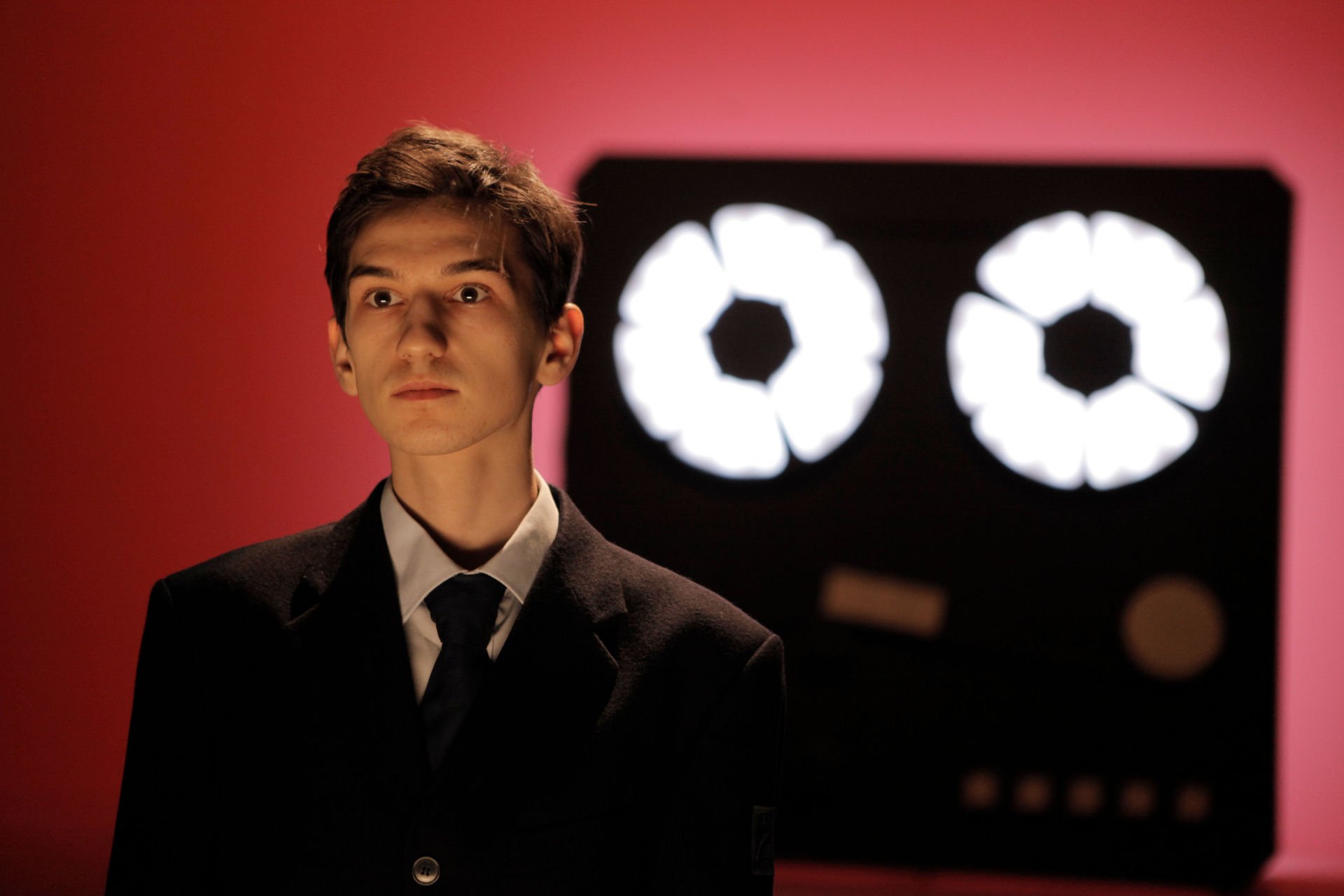 Juxtaposing the reality of the past with how it was perceived by those living it, Uppercase Print is a clinical look at the lengths a government will go to in order to prevent dissent. Using archival footage of propaganda in 1981 Romania, Radu Jude’s documentary brings to light the totalitarian world that few in the country were willing to speak out against. Focused on the seemingly trivial scribbles of a young teenager, Uppercase Print emphasizes the ease with which governments can neutralize opposition – and how important it is to stand with others in the face of tyranny.

Adapted from a play by Gianina Cărbunariu, Jude expands upon a segment of Cărbunariu’s play and places the spotlight on 16-year-old Mugur Călinescu (portrayed by Șerban Lazarovici). Pulling from an extensive file on Călinescu by Romania’s secret service (Securitate), the film stages conversations and thoughts in a television studio with actors on various backdrops. By doing so, Uppercase Print paints a vivid portrait of a boy who has found himself on the wrong end of a Communist regime in his home country.

His trouble begins when phrases start popping up in blue chalk throughout the city of Botoșani. The phrases vary from pleas for freedom to the need for unions and basic requirements like food. As the Securitate learns who is writing these messages of dissent, the film starts evolving into more than just shining a light on the oppressed. Uppercase Print quickly becomes an examination of the life of Mugur Călinescu as he tries to navigate his way through school, avoid the ire of his parents, and try to keep his family outside of his troubles with the law.

The decision to use actors and have them perform as if on stage gives Uppercase Print an artificial feeling that is more effective when conversations are happening versus monologues. The film’s overall structure is effectively one re-enacted scene from the Securitate’s file, which is then juxtaposed against a piece of archival footage pulled from around when the re-enacted scene would have originally taken place. Jude then rinses and repeats this until the story itself feels more important than the message and can eventually support its own ideas. Unfortunately, the less interesting and more artificial scenes feel like they could have been layered on top of archival footage and have a greater effect with less time spent.

Older clips from commercials and news broadcasts accentuate a common narrative with Communist regimes and propaganda machines: things are not necessarily what they seem. A few clips that capture growing tensions in Romania at the time are overshadowed by musical numbers telling girls to look forward to marriage and boys to do their part for their country by going to war. Such messages are not uncommon to see – especially out of this setting – but Uppercare Print feels like it is honing in on something more impactful and that’s the role of radio and media in dissemination of information.

As a teenager, Mugur listens to a lot of music. Interviews with his friends highlight as much. One specific radio station continues to be brought up: Radio Free Europe. However, what it means to be listening to it seems to be different depending on who it is. The young listen to music, while the older generations and parents are concerned about the political messages it is sending their children. Meanwhile, the role of television seems to be a reinforcing of Communist beliefs – an easier medium to govern than radio. Jude’s connections like this help give Uppercase Print just a little bit more importance in the conversation around propaganda and indoctrination.

There is a lot to uncover from Jude’s film, and it benefits from trying to tell a singular story with the government as a character. He makes his point extremely clear early on in the film with smart editing techniques that have the same effectiveness as the archival footage used within. The terrifying truth of Mugur Călinescu’s life after his scrawled protests is a reality check on how opposing political views were an uncommon, life-threatening thing to vocalize. Uppercase Print is at its best when employing the language of film to tell a frightening story of someone left in the annals of history – where he otherwise would remain a footnote. It’s a cautionary tale of what can happen when governments go unchecked that doubles as a call-to-action.

Kill It And Leave This Town is a Personal, Intense Reflection on Memory