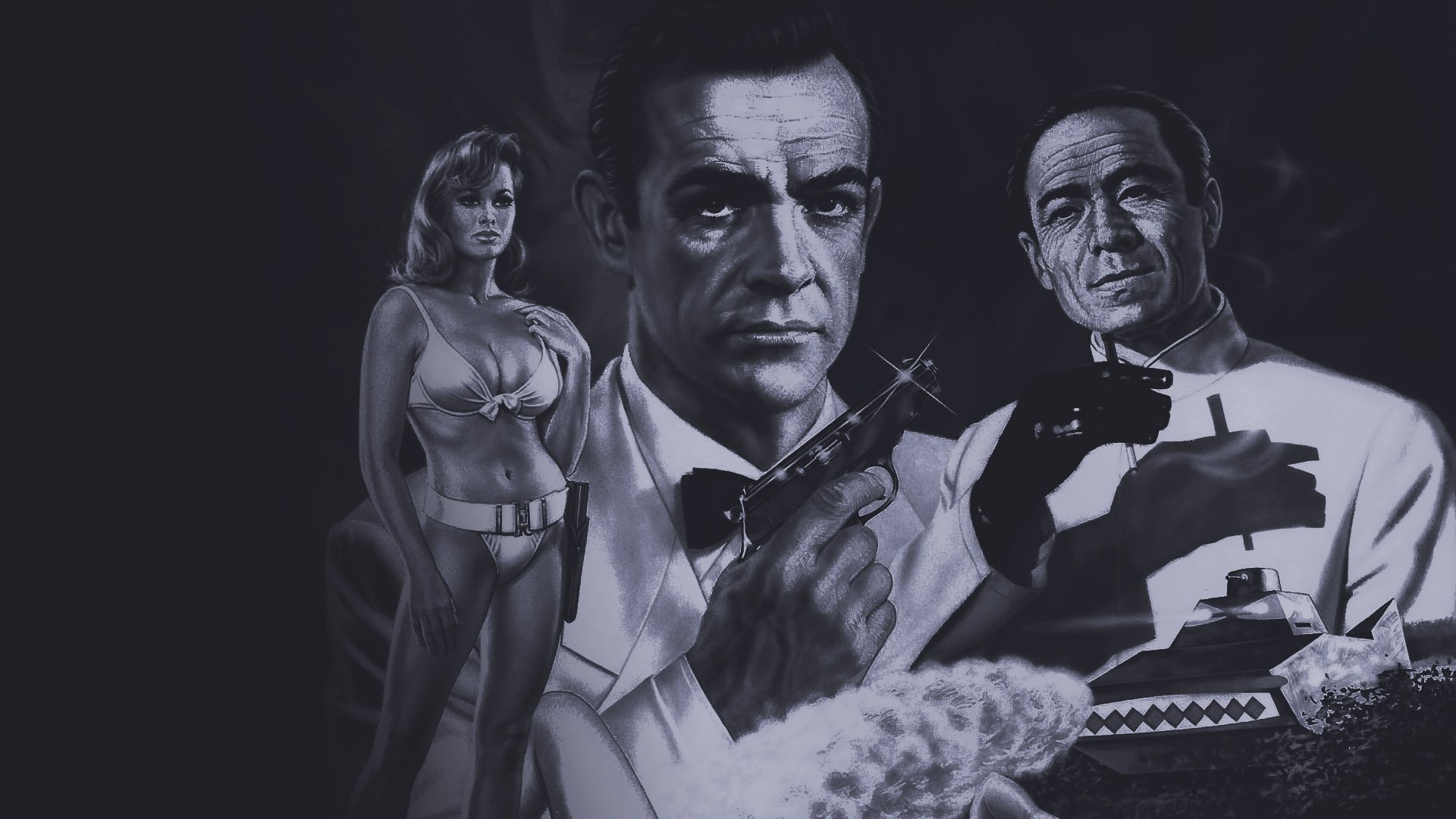 Author, Ian Fleming had been seeking out a movie deal for nearly a decade until the rights for his novels were finally bought by producers Harry Saltzman and Albert R. Broccoli. Dr. No was the first James Bond novel turned into a film, though it was the sixth novel in the book series and was adopted by four writers: Wolf Mankowitz (who went uncredited by request, fearing the film would bomb), Johanna Harwood (the first and only women screenwriter of the franchise), longtime contributor Richard Maibaum and last but not least, Berkeley Mather. Little did they know they would change the landscape of spy-action cinema forever with the release of Dr. No.

Arguably Dr. No is one of the closest cinematic interpretations of any Bond novel in tone and plot. The changes they made were mostly cosmetic save for some minor plot details such as the filmmakers’ decision to eliminate the Cold War elements of the books by making the titular villain a fictional terrorist and the head of an organization called SPECTRE.

Dr. No is fairly stripped down compared to all future entries; a surprisingly modest spy yarn, notable mainly for its cold nature. Bond comes across more like a detective than he does in any other entry. While the film includes a killer tarantula, one underwhelming car chase, and plenty of mayhem and drivel, Dr. No actually features very little action. And for what was supposed to be an action film, Terence Young (who would go on to helm three entries in total) directs with a tongue-in-cheek style, an approach that surprisingly set the groundwork for the future of the franchise.

“World domination. The same old dream. Our asylums are full of people who think they’re Napoleon. Or God”

You would think producers Broccoli and Saltzman were geniuses in their choice to cast Sean Connery, who at the time had only starred in two motion pictures, but in truth, Connery, far from the first choice, was the only actor approached who was willing to sign a five-picture deal. There’s little doubt that Dr. No’s strongest attribute remains Connery’s iconic performance. His act here comes off as a much more laid-back than what we would later see. Despite his suave surface, his Bond is overconfident, impulsive and careless. Connery does a superb job of infusing the character with just the right blend of charisma and menace. Amongst the many cold-blooded murders, the standout sequence sees the hero himself take full advantage of his license to kill. The Bond of Dr. No is flippant and vicious and Connery gives him hints of a chic ruffian; he is a man who takes pleasure in teasing another man right before discharging a dozen or so bullets in his direction. This is a pre-gadget Bond, armed only with his Walther and his cynical, one-liners. Bond’s quips were ahead of its time, as was Connery who set the standard by which all future actors measure themselves against.

Bond: “I would, you know. Only M would have me court-martialed for illegal use of government property.”

When Bond arrives on Crab Key, the lovely Honey Ryder played by Swiss export Ursula Andress is introduced strolling out of the Caribbean ocean in a white bikini, accessorized with a survivalist blade by her side. Her introduction remains one of the most famous scenes in cinema, marking the arrival of the first “Bond Girl”. Not even James Bond himself had such an iconic introduction (although he came close four decades later). Dr. No doesn’t shy away from Fleming’s sexual daringness and the series isn’t known for it’s sophisticated, sexually independent female cast as Bond girls typically represent male fantasies. Honey Ryder is one of the most obvious sexual puns that any Bond girl has been saddled with and while it can be argued that the “damsel in distress” may have been altered by the Bond franchise, Andress, unfortunately, spends all of her screen time in scenes that are borderline sexist.

‘Dr. No’ – Arguably sexist and racist, but no doubt, terrific entertainment

Unfortunately, Dr. No is far from perfect with the biggest problem being the seemingly low-boiling racism present throughout the movie. In the book, for example, Honey is Creole, and her full name is actually Honeychile. In the movie “chile” is dropped and her race is changed, and even worse, Quarrel is written as a stereotype who answers Bond’s every command including fetching his shoes. One of the main themes running through Dr. No (the novel) was the concept of friendship and loyalty. The relationship between Bond and Quarrel is heartfelt and Bond feels genuine remorse and sadness when Quarrel dies. Rather than the very dependable, good friend to 007, here Quarrel (played by John Kitzmiller, the first black person to win the best acting award at the Cannes Film Festival), is reduced to a mere acquaintance and used only for comic relief. If anything, Dr. No gives us an idea of the mindset of the early 60′s and how, what wasn’t so obvious back then, becomes quite clear decades later.

The titular character Dr. No isn’t much of a villain; and apart from his mysterious black gloves and his fancy aquarium, we don’t see nor hear much from the card-carrying member of SPECTRE. Yet somehow Joseph Wiseman turns out an understated performance and a chilling demeanor making Dr. No one of the most iconic of all Bond characters. It’s hard to imagine what the subsequent 007 movies would have looked like without his invention of the Bond villain archetype. The Canadian-born actor appeared in a slew of Broadway productions, television shows, and movies but he will always be remembered most for locking horns with Sean Connery’s agent 007 as a mad scientist with an arsenal of fiendishly wry quips and a deadly atomic-powered radio-beam weapon.

Dr. No: “One million dollars, Mr. Bond. You were wondering what it cost”.

Credit should also be given for the movie’s innovative look. Production designer Ken Adam set the bar high with his memorable set designs including Dr. No’s sleek extravagant quarters and strange space-age lab. What remains most unappreciated about Dr. No is its on-location cinematography. The film features great location work in Jamaica which has the honor of highlighting the first Bond outing. Even on a seemingly modest budget, it perfectly captures the beauty of the exotic locales, and editor Peter Hunt (who would go on to direct On Her Majesty’s Secret Service) does a marvelous job with the sheer pacing of the film.

The schizophrenic title sequence introduces John Barry’s famous James Bond theme, but instead of transitioning into the now traditional pop song (which uses the title as a lyric), random portions of two calypso songs were used instead. This was also, of course, the first of Maurice Binder’s many fantastic title sequences, and while some of the standard conventions are absent (such as the silhouetted nude bodies floating about), we still do get the lines of white dots sliding across the screen before transforming into a gun barrel, through which Bob Simmons fires his gun. From then it’s on to a procession of primary colours and shapes and an Atari-like animated sequence. All in all, this remains one of the most distinctive opening title sequences of the series.

Despite all its wild imagination, Dr. No is far from the best of the series, but it’s still very entertaining – and more importantly, it developed a winning formula. From the “shaken not stirred” vodka martini to the Walther PPK sidearm, and the tuxedoed government agent working the casino, the 007 series is without a doubt, the greatest movie franchise ever produced and we owe it all to the success of Dr. No.

Editor’s Note: This article is part of our James Bond Spotlight.

Warrior at 10: Visceral and Emotionally Epic

Bitch Slap: Prepare to Get Slapped …