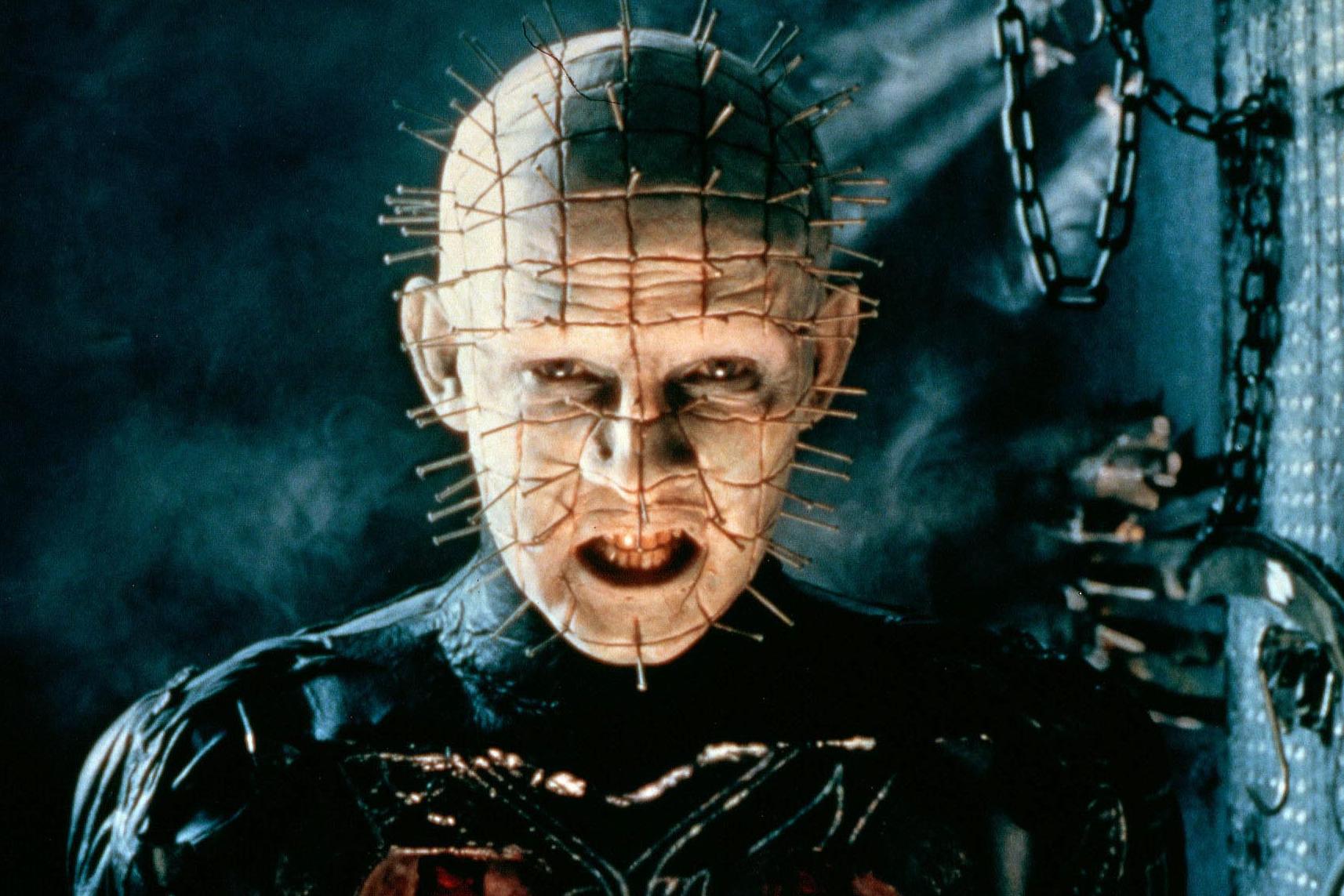 Hellraiser Turns 35 and Jesus Wants his Tears Back

Body horror. Not that a human body is a horrific thing, depending on whom one asks. Rather, we’re referring to the cinematic subgenre that pushes boundaries, forcing viewers to ponder what if the skin, muscles, and bone that make us whole were suddenly altered beyond our control. What gaudy visuals can filmmakers dabble up that remind us of how precious and delicate our physical selves are in this most discomforting of genres? Who are the masters who can get away with such horrific sights because they still find a way to communicate something of value? David Cronenberg is one name that comes to mind, especially his work from the 70s and 80s. The Fly, The Brood, Videodrome, Shivers. Given the regularity and bravura with which the Canadian auteur made these sorts of pictures, it seems remarkable that one iconic movie cut from similar cloth escaped him. Hellraiser.

Now, it is important to give credit where credit is due. Not only is the 1987 unforgettable gore-fest directed by Englishman Clive Barker, but it’s also an adaptation of his own novella, The Hellbound Heart. Moreover, Hellraiser is his directorial debut, which is astonishing when watching the movie and taking in its whirlwind storytelling and puke-inducing special effects. The point here is not to revoke the plaudits Barker so justly deserves. The article will sing his praises, rest assured. Only that the director’s nightmarish visions would have been perfect material for Cronenberg. In fact, notwithstanding certain details, Hellraiser plays a lot like a Cronenberg horror film.

You Opened It. We Came.

Right from the film’s opening minutes, it is made clear that Barker’s magnum opus is keenly invested in exploring the limits of regular flesh-bound stimulation. Well, perhaps less so pleasure than pain given the putrid images of bodily parts hanging by chains in a dark, decrepit room. Anyone who hasn’t seen the film before and wasn’t certain what type of horrors will be on display is immediately provided with a stomach-turning indication. Frank (Sean Chapman), whom the viewers soon learn is a ne’re do well, solves the Cenobite puzzle box and is rewarded with an experience only a seasoned demon can chaperone.

Shortly thereafter his brother Larry (Andre Robinson) and wife Julia (Clara Higgins) move into the same house, unaware of its role as a house of horrors not long ago. Through some admittedly clumsy plotting, Larry suffers an open wound on his hand while helping the movers carry a bed. He walks up into the attic where Julia is, oh dear, reminiscing about her affair with Frank. Larry’s blood drips through the wood board floor and this, somehow, someway, slowly resurrects Franke, gooey piece by gooey piece. All the hedonist requires is more blood from victims to make him whole again before the Cenobites catch up, led by one later baptized Pinhead (Doug Bradley). Julia is more than willing to do his bidding and rekindle their passion.

The story’s puzzle pieces are slotted into each other with extraordinarily melodramatic dream sequences, flashbacks, and bold editing. What could be communicated plainly in a pedestrian if nevertheless efficient manner is given the equivalent of cinematic crack cocaine.  Barker and his two editors, Richard Marden and Tony Randel, present the information as if the audience is experiencing a fever dream. Considering the film’s bonkers subject matter, merely watching it is akin to experiencing a fever dream, so the editing technique is à propos. Barker has been very open about how he lacked filmmaking knowledge while working on Hellraiser. Innate genius? Beginner’s luck? You decide.

The editing style is nothing like what’s used in Cronenberg’s films. The article’s thesis wasn’t that everything about this 1987 classic felt Cronenbergian, only that some key elements did.

We Have Such Sights to Show You

Anyone who claims that no horror movies of the era displayed sights as chillingly gory as Barker’s debut should revisit his Canadian counterpart’s body of work of the same decade. It is fair to say that Hellraiser has more disgustingly realized visuals. Every few minutes or so Barker and his lead effects man Bob Keen have “such sights to show” the viewer. By contrast, Cronenberg develops his storylines with a sense of reality for as long as he can until it’s time to pull something hellish or spellbinding out of his proverbial hat.

Nevertheless, both are driven by a deep interest in the human body. The pros and cons of having skin that responds to tactility, the ungodly transformations they go through when under the guise of malevolent forces mostly beyond human comprehension. What humans physically feel and how they feel it is a key component of each director’s oeuvre. They are filmmakers who explore what could be described as “transformative horror” since the humans in their pictures experience bodily transformations no sane person would ever want to partake in.

The otherworldly effects that bring Frank back to life, figuratively for the movie and literally within the story, at first harken back to John Carpenter’s The Thing. Yet as the transformation of the mass of gristle takes humanoid form, The Fly is what comes to mind. A person, or what was (is?) a person undergoes inexplicable, slow physical horror.

Where Barker and Cronenberg are equally effective at getting under the viewer’s skin is with the interjection of sexuality and the unspeakable horrors their films attach to it. This isn’t Friday the 13th material where two people have sex before being reduced to mincemeat by a serial killer. This is our collective fascination with and need for the pleasure of sex being tethered to either harrowing pain or new bodily discoveries one would think up while on an acid trip.

If the nausea-inducing practical effects remind people of The Fly, then the underlying theme of pleasure associated with sex and pain has a direct connection to Videodrome. In that film, James Wood’s protagonist (he’s no hero) falls down the proverbial rabbit hole of snuff cinema on a mysterious cable channel. As it turns out, the frequencies used to air the movies are causing his character to experience a new reality and, by extension, a “new flesh.” With so much sexual stimulation associated with it, resistance is futile.

Hellraiser’s exploration of perverted sexuality has no commentary to make about the media or its messages, but make no mistake, Barker and Cronenberg do come across as kindred spirits. The Cenobites seemingly cannot distinguish pleasure from pain, so their promises of wonderment come at a dire cost for a soft, fleshy person. Julia helps Frank return from wherever the heck he was because of their passionate love affair. The flashbacks don’t present a loving couple. They showcase two people who got steamy and couldn’t get enough. Because Frank’s rebirth from goop to human requires more blood than a single body can provide, Julia opts to get random strangers into their home with lecherous promises.

Put a Pinhead in It

This article doesn’t aim to make any staunch Cronenbergers or Barkerbites cry foul and demand to know how dare the two be compared because one is so vastly superior to the other or what have you. If anyone reading this genuinely thinks one or the other is a much better director and shouldn’t get dragged down by being mentioned in the same sentence as the other hack, fair enough. Regardless, revisiting Hellraiser recently for this very project only further cemented the idea that it takes inspiration from Cronenberg’s earlier work. Gloriously, it should be added. Barker…hits the nail on the head.

To make matters even more interesting, the Canuck would direct Dead Ringers one year later, a movie about twin surgeon brothers who fall for the same woman. Sibling relations, disgusting operating tools, awkward sexual tension. To cap it off, Barker would cast his fellow horror movie contemporary in 1990’s Nightbreed.

Sidney is an Outstanding, if Conventional Look at the Life of Sidney Poitier