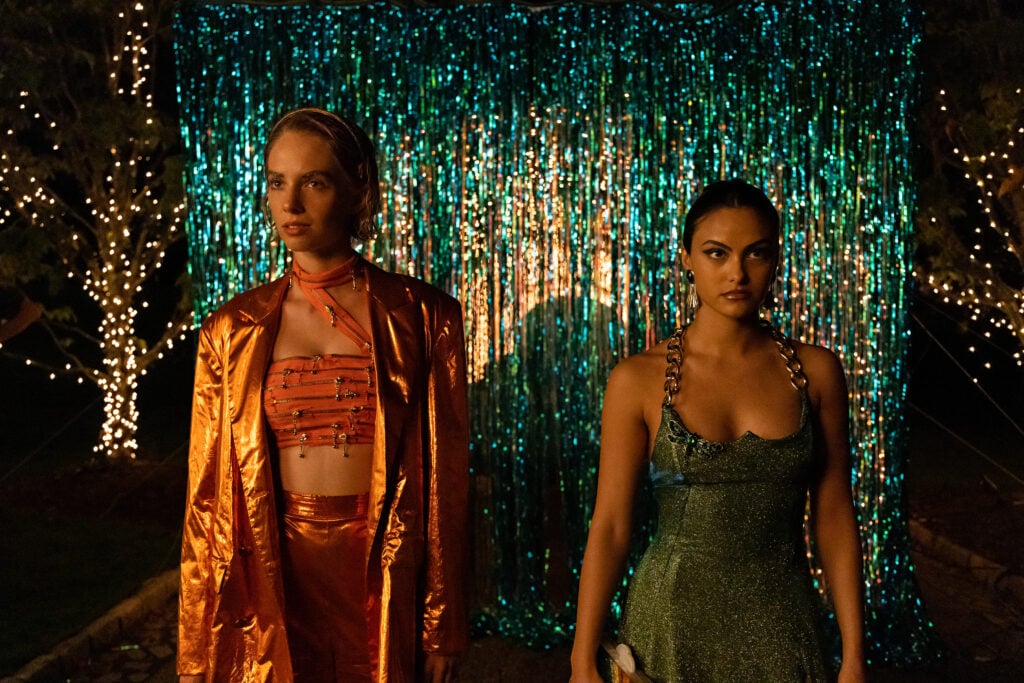 Netflix’s latest teen comedy, Do Revenge, casts a net further than its adolescent demographic by updating tried and true tropes that make the genre so great. You don’t have to be a teenager to enjoy it, anyone with an appreciation of contemporary film history will find the revolving door of homages a cinematic delight.

Note: This review contains spoilers for Do Revenge.

Clueless, Mean Girls, Jawbreaker, Easy A, and of course, Heathers are all classic teen movies from which Do Revenge draws heavy inspiration.

The fashions, soundtrack, and the presence of the privileged class have a Clueless vibe, there’s the sex-shaming and ostracization that Olive endured in Easy A, and the infiltrating of the popular crowd that kicked off the story in Mean Girls. The darkness of the plot and the lengths these teenagers go to destroy each other evokes the twisted premise of both Heathers and its candy-coated progeny, Jawbreaker.

Gabbi: Want a tour?
Eleanor: I mean, as a disciple of the ’90s teen movie, I would be offended if I didn’t get one.

A tour of a new school, which consists solely of the stereotyped cliques found on campus, is a textbook device of the teen movie genre. It’s used time and time again to introduce the new student as well as the audience to the distinct environment in which the story is to take place.

An advantage of using this well-worn gimmick is that it can be updated to the times. Instead of stoners hanging out on the grassy knoll, there’s the “Greta Thunberg brigade” doing performative protesting. Rather than a conservative Christian cult, I mean, clique, like the one Amanda Bynes leads in Easy A, there are the “Instagram witches,” which is essentially the yassification of the coven from The Craft. In place of The Plastics, there’s Rosehill’s royal court, “the cream of the incredibly entitled crop.”

And like any teen movie worth its weight in the genre, there’s a makeover scene. Do Revenge, however, cleverly acknowledges the cliche. “It’s so problematic,” Eleanor points out. “It is!” Drea agrees, squealing excitedly. “But it’s fun!”

Camila Mendes and Maya Hawke have phenomenal chemistry for all stages of the Drea/Eleanor relationship with the extremes being the most compelling. From the genuine friendship moments to the shift of who has the vindictive upper hand in the revenge wars, Drea (Mendes) and Eleanor (Hawke) captivate.

It’s an interesting dynamic between opposites coming together, then turning on each other, and finally teaming up to fight a more malicious evil which brings the girls full circle. They literally drive off into the sunset as besties, singing along to the very apropos ’97 anthem “Bitch” by Meredith Brooks.

However, not all relationships work this well in the film. The popular guy that has the entire student body in a chokehold is completely insufferable. Austin Abrams as it-dude (or it-douche, more fittingly), Max Broussard, has only privilege and manipulation to thank for his coveted status. He’s supposed to be slimy and awful, but if he had some sort of charm to off-balance that, it could’ve given the villain of the story much more complexity.

Abrams succeeds in making Max the bad guy. So much so, that when Drea says that her next plan is to kill him, it’s disappointing to learn that she’s only joking. That is the point of the film where it could go much darker like Heathers or Jawbreaker. And while I would be interested in seeing it go that direction, the way Do Revenge handles it, fits the film and its message quite nicely.

A good teen movie will highlight the absurdity of high school through its storytelling. A great one does so with quotable lines that are timeless enough for future generations. Do Revenge gets an “easy A” in this department.

From “Peaking in high school is cringe anyway” to the poignant “Sometimes it just hurts to exist,” Do Revenge is doing the most with its script. Equating teenage girls with psychopaths or “wounded soldiers on the battlefield of adolescence” really seems to resonate–much more than the average teen flick fluff.

Sarah Michelle Gellar as the school’s headmaster (who is looking gorgeous, btw) sends Drea off with some excellent words of wisdom only a teen star from the ’90s can:

“May I let you in on a little secret? Your whole life you’ve been cocooned. Everything you’ve done, everything that’s happened to you, it’s brought you to this moment. And now you’re a butterfly, a beautiful kaleidoscope of trauma and resilience. I know it feels like hell, but you are never more alive when you’re 17 years old. Fuck figuring out who you’re meant to be. Stay lost as long as you can.”

Oh, how I wish my high school guidance counselor had said something like this to me.