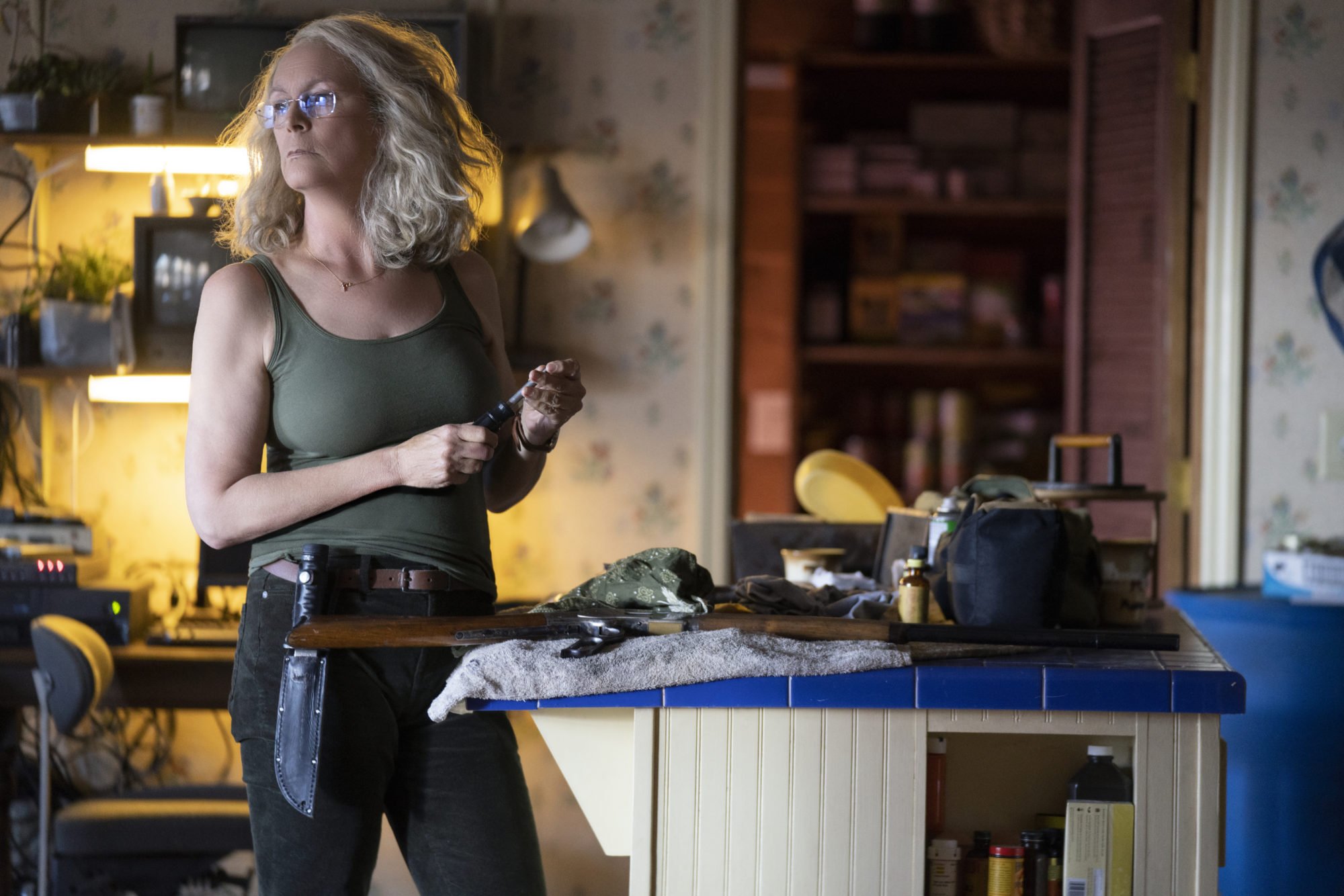 There have been, and always will be, feminist readings of John Carpenter’s 1978 classic, Halloween. From the examination of the final girl trope as seen through Laurie Strode (Jamie Lee Curtis) to the resilience, strength, and tenacity of her character, there’s a lot to unpack when it comes to a feminist examination of the film. And while countless articles look at women’s empowerment in the Halloween franchise, it should be noted that Curtis has gone on record saying that the first movie is an accidental feminist gem. As documented by Rachel Simon in her piece “Jamie Lee Curtis Is Here To Tell You Everything You Think You Know About ‘Halloween’ Is Wrong,” she quotes Curtis as saying, “It was not a feminist statement. It had nothing to do with the fact that promiscuous girls died and the virgin lived, none of it … Many people say the intention was something else, and I’m gonna tell you it wasn’t. It was written as an emotional journey of a very vulnerable girl being chosen as the center point of this story, where this vulnerable creature is in collision with pure evil, and she’s somewhat an archetype of this young vulnerable dreamer. I don’t think there was an intellectual analysis attached to it in the slightest.”

So while the feminist message might be up for debate in the first installment of the series, we wanted to examine the explicit nature of the one being elaborated on through Strode’s character in 2018’s Halloween, directed by David Gordon Green.

Taking place forty years after the original film, Halloween follows Laurie once more as she comes face-to-face with Michael Myers (Nick Castle) following his escape from police custody while he was being transferred from the Smith’s Grove Psychiatric Hospital to a maximum-security prison. Although Laurie tries to warn her daughter, Karen (Judy Greer), and her granddaughter, Allyson (Andi Matichak), of Michael’s return, neither of them take her warning seriously. As is generally the case with slasher films, a bunch of people die at the hands of the ruthless killer, Laurie is proven right, and eventually, she faces off against her tormentor. Unlike the other Halloween movies, Laurie is ready and waiting. Her house has been transformed into a death-trap for Michael, her daughter—who was removed from Laurie’s care when she was twelve—is trained in combat, and collectively the three generations of women trap Michael in the basement of Laurie’s house and set it ablaze.

The Trauma of Surviving

One particularly feminist aspect of Laurie’s character—you know, aside from the constant perseverance against an unstoppable force that’s aiming to kill her—is the movie’s exploration of trauma and overcoming it, in addition to the believability of women in modern culture.

Laurie Strode isn’t a glamorous heroine in this iteration of Halloween. She hasn’t been romanticized as some juggernaut who remains unphased by Michael’s repeated attempts on her life. Instead, she’s shown as an alcoholic and as an agoraphobic woman who finds comfort and security in her fortress of a home. Despite her history of battling Michael, her family and even the authorities believe she’s being paranoid and overestimating the danger he poses to the town of Haddonfield. She’s routinely chastised for how she raised her daughter to the point where Karen was taken away from her as a child and isolates herself (and her family) from her mother now that she’s an adult.

Laurie, despite having proved herself as a tremendous survivalist, isn’t believed at face-value about Michael. She’s treated like a paranoid recluse, not a woman doing her best to overcome past trauma. And while the movie tries its best to make Laurie appear overly cautious, it’s ultimately her fear, preparedness, and the training she gave her child that ultimately saves her family from the killer.

Additionally, Laurie’s fight with him isn’t about revenge, it isn’t about trying to prove herself to the town, or even to her family, rather she attempts to find some semblance of peace in her life. Michael, up until this point, has been hunting her. She’s been the prey, not the predator, and her future has always been uncertain, thanks to Michael in the State’s control and out of hers. Now, in the 2018 iteration of Halloween, Laurie is reclaiming her agency and taking charge of her future. She’s meeting Michael head-on so that she can finally get the rest she’s more than earned. She’s not trying to kill him in a final act of vengeance, but rather in a final act of self-reconciliation.

And, given the sh*t this franchise has put her through, we don’t think she’s asking for much.