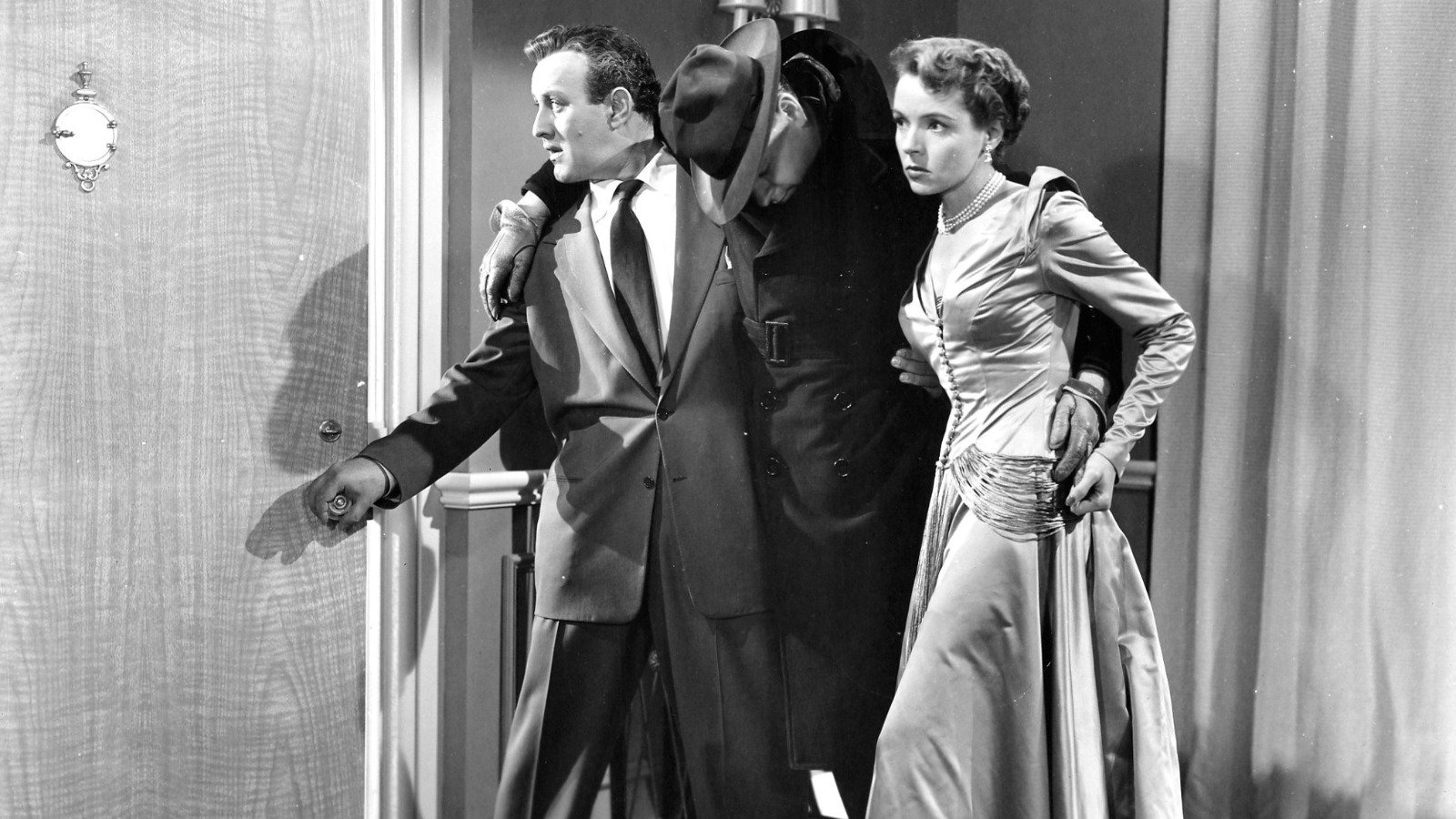 Underestimation is arguably one of Man’s greatest flaws. Once an individual has settled into a false sense of security or is perhaps convinced of his or her own superiority against all possible odds, the lone variable to disrupt that security shall always arrive at the worst possible timing. Anybody would be hard-pressed to not admit to a time when most unwise habits befell them. Even when weighing the opposition and potential variables, the factor that shall ultimately prove to be their undoing can easily be the least anticipated. In crime movies, the culprits frequently attempt to plan the perfect caper or murder, only to be undone by the simplest of clues left behind. The unexpected harbinger of doom could be a piece of evidence, just as it might be a person, maybe someone even quite close. In the 1950 Felix E. Feist directed noir The Man Who Cheated Himself, one crooked cop discovers that his greatest foe is someone who at one time would have been his greatest ally.

A husband and wife (Howard Frazer and Jane Wyatt, respectfully) engage in their final feud prior to the husband of his once beloved wife, Jane, for good, claiming that he is to board a plane for Seattle thereafter. Once gone, Jane notices a receipt for the purchase of a handgun. Suddenly struck by the fear that her former beau has ulterior, nefarious motives, she calls upon the San Francisco Police Department lieutenant she has been having an affair with as of late, Ed Cullen (Lee J. Cobb), who rushes to her home at the same time as her husband, who had in fact planned to murder Jane for her money. The attempt is botched, with Jane killing her assailant instead. Forced with the decision to either apply the law in its full force or go with his heart, Lt. Cullen takes the latter route, concocting a plan that will see Jane remain out of the clutches of the law. As happenstance would have it, the department mandates both Ed and his younger brother Andy (John Dall) with the task of solving the murder case. Ed, being the more experienced and seasoned detective, is none too worried at first. Reality slowly but surely sets in as Andy, admittedly an aloof and happy-go-lucky type upon first glance, proves to be a far greater investigator than Ed and Jane would have liked.

for a woman like this … a man would do anything … even murder.

The Man Who Cheated Himself falls into the odd category of films which are rarely if ever brought up when discussing the genre yet is handsomely equipped with a capable director, a strong cast, a sufficiently intriguing plot, at least one truly impressive scene, and a wonderfully classic setting in beautiful San Francisco all this despite that was evidently made on a very modest budget. In all likelihood, it comes down to the fact that the film never rises above the call of duty in developing its story of one brother trying to outwit the other with the other knowing it in a murder mystery scene, the lone exception being the climax, which the review shall get to shortly. While that may not come across as a ringing endorsement, with director Felix E. Feist at the helm, the movie does prove to be a thoroughly enjoyable experience, even though astute viewers who have seen other stories of this ilk told shall undoubtedly clue in on how it shall end.

Save for one sequence, Feist’s direction is more workmanlike than anything else. He never lets any unorthodox cinematography or fancy editing techniques compromise the thickening plot. For the most part, Feist is comfortable with allowing the story and increasing friction between Andy and Ed guide the movie without distraction. Anchoring this portion of the movie are the two central leads, Lee J. Cobb and John Dall, who, as brothers, play their respective characters as diametric opposites. Cobb’s Ed has, for lack of a better term, been around the block with regards to the world of detecting. If one were to succinctly describe him, from his mannerisms to his approach towards the job at hand, it would be ‘rugged.’ Ed is the scruffy dog who needs not learn any new tricks. Andy, on the other hand, is brimming with enthusiasm at the chance to prove himself. His landing the job at the police department at the start of the picture is shown as being more due to his elder brother’s methods of persuasion, thus causing the viewer to question whether Andy is genuinely up for the challenge. Clean cut and expressive almost to the point of overacting in certain scenes, John Dall is the Ying to Lee J. Cobb’s Yang, simply put. The film reminds the audience every now and then that the two play brothers, which might have to do with the fact that the actors look nothing alike nor do they lend even remotely similar inflections to their respective characters. The female leads in the picture, Jane Wyatt and Lisa Howard are not awarded nearly enough screen time as the men are. Lisa Howard is in precious few scenes and, by playing Andy’s supportive, fun-loving wife, serves merely as window dressing. Jane Wyatt’s role is another story altogether. Her performance is more difficult to ascertain, although whether that is a function of the script, directorial choices or her talents as an actress is open to debate. The film never reveals why it is that Ed is infatuated with her character, a woman who has been married multiple times already, and explicitly suggests that once she and Ed marry, he probably should no longer be a detective. These are more than enough hints suggesting that if Ed and Lois prove successful in their escape, there are no guarantees of a ‘happily ever after’. Lois simply does not come off as a very attractive woman, making it all the more curious that Ed would want to circumvent the law for her sake. Regardless, for him it is already too late: he has thrown himself into this mess without much of a safety net other than his conviction that his younger brother shall fail in mission to unravel the mystery.

The majority of the picture is therefore a perfectly serviceable potboiler in which the viewer witnesses one bad cop, relatively speaking, attempt to outwit one good cop. Much like in so many Alfred Hitchcock films, the movie’s greatest asset is that the viewer is privy to Ed’s machinations, therefore making the scenes in which Andy comes so close to cracking the case all the more interesting and suspenseful. The real standout sequence however is definitely the climax, which looks and feels entirely different from everything that comes before it. Once the truth behind the murder is discovered, Ed and Lois make a desperate dash out of town, hoping to catch a plane before law enforcement can ensnare them. With the exit via the Golden Gate Bridge blocked by the police, they drive down a lone street which takes them underneath the bridge itself just along the water where lies a very old looking, clearly desolate multi-story complex with a watchtower at the top. Ed reveals that it is an area where he and Andy used to play as children. Andy deduces that this is precisely where Ed would think of hiding and drives to the very same place. From then on is a tension-filled game of hide and seek between the two brothers which is exquisitely well shot. No musical cues whatsoever accompany the action, only the loud noises of Andy’s footsteps as he runs and walks the staircases and hallways of this spooky looking complex, instinctively convinced his brother is lurking somewhere in the shadows. Curiously enough, the suspense of the scene practically encourages the viewer to side with Ed rather than Andy. The latter has becomes the seasoned hunter, the former has become the weakened and desperate victim of his own foolhardy decision to help out the woman he loves. The fear of getting caught, the notion that the murder itself which started the entire debacle was a mistake, these elements suddenly make the character of Ed all the more sympathetic, which is yet another trick Hitchcock excelled at: making the audience side, if temporarily, with the antagonist of the piece.

The climax does help The Man Who Cheated Himself earn a few extra points than otherwise would have been the case based on what comes before. As a whole, the picture is perfectly adequate, aided mostly for two very strong actors giving compelling performances. The story is decent, if unspectacular and certainly nothing viewers have not seen before. A nice little film, but fans wanting to explore film noir can find better alternatives.

The Big Combo is an Early but Great Film Noir