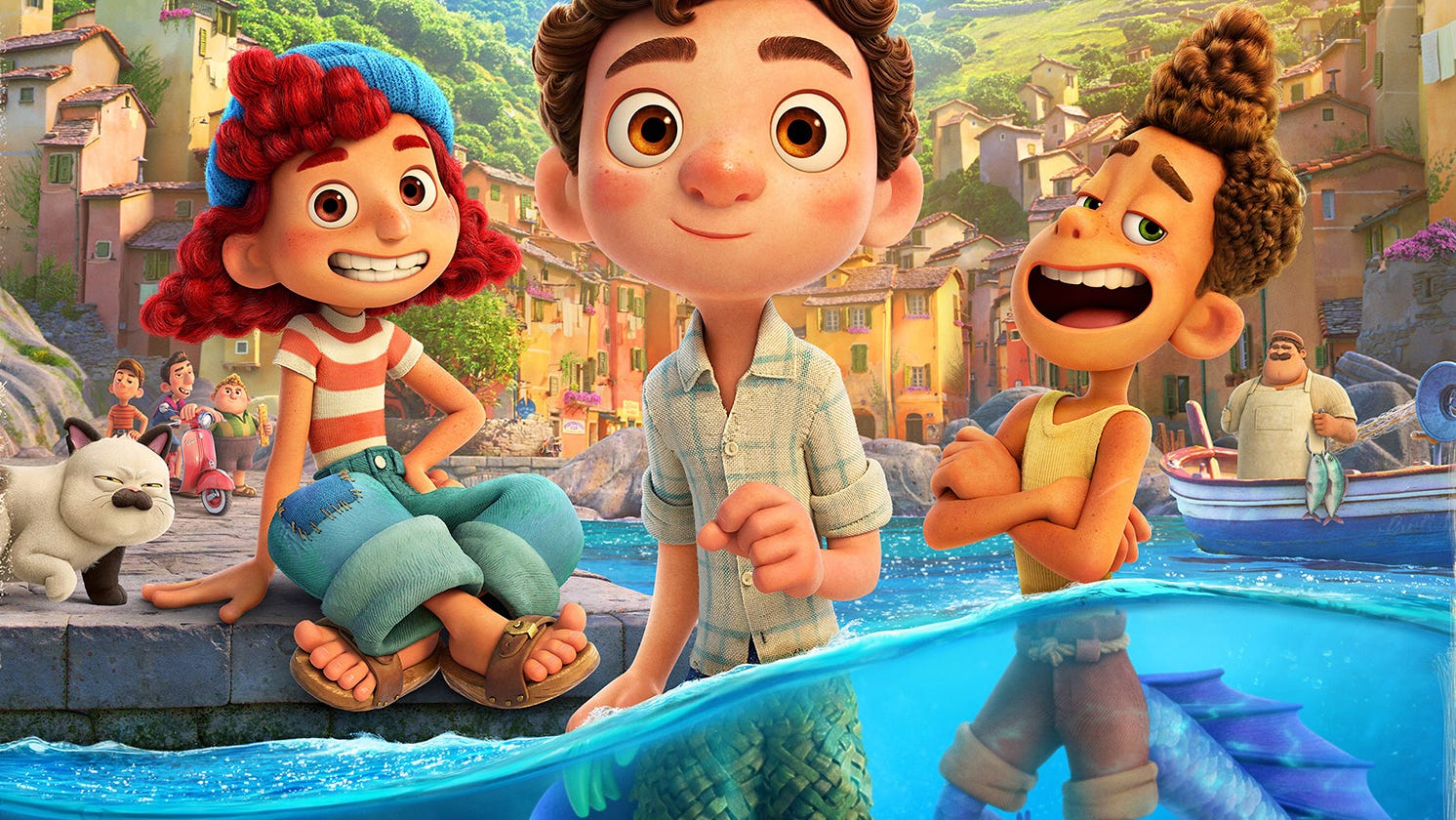 Pixar’s Luca has made quite a stir since it was recently released on Disney+. Free to all Disney+ subscribers, Luca explores the developing friendship between two boys with a secret they are trying desperately to hide from the townsfolk of Italian island Portorosso. Released very deliberately during pride month, Luca is loaded with queer subtext, which, though amazingly subtle, can be seen and felt throughout the film.

First of all, comes the secret shared between Luca and Alberto. Both are members of a race of fish people that the humans call sea monsters. Of course, they refer to themselves that way as well, but when they venture to the human world, they must keep their true nature a secret lest they be hunted and killed by the townsfolk. Naturally, this is a metaphor for how many queer young people will try to hide their sexuality or gender identity to fit in with their peers.

The metaphor is strong as when Luca and Alberto come ashore, they immediately transform into otherwise ordinary boys. However, if they get wet, they will immediately reveal their true form and be exposed to anyone in the vicinity. Luca builds layer upon layer upon layer into this analogy throughout its short runtime with the notion of land and sea and their secret literally hidden below the waves or underneath the surface.

For instance, the immediate bond that Luca and Alberto form comes from their shared secret. Since they don’t have to be on guard around one another, they can feel free to be their true selves. However, jealousy begins to manifest in their friendship when they hang out with a human girl, Giulia. Though the film never lays down any concrete evidence of romantic feelings between any of its three leads, the feelings of anger that begin to show themselves in Alberto are also noteworthy.

As mentioned above, the film doesn’t come down on any certain terms about the sexuality of its characters, but people who are bisexual are often not seen as “real gays.” In essence, if Luca can bond and grow with a human girl, Alberto may fear that he is not what he thought and feel threatened by that, causing anxiety and a fear of loss for him. Luca, meanwhile, is only doing what comes naturally to him and exploring the surface world above as he sees fit.

This dichotomy comes to a head when a frustrated Alberto “comes out” by revealing himself to be a sea monster to Giulia. While he expects Luca to back him up immediately, Luca instead chooses to keep his secret and join in on the persecution of Alberto. Shouting “sea monster!” at him as though it were a slur, this betrayal forms the dramatic climax and conclusion of the film.

It’s common knowledge that sometimes minority groups will pick on members of their own kind or another minority to feel safe or superior, which is displayed here. For instance, some gay people look down on trans folks, and there are dark-skinned black people who bully light-skinned blacks, or even outright hostile relations between some members of the Latinx and African American communities of America. It’s a sad truth that sometimes those disenfranchised by the system and its social hierarchies will occasionally align themselves with the same system that oppresses them, but it’s a fact nonetheless.

That the two see the surface world in different terms is no accident either. Luca, raised in a loving family that encouraged him to never go near the surface for his own safety, sees the world above the waves as filled with endless possibilities and forbidden knowledge. But, like many kids, he doesn’t realize that his parents are trying to protect him from the inevitable pain that he will experience once his secret is revealed.

Alberto, on the other hand, was abandoned by his father. Another sad truth for many LGBTQ+ youths is that they’re kicked out of their homes when they come out to their families, which is reflected in Alberto’s story. Heart-breaking though it might be, Alberto is forced to squat in an abandoned building and count the days since his father left him there, hoping against hope that one day he will come back for him. Thus Alberto is less afraid to reveal his true self to the townsfolk when the time comes; he’s already felt the pain of persecution and is not as fearful of it as Luca is.

Finally, the film’s subtext comes to a peaceful conclusion when Luca also reveals his secret to the entire town of Portorosso to rescue Alberto from a group of bullies that want to kill him. Suddenly the two are reunited, and, happily, most town citizens are not bothered by the revelation and begin to accept the two as members of the community. Emboldened by this, other townsfolk “come out” as well, revealing their secret to the community in turn.

In this way, Luca shows how important Pride Month truly is. If LGBTQ+ youth can see others in a society like them thriving, growing, and living as a part of the community, it gives them a level of hope for acceptance that could literally save their lives. That’s why films like Luca are vital because kids who are old enough to watch a movie like Luca may have already sensed that there is something “different” about them than their peers.

Though Luca can be watched and enjoyed without even picking up an inkling of the queer subtext, its inclusion makes the movie an infinitely richer experience and a story that will fill hearts and defuse hatred for generations to come and, for that, Pixar ought to be commended. We need more stories like Luca.

Italian Suspense in Swinging London: What to expect from Last Night in Soho