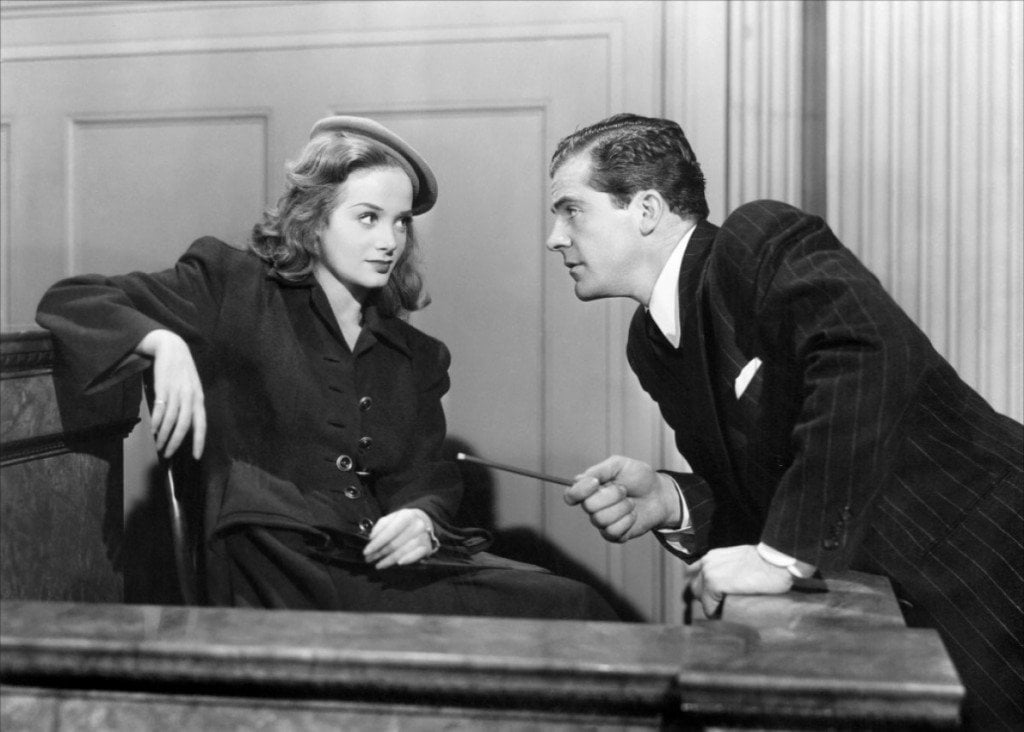 Elections are won and lost for a multitude of reasons, many of which are of public knowledge… Even so, the tactics of certain politically oriented maneuvers in campaigns are just as frequently a secret to the public eye, inviting constant speculation as to what is transpiring behind the well-guarded curtain. In a reasonably fair and free democracy, public pressure will encourage politicians and their staff to venture down whatever avenue necessary to secure a term in office in the event of an election. Said avenues may not necessarily be kosher nor morally justified, but then again, all seems fair in politics when the prize is power. Boomerang, directed by the much-celebrated Elia Kazan, is another of the auteur’s many projects that took an unflinching look at the various errors of human ways, in this case, the political ramifications of public outrage in the leadup to a mayoral election and following the apparent ineptitude of local police work.

Inspired by true events (therefore making the picture a sort of ‘docu-noir’), the story is set in the community of Bridgeport, Connecticut, where, on a peaceful late September evening, a priest much beloved in the town is killed, shot in the head in open public. The murderer successfully flees the premise, but not before several eyewitnesses get a decent look at the fellow, or so they claim. Despite their information, the police, led by chief Harold Robinson (Lee J. Cobb), fail at snaring the culprit. The investigation lasted a shockingly long 18 days, setting the mayor and his political bureau into a tizzy. An election is fast approaching, and public discontent at the failure to bring the murderer to justice has spawned fears of defeat for the party-wielding power. Even newspaper columnists, such as the charismatic Dave Woods (Sam Levene), are poking fun at the police force, criticism that extends to the mayor’s office as well. Eventually, details lead to a man (Arthur Kennedy) located in Ohio of all places. He is brought back to Bridgeport and, under tremendous duress during interrogation, confesses to the crime. Something about the process smells fishy to state attorney Henry Harvey (Dana Andrews); however, and even in the face of staunch political pressures, he chooses to explore the possibility that the man may, in fact, be innocent.

Boomerang is the sort of motion picture Elia Kazan was known for making, even though it is not near the top of the list of his most popular and oft-mentioned realized projects. Kazan was not only a good storyteller who reveled in exploring daring, thought-provoking stories concerning protagonists worthy of the audience’s empathy and time; he also tackled critical subjects that resonated loudly with the culture he lived in at the time. In fact, some of the topics raised in his films are still of importance today in the early 21st century, most notably backroom political wheeling and dealing and the less than exemplary behaviours of people in power when their careers are on the line which is what Boomerang explores unforgivably. The unexpectedly prolonged duration of the police investigation makes the mayor and his staff sweat more than they had anticipated, not to mention that the poor victim of the crime per se was a man everyone in the community respected and loved. The desire to bring the villain to justice is thus understandable, but as more time elapses, the greater the desperation seen in their eyes and in the eyes of those who must answer to them, like police chief Robinson. The snowball effect of pressure to stay in office, as in the case of the mayor’s team, or to save face, as with the police chief, causes them to go beyond the boundaries of what seems justifiable in a democratic system, but such is the behaviour man, a flawed creature to say the least. A man is incorrectly assumed guilty, practically forced to sign a confession through the utilization of intense, dubious interrogation tactics, and the state attorney, upon choosing to play against the odds and his colleagues in trying to prevent the man from being convicted, sees his career and that of his wife threatened by people who thought he could trust.

Boomerang is about how the truth, when thrown away, always comes back in force…

Another commonality in his films is the economy of the scenes to translate ideas and story beats for the viewer. This goes beyond any questions of running length but rather concerns the importance of a given scene. Where and how does it fit into the overall story? What does it add, and how important is it in developing the film’s themes? Boomerang is an astonishing example of this lost art. It even succeeds in pulling off the frequently misused strategy of moving backwards in the story to communicate further information about the departed with aplomb. The aforementioned snowball effect is brilliantly realized through a series of fairly short but no less important scenes in which politicians worry,  police force members grow weary, and ordinary citizens grow angry as newspapers feature articles and cartoons about the former’s ineptitude. Rather than hopping from a pointless scene to a pointless scene that would otherwise needlessly stretch the film’s running time, Kazan’s is extremely judicious in selecting scenes. By the time the plot shifts focus onto attorney Henry Harvey, everything has been beautifully set up, making the subsequent attacks on him and his wife (Jane Wyatt)  all the easier to accept and comprehend.

On the topic of Harvey, the casting of noir star Dana Andrews was a brilliant coup as well. The actor has a very well meaning face and easily plays the part of an affable, intelligent and easy to like personality. One can fully understand why he has gotten as far as he has and why certain personalities would like to seen him in office as state governor in the future. These same people somehow underestimate is resolve however, which is when Harvey fights for the accused’s freedom rather than conviction. What so many wanted to sell as an ‘open and shut’ case Harvey uses to genuinely serve justice, true justice. Andrews is one of those actors who can surprise many when his characters demonstrate strength in resolve because he looks like such a calm personality. The courthouse scenes, while not shot in any way that will amaze and stun viewers, are tremendously energetic mostly for Andrews’s heroic performance. Lee J. Cobb is his usual grumpy self as the police chief, which is always quite amusing. A very young Karl Malden shows up as a detective part of the investigation and interrogations. Unlike Andrews, Malden does always seem like a nice fellow, even when trying to play ‘bad cop.’ Arthur Kennedy shines as the poor soul caught in the mire of the police’s desperation, expressing anger, fear and calm resolve once he concludes that everything is stacked against him. Sam Levene is wonderfully witty and smart as a major newspaper journalist striking the ire of the police chief, always to get the scoop on the latest updates on the case.

If there is a crack in the armor, it would have to be when the film strongly suggests who the actual killer might be. It does so on multiple occasions, particularly in the latter half once the action mostly shifts to the courthouse. The element of surprise would have understandably been preferable. Oddly enough the case upon which the movie is inspired actually happened and remained unsolved, so the filmmakers’ desire to hint at who the real culprit might be is more a distraction than anything else. One might assume this was decided to appease audiences who would have demanded that any version of resolve, however cheaply attained, be communicated.

Well cast and smoothly directed, Boomerang proves a captivating piece about human frailty in the face of defeat and the resolve of the few to discredit what should be understood as wrong but is sold to the public as right.

30 Years Later: Terminator 2 Has Secured its Place as a God Tier Action Movie

25 Years Later: Independence Day – Over the Top and Fun