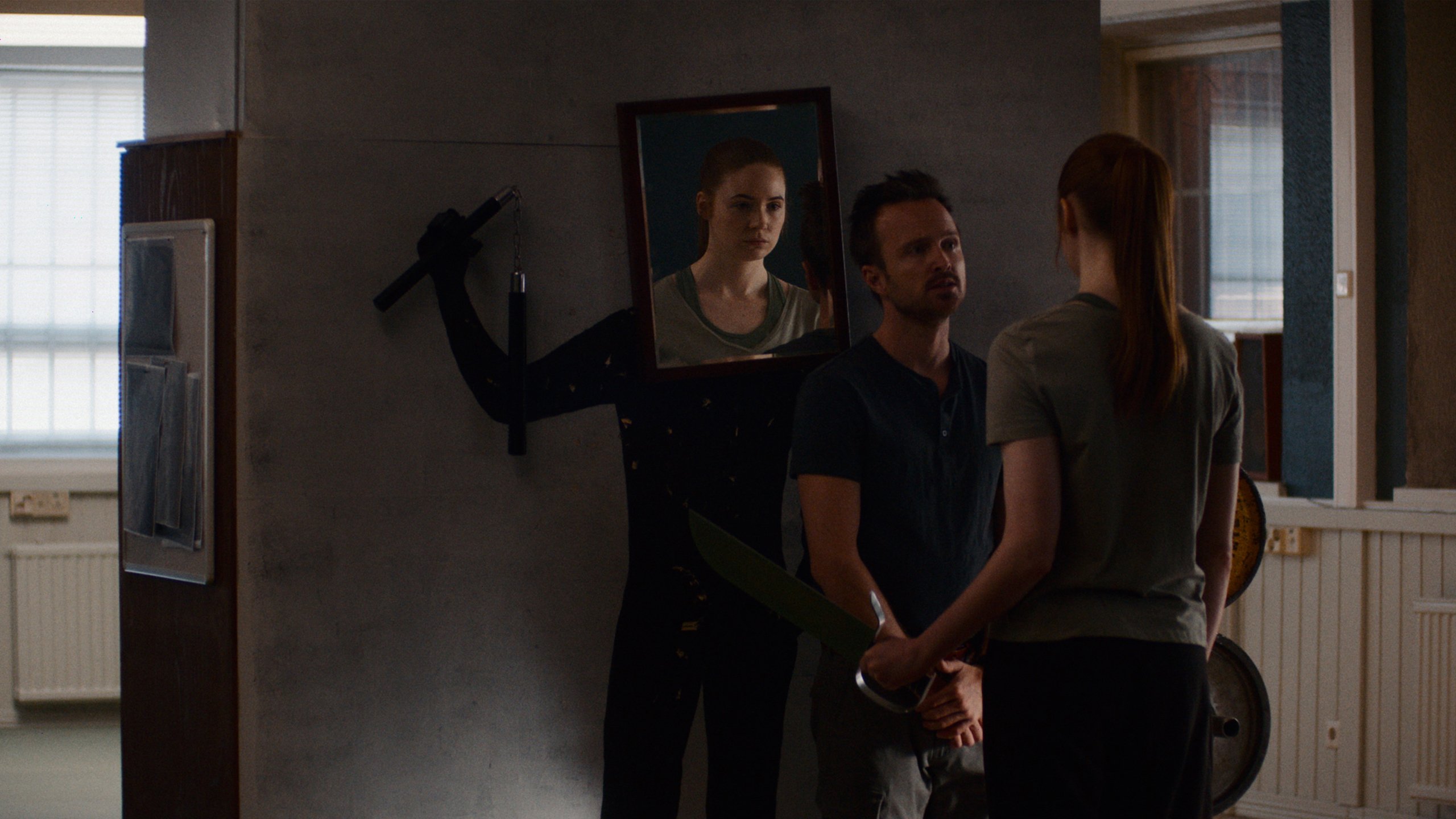 Director Riley Stearns, back in 2019, came out with the South by Southwest debut The Art of Self-Defense. Starring Jesse Eisenberg and Alessandro Nivola, and set in the movies’ most evil and sadistic karate dojo since Cobra Kai, The Art of Self-Defense is a wildly audacious and hilarious satire about toxic masculinity, one that seemed at the time like an unintentional takedown of the then-ascendent guru Jordan Peterson.

Now, Stearns has returned with another dark comedy satire, this time with more of a futuristic sci-fi bent. That film, Dual, has its moments, but it doesn’t quite get over the hump the way the director’s previous film did.

Stearns’ film has a premise remarkably similar to Swan Song, the dramatic film starring Mahershala Ali that debuted on Apple TV+ near the end of 2021. This film, like that one, features a person who learns they’re dying and is given the option of allowing a clone to replace them in their everyday life. Both films also feature plentiful scenes in which the original character and the clone are on screen together.

Dual, however, takes a very different tone and approach from that of Swan Song, which was more dour and tragic than anything else. Dual is occasionally very funny and has much more of that off-kilter energy. Also, the characters speak in bizarre, almost inhuman cadences, in a way that many critics at Sundance compared to the work of Yorgos Lanthimos (The Lobster, The Killing of a Sacred Deer.)

Karen Gillan plays Sara, the protagonist, who learns she is suffering from a terminal illness, and so she allows the clone to be created. But soon, she realizes it was a mistake- not only is the clone in better shape than she is, but it seems like her boyfriend and family like the clone a lot more than they like her.

The other twist is in this world if the dying person doesn’t end up dying, the two clones must engage in a fight to the death, with the winner getting to keep going in that identity. Therefore, Gillan avails herself of the services of a trainer (Breaking Bad‘s Aaron Paul) to prepare her for the big fight.

Dual is entertaining on its own merits, with some good jokes and a winning performance by Gillan, who’s very much up to the task of playing two people at once. Paul, whose post-Breaking Bad movie star run petered out relatively quickly, makes the most of another chance in this secondary role.

The problem is, none of the satirical punches really land. I guess it’s supposed to be a fable about the perils of modern technology, but other films have gotten there before and done it better.

Dual, largely due to pandemic restrictions, was filmed in Finland, which doubles for a U.S. location of unknown specificity. This adds to the general weirdness and unsettling nature of the premise. Overall, Dual is an entertaining watch, even if it doesn’t land quite so many punches.