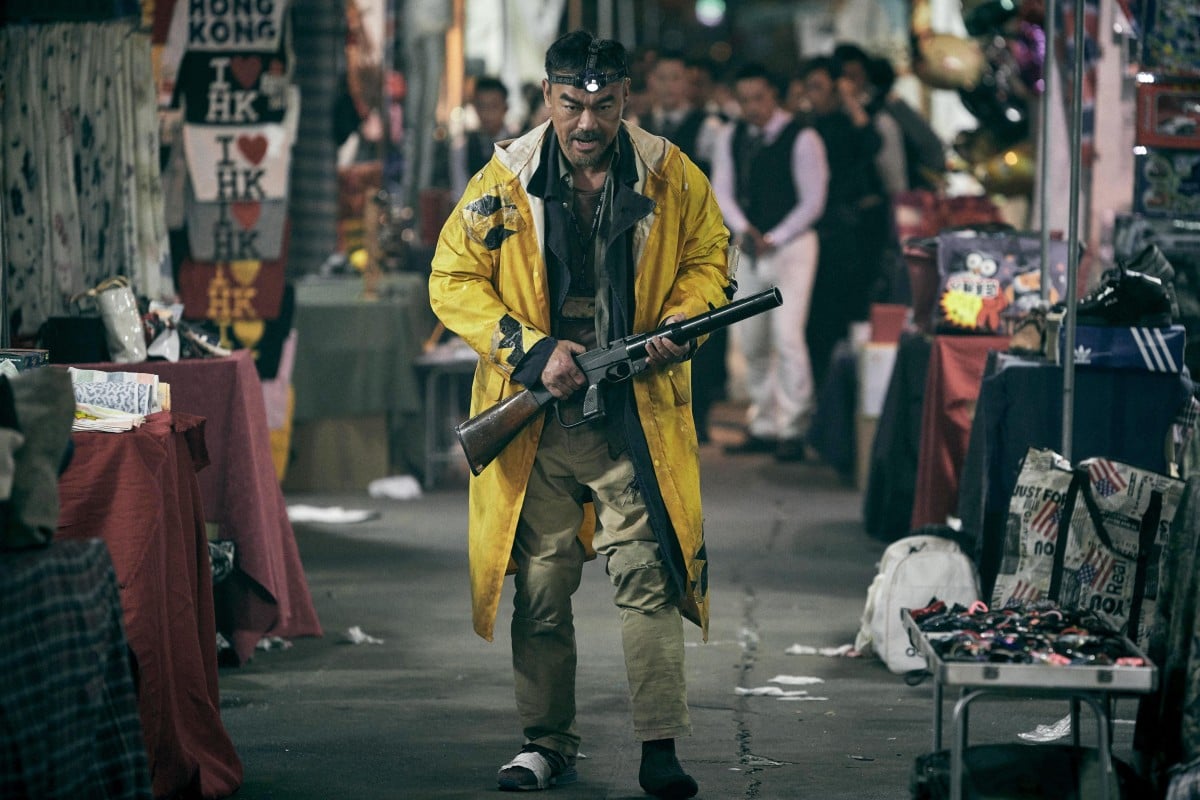 Ka-Fai Wai has not made a movie in quite some time. The last time his name was credited as director of a feature was back in 2009 for Written By. According to IMDB, his producer credits have not been plentiful as of late either, with only 2 movies between 2014 and 2021. Times change. So does public interests and trends. 13 years later, here comes Ka-Fai Wai with Detective vs Sleuths, an action film that feels like it wants to harken back to a cinematic style of yesteryear whilst giving audiences as much as they can possibly handle. Just how much can an audience handle is an appropriate question in this instance.

Summarizing Detective vs Sleuths is a challenge in of itself. On one hand, writing too much would divulge spoilers that certain viewers would prefer experiencing on their own. Conversely, it’s difficult to wrap one’s head around what transpires in Ka Fai’s picture. As succinctly as possible, Ching Wan Lau plays Lee Chun, a former Hong Kong homicide detective, now homeless. Just because he doesn’t have address doesn’t mean he has nowhere to go. Gifted or cursed, Lee Chun suffers from a unique form of schizophrenia by which imagined versions of former victims, killers, and soon-to-be victims help him solve crimes. That isn’t the half what his film strives for. The Hong Kong police need Lee’s help to bust a gang of thugs that call themselves “The Sleuths.” Their raison d’être involves killing off various individuals who wronged the parents of the gang’s members. Married detectives Chan Yee (Charlene Choi) and Fong Lai-Sun (Raymond Lam) try to unravel the mystery of the Sleuths and maybe even help Lee Chun exorcise some demons.

The following paragraphs will divulge mild spoilers, if only because Detective vs Sleuths is otherwise an extremely difficult film to discuss.

Director Ka-Fai Wai doesn’t hold back with his latest effort. When considering he hasn’t directed anything in over a decade, his new picture makes one wonder if he is simply unleashing every idea percolating in his mind. Every. Single. One. Where does one start when reviewing it? For starters, as alluded to in the opening paragraph, there is a sense that the filmmaker is, in part, striving to rekindle the fire that lit Hong Kong action flicks of the 80s and 90s. There are sequences when so many bullets zip by (conveniently never hitting any target until they absolutely must), one may be forgiven for believing John Woo stepped on set for a few days to direct them. Bullets cascade from above, erupt from below, ricochet off every possible banister, handle, and windshield. One assumes ammunition is inexpensive in Hong Kong.

In that respect Detective vs Sleuths indulges itself a bit too much. The first time such a sequence develops is rather amusing. By the third time, when even more gunfighters are involved and therefore even more bullets miss their mark, the effects run out of steam. The movie’s climax, which eats up a solid half hour, is a barrage of over-the-top gunfire and explosions. Ka Fai Wai’s efforts are an example receiving too much of a good thing. Essentially no one is in peril until the director deems it necessary for the plot.

Then there is Lee Chun’s mental state. It feels reasonably safe to argue that the movie lives or dies by this character. People will either think it to be remarkably stupid, comically entertaining, or brash and bold. Make no mistake about it. Ching Wan Lau fully commits to the role. He’s running all over the place, jumping into everything, playing multiple roles, all of which are stressed out of their (and his) skull. Whether or not the writing that goes into his character is “good” is up for debate, but the actor is giving a memorable performance. It’s so zany in concept yet performed with such sincerity. The actor must have been exhausted after a day’s shoot. As to why he sees visions of people who are both dead or alive, the film merely chalks it up to the character’s mental instability. No one said this movie was kosher.

The review has still only covered the tip of the iceberg. It was previously established that detectives Chan Yee and Fong Lai-Sun of Hong Kong police are married. The former is also expecting. By the looks of her belly, the pregnancy is far advanced. If anyone thinks that will prevent her from running, jumping, and shooting her pistol with infinite ammo, guess again. She and the protagonist form a tenuous alliance of sorts. Since Lee Chun isn’t a policeman anymore, he doesn’t carry a gun. He pretends to fire at criminals with his imaginary hand pistol while Chan Yee does the real shooting from behind. It’s utter madness, equal measures hilarious and dumbfounding.

The musical score accompanying the action beats suggest this is real drama. Tonally, Detective vs. Sleuths is baffling. That doesn’t mean it’s never entertaining. The first time Lee Chun and Chan Yee are running and gunning after bad guys (well, only one is gunning), it’s so surprising that one cannot but help enjoy the mischief. That’s probably a decent way to succinctly describe Ka-Fai Wai’s film. It’s mischievous from start to finish. The problem is that it’s steadfast on delivering virtually nothing other than that. Yes, it’s sometimes fun, but it also produces a numbing effect.

Plot twists abound, the past comes back to haunt important characters, and explosions leave mild skin burns. Viewers be warned. The movie is off the wall coo-coo. The Fast and Furious entries have been described as playing fast and loose with reality and overhyping their drama. Detective vs. Sleuths is writer-director Ka-Fai Wai answering with “Hold my beer.” If one is ready for it, go wild. Have fun. If not, it’s best to stay away.

But then again, the bullets can’t hit anyone.

Fantasia 2022: Glorious Falls a Bit Short of its Name