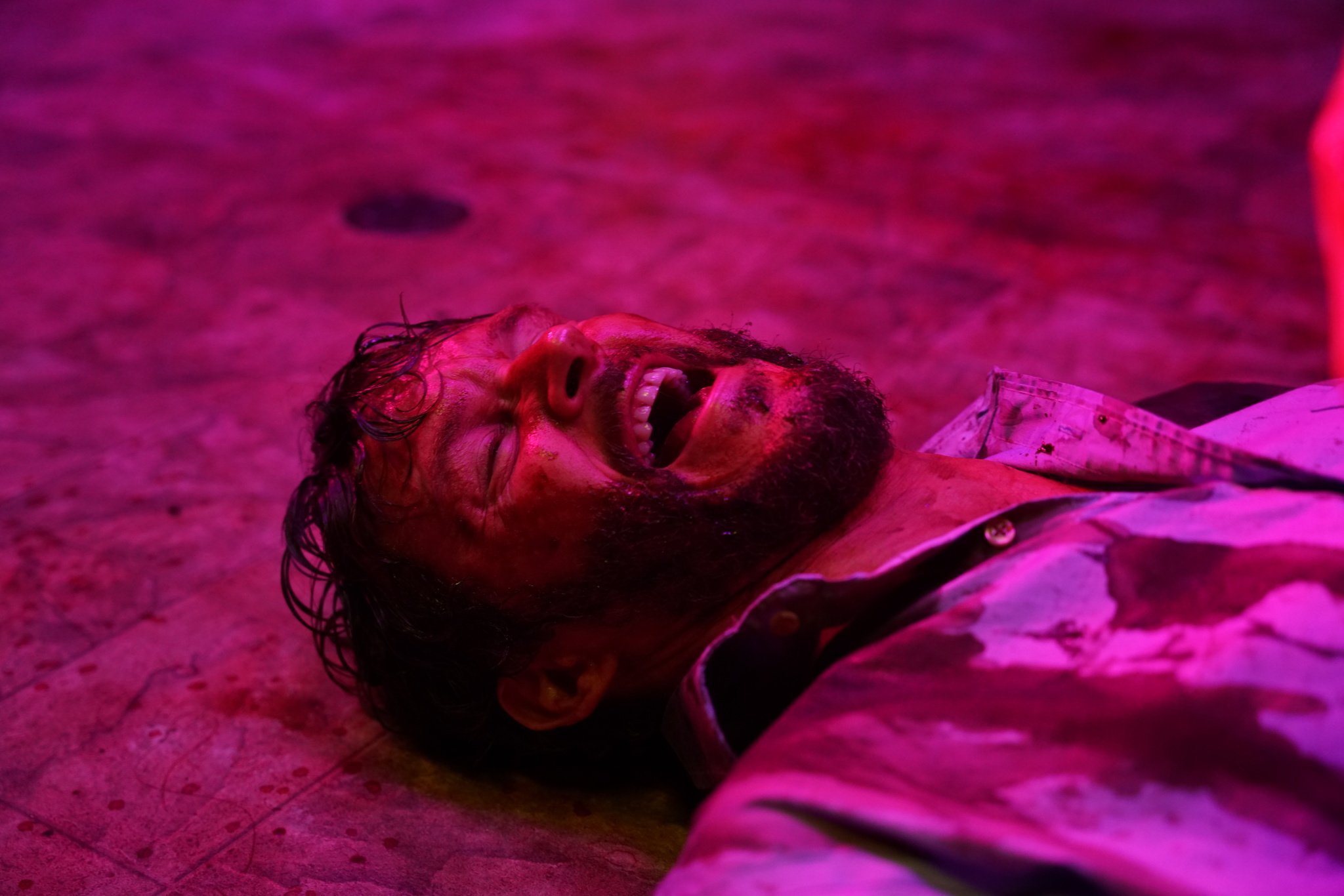 Rebekah McKendry’s bathroom stall cosmic horror has promise, but it doesn’t quite follow through.

A man finds himself trapped in a dirty bathroom with a god of destruction who communicates to him through a grungy glory hole. If this was the pitch for a short, a comedy sketch, or an episode of an anthology series like Tales From the Crypt, it would be compelling, but it’s hard to imagine how the idea works for a feature-length film. Unfortunately, any doubts about the premise’s viability as a feature are proven true as Glorious struggles to fill its modest 79-minute runtime.

To its credit, there are about 20 to 30 minutes worth of enjoyable content in Glorious. The dialogue is fun and witty, there are a few laugh-out-loud moments, and the acting and visuals are solid throughout. Unfortunately, while the peaks are really good, the valleys are really noticeable; there are too many dull moments where it’s clear the film is stalling for time to try and stretch out its concept to a full feature length.

The plot is simple but effective. After a rough breakup, terminally nihilistic Wes (Ryan Kwanten) gets drunk at a public rest stop. When he runs to vomit in the toilet, he finds himself locked in the bathroom with a violent god (played brilliantly by J.K. Simmons) who needs him to perform certain actions in order to prevent the destruction of all life. It’s a fun mix of cosmic horror and comedy with a few clever twists and some fun worldbuilding that would have made a really good 30-minute episode of Tales from the Crypt but makes for a disappointing film.

Another major problem is the way that Glorious fails to follow through with a major part of its premise, which may be more an issue of bad marketing than bad filmmaking. The title suggests that the glory hole will be a central feature, implying that Glorious will be at least somewhat sexually charged or engage in some way with sexuality. Unfortunately, the glory hole is completely arbitrary; Wes could be trapped in literally any room with any type of window, hole, or other gaps through which an ominous voice could communicate with him. For a film about a glory hole, there was pretty much no sex whatsoever, which begs the question of why the film is named after what ends up being an ultimately arbitrary element.

Arbitrary seems to be the key word when discussing Glorious. There are so many aspects of the film that seem randomly chosen or thrown in, and it’s never clear why most of them are there or how they cohere into a whole. It’s clear that Glorious wants to connect its high-concept cosmic horror premise to some sort of grounded, human backstory, but this backstory is neither compelling enough, coherent enough, nor relevant enough to the cosmic horror premise to justify itself. Much like the titular glory hole, most of Glorious feels incoherent and unplanned.

Glorious is, in many ways, a tale of missed potential. At the very beginning, an ominous stranger makes an insightful comment that many things are not actually broken – people have just given up on them. This is a compelling thematic statement that seems like it will be relevant later on; however, it then fails to have any relevance to the rest of the film. The entire encounter with the ominous stranger is promising, but then it never comes up again, and this constant lack of follow-up is frustrating. There is also an interesting twist at the end, but the film feels like it doesn’t quite earn this twist, since there is little done to really work through its implications.

All of this isn’t to say that Glorious is bad. The acting is phenomenal, and the script is often very clever and smart. There are enough good individual moments to make it worthwhile, and the average horror fan will likely have a fun time for most of the film. Unfortunately, these great individual elements never cohere into a larger (glory) whole and they’re bogged down by a bit too much filler. Reimagined as a shorter-form project, Glorious could have a much better chance of living up to its name. As it stands, it’s simply a series of promising moments that never see follow-up, a bunch of filler scenes, and a film that promises an exploration of sexuality that it never even remotely delivers.