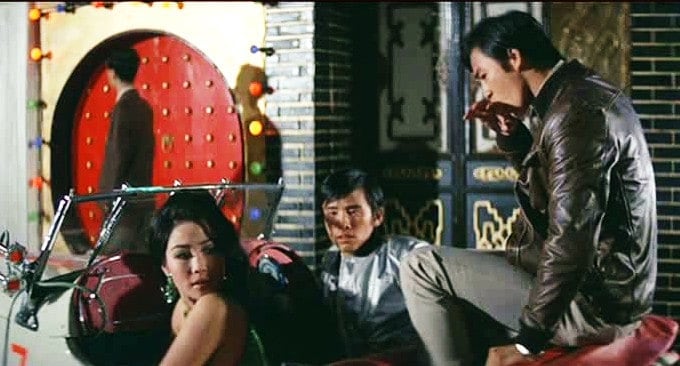 The name Chang Cheh should be recognizable to any self-ascribed Shaw Brothers fan. The man was a true legend within the studio system, directing movies at such a rapid rate that even Woody Allen would blush. With a whopping total of 95 films to his credit as a director, Chang Cheh was a machine, sometimes working on multiple films in quick succession. The are upsides and downsides to such a career. The obvious criticism is that not all of his movies were good. Some were rather petty in fact. That being said, such workmanship definitely helped him become a remarkably creative individual with a voice capable of sharing eclectic stories. Rarely was this more evident than in his 1969 effort, Dead End, which, despite its title suggesting a horror story, is actually a quaint yet emotionally gripping drama about young adult aimlessness?

Ti Lung plays Zhang Chun, a reasonably smart young professional working for a big company in the downtown area. It is a busy building, with many employees hammering away madly at their typewriters. At one point, in an effective silent slow motion shot (a hallmark of the Chang Cheh style of filmmaking), Zhang lays back in his chair and yawns. There is a hint of carelessness in the act, indicative of the type of person he is. While he may earn a living with a respectable job at a respectable employer, he is never going to take such a job too seriously. It simply does not speak to him on a personal level. A greater clue comes in the next scene, wherein Zhang brings along his current girlfriend into the building complex at night after all have gone home. They engage in comedic foreplay before making love on Zhang’s work desk, that is until they are caught by the nightwatchman. Zhang is promptly fired, leaving back in a position he has been in more than once: jobless with nothing better to do than chase girls with his buddy David (David Chiang), with whom he shares one special girl, the beautiful Mary (Angela Yu Chien), the sort of pixie dream girl that really can only exist in the movies. One day, while driving outside the city, Zhang comes across Wen Rou (Li Chung), a shy if an intelligent girl with whom the protagonist will share and ultimately destructive relationship.

Dead End is anything but a compelling, rich drama about wild youth.

Keeping with the trend of recent Shaw Brothers reviews, the last few of which have taken a look at films with less martial arts content and occasionally not even set during the era of the great Chinese dynasties, Dead End is the studio’s version of Rebel Without a Cause, at least in some regard. This does not mean Chang’s film is a remake of the American classic, but it is very much a kindred spirit. Ti Lung plays the James Dean character, only the circumstances here are more pressing. The character of Zhang is, for all intents and purposes, a teenager struggling to find a path in an adult world. He of the age where career is of the utmost importance in the minds and hearts of the majority, but Zhang is not a part of said majority. Is he utterly incapable of fitting into the orthodox way of living as a member of society, or is it a lack of dedication to acquiesce to the standards of the day? As in most cases, the answer is probably ‘A little bit of both.’ He is by nature someone who seeks thrills, sometimes more flamboyant ones, such as going to a night club or a bordello, other times merely riding a beautiful car in the countryside (his friend David works as a mechanic, hence they have access to some stunning vehicles). The main issue plaguing him, if one can even make the case that anything plagues him at all, is his inability to stay dedicated to anything for an extended period of time. On the morning after being fired, David reminds him how he has never succeeded in remaining with a company past the 3 month probation period. Zhang is a free spirit.

What makes this movie, among other things, is the excellent mood set by the director. It is never just a drama, or just a comedy, or just a romance flick. Chang Cheh, proving that he can play with several vastly different tones in one cohesive story, offers viewers a little of all three. As the story evolves and the relationship between Zhang and Wen Rou grows ever more straining, the viewer can feel the palpable emotions burning under surface. Neither is willing to let go of the other, but their future is even more uncertain when others around them, chief among them Rou’s mobster brother Wen Qiang (played by Chen Hung Lieh, one of this fan’s favourite actors ever), clamp down on them for reasons each refuses to accept. This is young adult melodrama, probably not something that sits terribly well with just anybody. That being said, despite its familiarity, Chang Cheh’s telling of this tale expertly creates the feeling of impending doom, all the while keeping the viewer hopeful that perhaps, just perhaps, a great conclusion awaits the two desperate lovers. The film excels at depicting the emotional force of the story. Plot, even though there is one, is not the most important part. Rather, it is the emotions and the struggles they create within and between the characters which make Dead End what it is.

Ti Lung, in only his second big-screen role (his first being Have Sword, Will Travel, another Chang Cheh effort), is excellent in the role of this aimless yet at times extraordinary energetic young man. Even at this early stage in his career, the actor possessed a very good understanding of nuance, balance, and emotional depth. Acting per se in Shaw Brothers films is always a slippery aspect to evaluate. So often it seems as though the mantra on set was ‘the bigger and louder, the better,’ so suddenly witnessing a film in which the performances, in particular from the lead, require more restrain than usual is a breath of fresh air. Throughout his career, Ti Lung frequently demonstrated that he was always a bit more adept at demonstrating a wider range than most of his fellow thespians, arguably one of the other great actors of that age being his co-star in this very film, David Chiang. There are a few scenes when they look as though they are trying to play at something rather than let the emotions of the scene sink in naturally, but for the most part, both male leads are exceptionally good, and in a completely different way than is most often discussed when it comes to Shaw.

The leading ladies are also tremendous. Agenla Yu Chien receives less and less screen time as the story kicks, which is a shame given how marvelously radiant she is the first half as the woman sharing the affections of two men who are both longtime friends. In many ways, her Mary is an extension of the type of individual Zhang is, only that she has somehow come to accept life as it is a bit more readily. As previously stated, this is of course pixie dream girl material, not something one encounters in the real world. Nevertheless, an actress with dependable gravitas is required to make the role interesting, which Angela Yu Chien does perfectly. Li Ching, as Wen Rou, is supposed to be the affection of everyone’s eyes. Her character is a little bit more difficult to decipher for her early reservedness. She comes from a far higher socio-economic class than her new lover, and as such, there is some unease when the two first meet. Their behaviours are not fully compatible, although eventually, Zhang gets through to her, pulling her inexorably towards his heart. At that stage, Li Ching really begins to put on some charm in her performance. Her own struggle as the young woman from a different world who has fallen for what some would describe a beatnik is, as many of the other aspects of the story, somewhat predictable, but one would be hard-pressed to fault the actress for her performance, which is full of heart.

Dead End is a satisfying experience, mostly for the fact that it shows the director and actors involved flexing completely different muscles than they normally do. This is more real, more emotionally driven, and relies less on plotting than the vast majority of other films from the famed studio. Those who appreciate Shaw for what they typically produce could very well be turned off by Dead End, but one should be encouraged to give this little film some time in the spotlight.