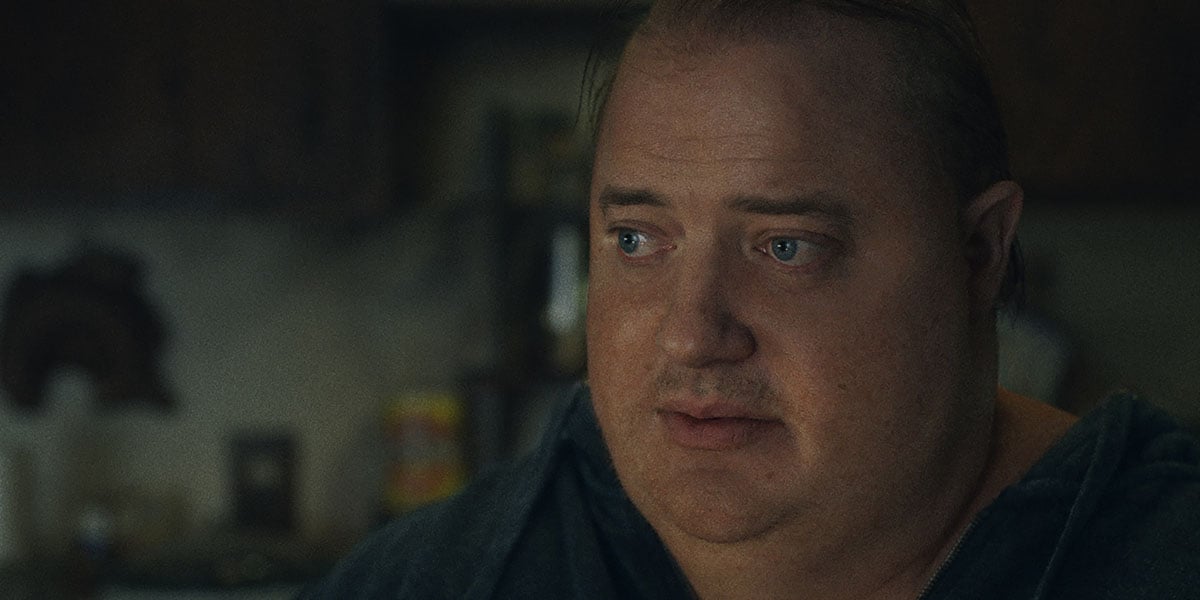 Darren Aronofsky is no stranger to piercing, tragic, and expertly crafted character pieces— look no further than Black Swan and The Wrestler, which balance deft cinematic technique with heartfelt, introspective explorations of their characters’ worlds. Despite the dark and exacting tone of these projects, Aronofsky still manages to tap into a genuine emotional core, which gratifyingly underpins his predisposition for gloom and doom.

The Whale marks yet another foray into the world of harsh and provocative character studies for the filmmaker. But this time around, he distinctly fails to ground it with heart and sincerity. Resulting in a familiar and derivative drama that is utterly too dependent on its enthralling central performance.

The story, adapted from a play of the same name, centers on a week in the life of Charlie (Brendan Fraser), a reclusive English teacher who never turns his camera on, speaking to his students from a black void that pontificates on the importance of writing honestly. The camera is never on because of his crippling obesity, he weighs 600 pounds and the weight is posing a significant threat to his life. His nurse and best friend, Liz (Hong Chau), begs him to check into a hospital but understands that it might be more important to simply offer support.

With time dwindling, Charlie attempts to reconcile with his estranged daughter (Sadie Sink), who is flunking out of high school. She reluctantly agrees to resume a relationship with him on the basis he ghostwrites her school essays. Meanwhile, Charlie is often visited by a door-to-door missionary who engages him in conversations about redemption that resonate, despite him being homosexual and not religiously inclined.

It’s an experience that toys with catharsis but innately lacks the dramatic weight to make its would-be heartfelt confrontations impactful. As we are given more insights into Charlie’s life and familial failings, they reveal themselves as trifles at best, that are easily discernable and lacking in authenticity.

For a film all about honesty, it markedly has none. If only it was imbued with that mindset from its inception, this would have been a completely different experience that might have reached the level of transcendence Brendan Fraser does.

Fraser puts forward one of the best performances of the year and is practically a shoo-in for the Oscars. His performance radiates with both subtlety and grandiosity, seamlessly transitioning between the two, breathing life into Charlie and his struggle to reconcile with his demons and his impending death. Aronofsky is always able to conjure great performances out of his cast, especially his leads—Mickey Rourke (The Wrestler), Natalie Portman (Black Swan), And Jennifer Lawrence (Mother!) all shine and elevate their respective films.

Yet, in The Whale, Fraser’s towering performance takes on the opposite effect. He transcends the film’s bounds, looming over it and further exposing its critical shortcomings. While Fraser is wholly sincere, authentic, and marvelous to behold, the film around him fundamentally isn’t, both literally and figuratively collapsing under his weight, unearthing a shallow and leaden drama that fails to bring the heart a great cinematic experience needs. Solely because of Fraser does this film exude admirability, but even he alone can’t make it one that is deserving of love.

Moonage Daydream is an Ambitious but Flawed Tribute to David Bowie

Holy Spider Tracks a Serial Killer on a Holy Crusade