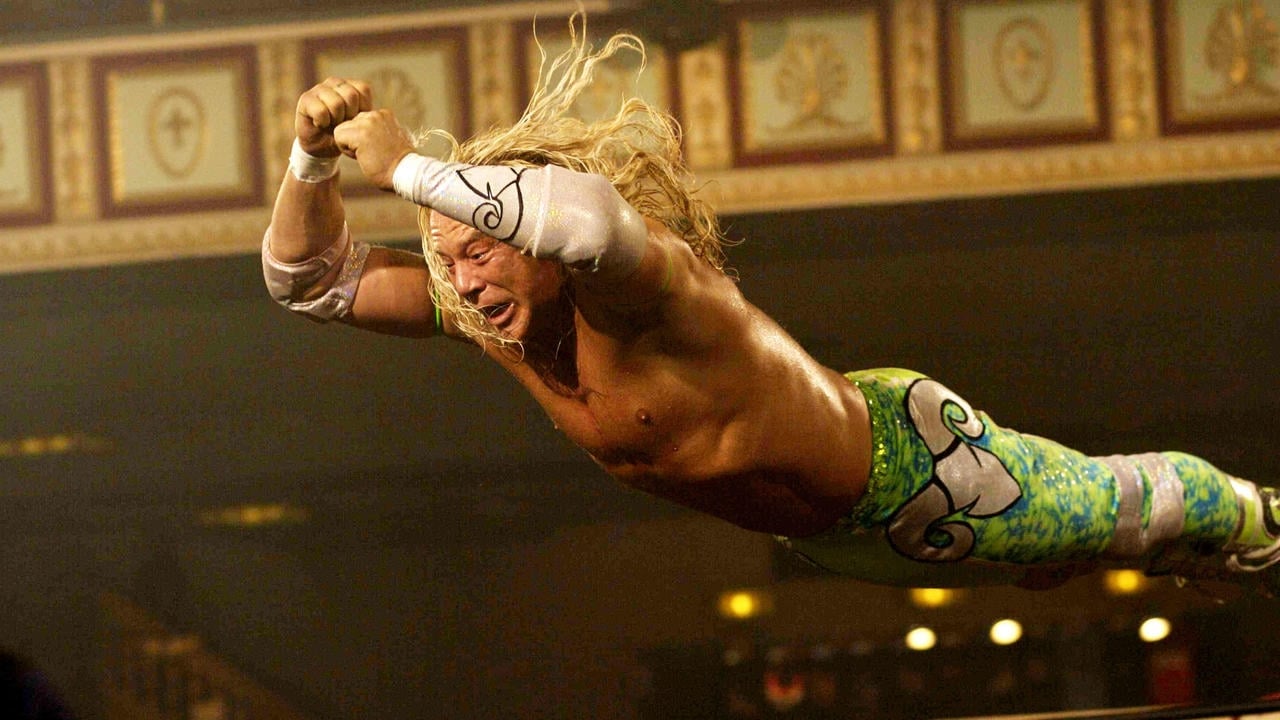 The core idea running through Darren Aronofsky’s filmography is the fragility and impermanence of the human body. In Requiem for a Dream, characters push their bodies to the limit through drugs, eventually losing possession over them, in The Fountain cancer ravages but spirits live on in multiple dimensions, and in The Wrestler, a character makes a living cultivating and challenging his body on a daily basis; the cost, however, is very steep.

Mickey Rourke stars in The Wrestler as Randy, a former Wrestling champ who continues to pursue his passion with gruelling weekend gigs. When it becomes apparent that his health is interfering with his come-back, Randy attempts to reconnect with the relationships he had left behind in the pursuit of his dreams. He strikes up a friendship with a stripper, Cassidy, who is also reaching the end of her career. He also finds his daughter, now a young adult, who wants nothing to do with him since his abandonment. He tries valiantly to make sincere human contact but ultimately falls short.

A life-long pursuit of bodily “perfection” has left Randy emotionally crippled. The pursuit of the impermanent and the shallow has created a spiritual imbalance that he cannot overcome over the course of a few weeks. The physical obsession has focused Randy’s life on an aspect of existence that is shallow, self-centered, and passing. This pursuit has gained him empty pleasure, but now that his body is fading these moments are less satisfying and will eventually run out.

Randy’s failures as a father at this late stage are not for lack of trying. He has mellowed and sincerely desires to rekindle a relationship with his daughter. Her reservations are valid and desperately, he attempts to make up for all the time he lost and wasted. His anxiety is evident, even when he comes up short. His efforts are quite obviously a little too late, not only because their relationship is irreparably damaged, but his habits and attentions are too patterned and he is unable to break the cycle of self-involvement. The brief moments that they are able to share and forget their painful past are heartbreaking and serene, and one wonders why Randy does not try harder to salvage this relationship. It eventually becomes apparent though; it’s not so much an unwillingness as it is an inability to abandon his bodily pursuits.

His relationship with Cassidy is equally tumultuous, despite the fact that Cassidy is reasonable and understanding. Much like him, her body is her career, but she is well aware of the transient nature of a life built on something that once it reaches its peak, begins moving almost immediately towards decay.  She is not mourning this loss but celebrating the freedom that will come with it. Randy should have probably taken the same course, but chooses not to. This eventually alienates Cassidy and destroys their relationship as well.

Coming to terms with the film’s final scene, one wonders if Randy’s desire to pursue sincere human relationships is less a desire to reconnect as it is an attempt to further establish his immortality. There seems to be a point of realization in Randy, that he may be forgotten. His body has thrust him into the spotlight, but once that begins to fade he fears so might he. This interlude in his life is an attempt to forge a new identity, but he cannot meet the call. When given the opportunity to resurrect his career he takes it without hesitation, sacrificing his efforts to become a little more human. Is this acted out of fear or pure ego? Whatever the motive, it leads him further down a path of self-destructive.

The film’s gritty documentary look seems to brown the surroundings. Everything seems to be in a state of decomposition, the film itself embodies the effects of temporality on physical life. Art is life, but even that is not eternal, eventually fading due to exposure, environment, and lapses in memory. As explored in The Fountain, only the power of memory is able to overcome our inevitable fate. All will be lost eventually; it’s a matter of holding on to what is important.

Brawler is one of the Better Boxing Movies