Many years before the Coen Brother’s The Ballad of Buster Scruggs, before No Country for Old Men, Fargo, The Big Lebowski, A Serious Man, and the rest of the Coen’s varied and legendary oeuvre, there was Blood Simple. The directing pair’s 1984 debut is a knotty and nasty little noir exercise stocked with themes and visual motifs that populate the rest of their work. A criminal caper goes awry, the characters have a high mortality rate, and an everyman is overrun by the violence of the world around him (Frances McDormand even stars). And as with many Coen affairs, the proceedings in Blood Simple seem pre-determined, fated by some wry and ironic greater power. The brother’s debut succeeds on its own merits, but also presents a mission statement for their subsequent careers.

Blood Simple is a tightly-wound thriller that follows four players: Julian Marty (Dan Hedaya) is a sleaze-ball bar owner married to Abby (Frances McDormand), Abby cheats on Julian with Ray, a bartender at Julian’s bar, while Julian, disgruntled and ashamed, hires an exceptionally grotesque private investigator named Lorren Visser (a profoundly sweaty, jowly M. Emmet Walsh). Abby and Julian might be sinners, but Blood Simple’s truly original sin comes when Julian enlists Visser in his cause. All the chaos and bloodletting follows from that act, after which Visser complicates things by faking the murder of Abby, killing Julian, and attempting to frame Abby for the killing. Ray assumes Abby did kill Julian, and Abby assumes it was Ray. Misgivings and coincidences give way to a breathtaking finale in which Visser stalks Abby and Ray outside (and then — in the film’s terrifying climax — inside) their apartment. 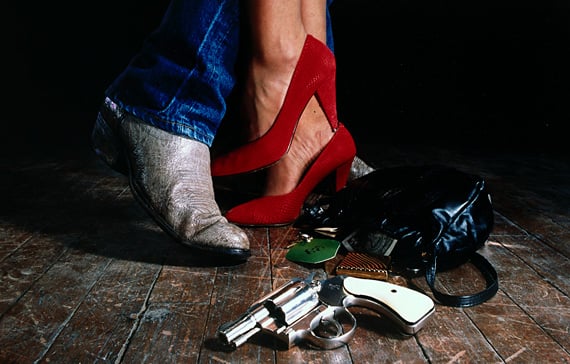 The Coens’ sense of humor is established in Blood Simple, and the film also lays forth fodder for some of the most common Coen criticisms — mainly that their sometimes bleak perspective can cause viewers to come away cold, and that their genre meta-fiddling can erect a distance between the audience and the actual story. Yet, while Blood Simple is indeed filled with mostly unlikable figures (save for Abby, who merely cheated on her horrible husband), and does tangle with noir convention, it stops short of veering for the most congratulatory Coen habits. This is a neo-noir, yes, but Joel and Ethan Coen use their estimable talent to in many ways elevate rather than reconstruct the genre.

The use of light in the climax is a prime example: Ray and Abby must leave the light off so that Visser (behind a sniper rifle) can’t see into their apartment. Abby doesn’t understand what Ray does, and turns the light on. The Coen’s leave the viewers dangling, waiting breathlessly for the inevitable to happen — for Ray to be shot. They make one of the classic subtextual noir filmmaking motifs — the interplay between light and shadow — into the very text itself. But their choice to do so hardly detracts from the suspense, nor (when the bullet finally arrives) the emotional impact. 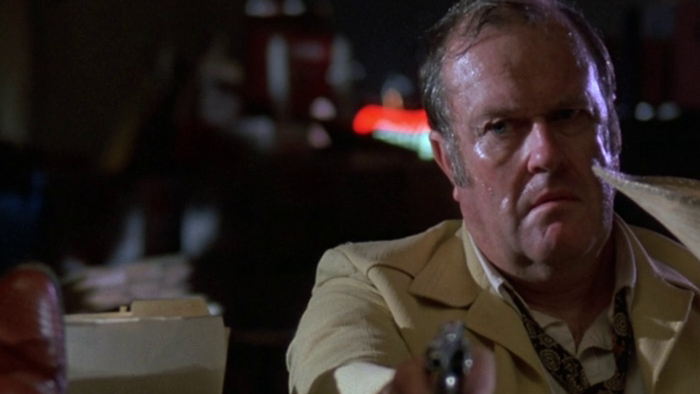 There are plenty of other hints in Blood Simple as to what the Coens would eventually achieve. The sound design is clever and impactful, turning the jolt of a bug zapper or the crash of shattered glass into genuinely jarring effects. The camera, helmed by longtime Coen contributor Barry Sonenfeld, is agile and omnipresent. In one gorgeous and immersive tracking shot, the camera glides across Julian’s bar, dodging a drunk. In another inspired moment, it speeds toward Abby as Julian attempts to kidnap her, presaging the impact that comes when she finally frees herself by kicking him in the balls. Blood Simple‘s austere score underlines this all with a haunting piano melody that is wildly overlooked and underrated — it should be iconic.

Blood Simple received the Criterion treatment a while back, but it’s worth logging into Filmstruck for. The Coen Brother’s first outing provides a lot of the ore which the pair would mine repeatedly throughout the rest of their career, and eventually, they created films that approach perfection. Blood Simple is both too small and too raw to be in that conversation, but it is a massively impressive debut, one made even richer and fulfilling by the careers that followed.

‘The Ballad of Buster Scruggs’ is a Massive Disappointment

The Night of The Hunter: He brought God to the community and terror to an innocent family