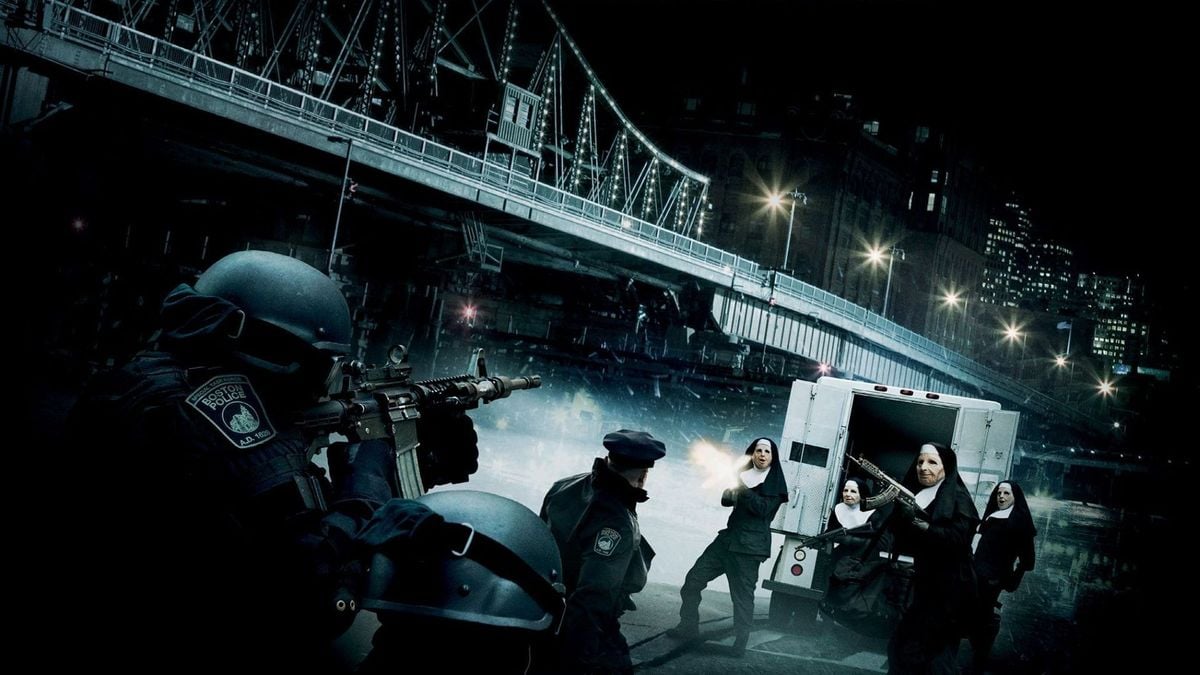 Gutsier and earthier than Clint Eastwood’s more celebrated Mystic River, Ben Affleck’s directorial debut Gone Baby Gone (also a Dennis Lehane adaptation) is not a perfect movie, but it signaled a feasible alternative career path for Ben Affleck, whose onscreen viability was on the decline thanks to a string of less-than-sterling flicks. With The Town, Affleck continued to show off his propensity for working with actors to craft memorable performances, and his gift for putting together films of unflagging momentum remains, but unfortunately it’s all in the service of an extremely familiar crime movie, one whose every beat you’ll likely see coming.

Affleck toplines as Doug MacRay, the leader of a proficient gang of bank robbers operating from Charlestown, Massachusetts known for its alarmingly high number of like-minded crooks. At his side is his loose-cannon best friend James (The Hurt Locker‘s Jeremy Renner), whose sister Krista (Blake Lively) carries a torch for him, even as she runs Oxycontin and trolls for sex at the local watering hole. While carrying out their latest job (evocatively decked out in skull masks), they take a hostage, a skittish bank manager (Rebecca Hall), who James threatens to “take care of” after the heist in order to tie up any possible loose ends, but Doug has other ideas and they wind up becoming romantically involved, much to James’s quite reasonable dismay. On their tail is a relentless FBI agent (Jon Hamm) who’s willing to expose any and all weaknesses in Doug’s existence in order to take down the squad as they prepare to gear up for increasingly more ambitious jobs.

If you need any help guessing how The Town plays out, you’ve probably never seen a crime film before. Back-stabbing, poor decision-making, shootouts, and themes of redemption abound in a fairly standard yarn with few notable twists. Luckily, Affleck has assembled a can’t-miss cast that nevertheless unexpectedly elevates the material. Standouts include Renner’s fire-tongued tough, as well as Pete Postlethwaite in a brief role that exploits his effortless menace, but in a cast filled with obvious talent, the true surprise is Blake Lively, best known from TV’s Gossip Girl, whose simultaneous bruised, street-smart wit and obvious vulnerability combine to make Krista the film’s most memorable character despite her minimal screentime. Affleck is fine, but shows evidence of vanity in a sequence that shows off his elaborate musculature, as well as a tremendous litany of closeups. Finally, Jon Hamm is able to shake off the specter of Don Draper as the dogged fed by playing him as a man who’s good at his job rather than a cartoonishly righteous lawman.

For all of the fine work being done on screen, and for all the cute directorial flourishes (particularly the minute attention to detail before, during, and after the film’s three heists), The Town remains a frustratingly pat experience, lazily trading in rote plot twists and lazy sentimentality where Gone Baby Gone often felt unexpectedly raw and unpredictable. The characters click but feel hopelessly tethered to a narrative whose structure and shape we know all too well. The actors and their creations make The Town worth seeing, but they – and we – deserve better.

25 years later: The Rock was the Most Enjoyable Action Movie of the ’90s