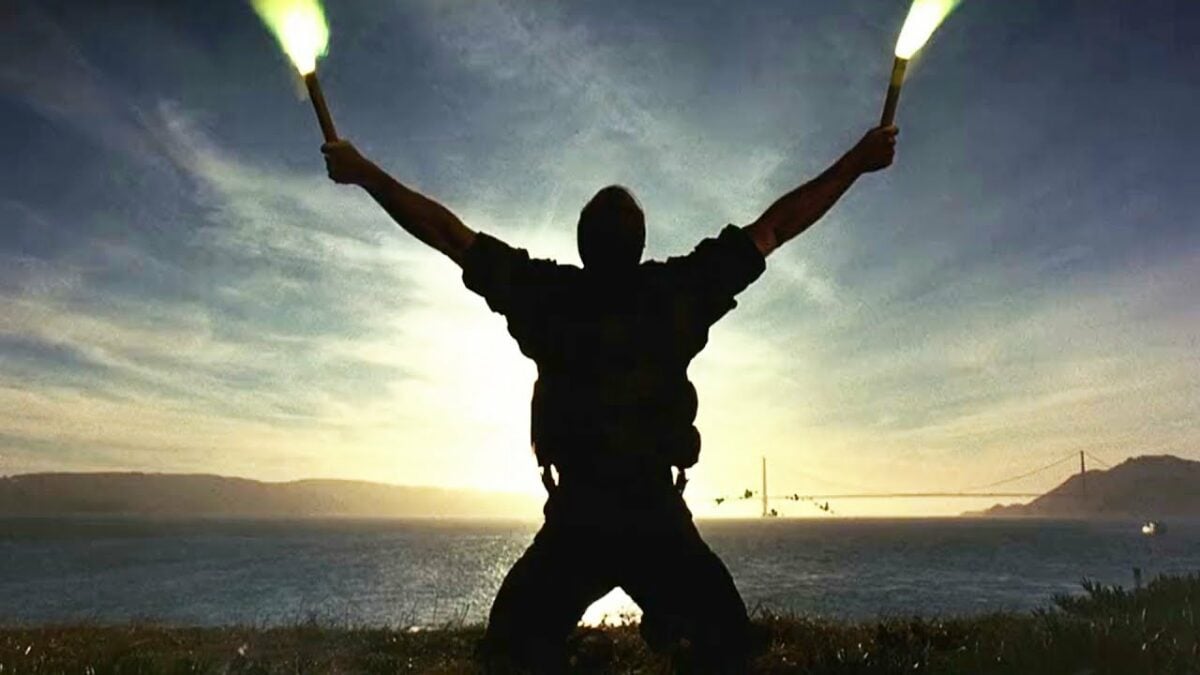 The formula of testosterone-inflected, high-concept action-adventure synonymous with producers Don Simpson and Jerry Bruckheimer was executed to near-perfection in 1996 with The Rock, an action movie that did everything right. The film, which came out in June of 1996- 25 years ago this week – has been a cable TV staple ever since.

It has a great concept and outstanding action. It put together a lead acting duo of Nicolas Cage and Sean Connery, which was totally counterintuitive but absolutely worked. It has a great villain (Ed Harris) who actually has a good point. It is also consistently funny, with a long list of memorable one-liners. Overall, The Rock was the most enjoyable, and the most rewatchable, action blockbuster of the 1990s.

Bruckheimer and Simpson – the latter of whom died six months before the film’s release, making it his last – were all about the high concept, and The Rock certainly has one.

Francis X. Hummel (Harris) is a decorated general, one upset that the government has failed to acknowledge or provide benefits to his men who died on covert missions. So he recruits a group of mercenaries, steals canisters of dangerous VX gas, and commandeers Alcatraz, threatening to gas the population of San Francisco unless his demands for $100 million are met.

The government’s reaction is to send a team that includes Stanley Goodspeed (Cage), a nerdish chemical weapons expert who looks like he’s never shot a gun in his life. Also on the mission is John Mason (Connery), a British secret agent who stole all of the nation’s secrets and has been held in prison secretly for the past 30 years, but knows his way into Alcatraz because he once escaped.

When everyone but the two of them is killed, Cage and Connery are left to bicker their way through a confrontation on the famous prison island with these tough military veterans.

The banter between Cage and Connery is consistently hilarious, with Connery, who was 66 at the time of the film’s release, getting in some light mockery of his 007 past. As for Cage, The Rock, which came the year after his Oscar for Leaving Las Vegas, was near the beginning of his penchant for luxurious overacting.

There’s also a deep supporting cast, including the late John Spencer as the FBI director, William Forsythe as an FBI agent, and David Morse, Tony Todd, and Bokeem Woodbine as members of the mercenary team.

And those lines- “I’d take pleasure in guttin’ you, boy,” “winners go home and fuck the prom queen,” “How in the name of Zeus’s BUTT HOLE did you get out of your cell?” Every time I’ve been in San Francisco since 1996, I’ve quoted The Rock constantly. Who wrote those lines, and the script itself is a matter of some dispute;  David Weisberg and Douglas Cook wrote it originally, writers including Jonathan Hensleigh, Quentin Tarantino, and Aaron Sorkin worked on it, and after a long Writers Guild arbitration, Mark Rosner’s name was added to the list of credited writers.

The Rock even helped get us to war less than a decade later. In the run-up to the Iraq War, a British intelligence source described Saddam Hussein’s nonexistent weapons programs in a way that seemed inspired by the appearance of the VX gas in The Rock instead of how they actually work in real life. What was good enough for Don Simpson and Jerry Bruckheimer, it would appear, was also good enough for George W. Bush and Tony Blair.

A lot of film critics, myself included, have a visceral dislike of the work of Michael Bay, and all that it represents. But many of us have to acknowledge that back at the beginning of his career, with The Rock, Bay made a nearly-perfect action movie.

Ben Affleck’s The Town is a Frustratingly Pat Experience