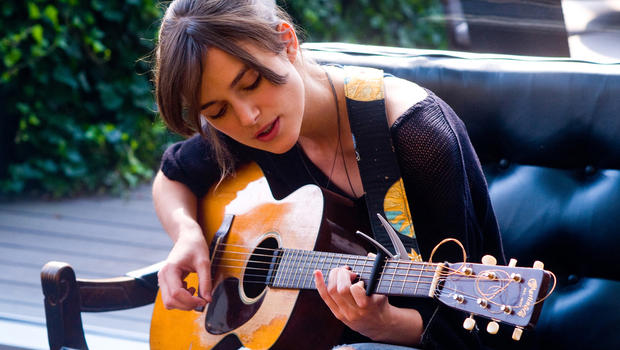 Movies that make you feel good on their own terms are a rare breed.  John Carney’s latest film, Begin Again, doesn’t need to pander or lobotomize itself to entertain you.  It doesn’t need villains twirling their mustache or hysterical spouses throwing plates against the wall to build drama.  It doesn’t even need wacky sight gags or hipster irony to make you laugh.  All it needs are nuanced characters trying to survive while still maintaining some measure of dignity.  Oh… and a few groovy tunes that get stuck in your head.

Begin Again follows two damaged people who form one of those sticky relationships that defy description.  Yes, Dan (Mark Ruffalo) is a downtrodden record executive who recognizes the untapped musical potential in Greta (Keira Knightley), but they’re much more than business partners.  While there are certainly romantic sparks between them (including the impromptu dance montage that is mandatory for all indie-romances these days), their connection isn’t based on physical attraction.  They need each other but both are leery of a deeper commitment.  It’s the kind of complicated “real life” relationship that modern filmmakers seem reluctant to tackle.  Luckily, writer-director, John Carney, has mastered the filmmaking intricacies of this delicate balancing act.

Carney starts by writing multi-dimensional supporting characters to populate his story.  They aren’t simply waiting in the wings for their chance to help or harm the main characters; they exist beyond the screen.  When Dave (Adam Levine) jolts Greta for another woman, it’s not out of malice, but an inability to navigate his newfound superstardom.  Greta’s best friend, Steve (James Corden), is more than comic relief; he has his own dreams and skillset that insinuate themselves into the storyline.  For Greta, who suddenly finds herself alone and adrift in the Big City, every decision is critical to the direction of her life.  Carney takes this responsibility seriously, never settling for cliché or melodrama to move the story forward.

Likewise, Dan’s life isn’t crumbling out of narrative necessity.  His estranged wife, Miriam (Catherine Keener), and his standoffish daughter, Violet (Hailee Steinfeld), don’t exist to punish him.  They have their own agendas, coupled with a justified pessimism about Dan’s future prospects.  When Dan is fired from his record company—a company which he co-founded—it isn’t just to intensify his desperation; it’s the result of his poor decisions.  Instead of dedicating the required hard work, both to his family and his livelihood, Dan settles for trying to catch lightning in a bottle.  The problem, of course, is that after the lightning has passed, all you’re left with is the storm.

And so Greta and Dan, already in the midst of personal crises, find themselves thrust together by fate instead of an overbearing screenwriter.  Taking the time to develop their backstory and challenging them at every turn raises the emotional stakes for the entire film.  Now, when Greta sings from the heart, it resonates with her heartache.  When Dan hides his feelings from Greta or his family, we feel the little death that comes from his self-alienation.  This makes each conversation and song feel satisfying, even when we desperately want these characters to make better decisions.

That these decisions rarely follow convention is a credit to Carney’s confidence in his cast of actors.  Knightley handles her role with just the right mix of pluck and vulnerability.  When Dan approaches her with a record deal, she bulks at his initial advances.  Greta may be damaged but she’s no wilting flower.  True, Knightley’s singing voice isn’t the strongest—she’s more breathy wisp than commanding croon—but she delivers each song with the required emotional intensity.  Likewise, Ruffalo is his ever-reliable self.  The remarkable thing about Dan’s character is that, despite his own desperation, he never sinks to taking advantage of Greta’s desperation.  Very few actors can play that note as well as Ruffalo; the would-be lothario who refuses to manipulate people with his considerable charm.  Watching Knightley and Ruffalo in the service of such a genuine story is a sublime pleasure.

Carney’s direction is equally assured to his writing.  Each song is lovingly crafted (by Gregg Alexander and a stable of songwriters) to serve as an emotional punctuation mark for the proceeding scene.  The tone is lively throughout, with the story moving at a brisk pace that never feels rushed.  Production numbers never overstay their welcome, quickly delivering the goods before taking an abbreviated bow and pushing forward.  Carney takes advantage of the ultimate stage, New York City, to inform many of the songs, as well.  He understands that music becomes the soundtrack for everything around it, no matter how mundane or innocuous.  This lends an intoxicating sense of setting to every musical number; place and sound become hopelessly inseparable.

Begin Again is an unabashed crowd-pleaser that delivers on every level.  The story is immaculately constructed, populated by interesting characters and tremendous musical numbers.  It’s heartfelt without being overbearing; comfortable without being predictable.  In other words, this is the perfect way to spend a hot summer night with the one you love.

Remembering Glen Hansard and Markéta Irglová from Once