With All About My Mother, Pedro Almodovar shifts away from his earlier, more kinky and offbeat views of sex and relationships. Here, he is more concerned about conventional film elements and less determined to shock his viewers.

The hit of the 1999 Cannes Film Festival, where everyone except the jury thought it should have won the Palme d’Or, All About My Mother is about mothers and their relationships with their natural or surrogate children. It’s also about the other roles that women occupy when they’re not caring for their sons and daughters. In its closing credits Almodovar goes so far as to dedicate the film to all actresses who have played actresses, to all women who act, to men who act and become women, to all the people who want to be mothers, and finally to his own mother. For Almodovar, the great actresses and the characters they played help us in preparing for the tragedies in life just like mothers do. For Almodóvar, women must be actresses in their own lives in order to get by. In fact, there are no significant male characters in the film. Instead, we have Transvestite prostitutes, wayward nuns, and runaway mothers who are all filtered through and enlarged by Almodovar’s female-identified sensibility. In other hands, these characters might be candidates for The Jerry Springer Show, but here they are handled with utmost sympathy. This heartwarming, humanist and gender-blurring pic about life imitating art imitating life could possibly be the director’s most accomplished work.

At the center of the film is Manuela (Cecilia Roth) a mother three times over – first to her biological child, Esteban, then to Rosa (Penelope Cruz), whom she takes into her home, and finally to a baby who comes into her custody. But Manuela is not the only mother in the film. Huma (Marisa Paredes) is a mother-figure to her much younger lover, Nina (Candela Peña), and Rosa is expecting a baby. All these women have nurturing sides and instincts, but none are as committed as Manuela who spends her time finding ways to fill the void that her son’s death has left. For Almodóvar, the glory of women, and also the source of their tragedy, is their horror of being alone, and what they do to avoid it.

All About My Mother is missing the humour we are accustomed to seeing in most of Almodovar’s previous films but the picture still has its lighter moments. Antonia San Juan steals every scene as Agrado, a former truck driver now prostitute who traded in his truck for a pair of tits. Agrado gets most of the movie’s best lines: “All I have that’s real are my feelings, and those pints of silicone that weigh a ton.” or “…nothing like a Chanel to make you feel respectable.” Agrado is perhaps the secret ingredient of the film, giving the audience a breath of fresh air amidst the tragedies which unfold.

Almodovar carefully juggles heavy issues blending the scenes together without making it over dramatic or gritty. He keeps his storyline fresh and effectively paced and despite all the topics and unordinary characters, All About My Mother never feels scandalous. The tone of the film wears its heart on its sleeve similar to a soap opera, but it’s always sincere and by no means camp.

From a visual standpoint, the film bears the director’s trademark. The presentation is as bright, glossy and seductive as a fashion magazine. Lensed by Affonso Beato, the film is staggeringly beautiful to look at and always arranged in interesting patterns. Filmed in Barcelona, it uses the city’s mosaic columns and surrounding cathedrals to grand effect. There are also a number of striking images, including that of a train racing through a tunnel and Manuela standing in front of a giant billboard image of Huma’s face. Almodovar likes to break cinematic rules and the detailed lensing sometimes works, as when we see Esteban’s death from his point of view. 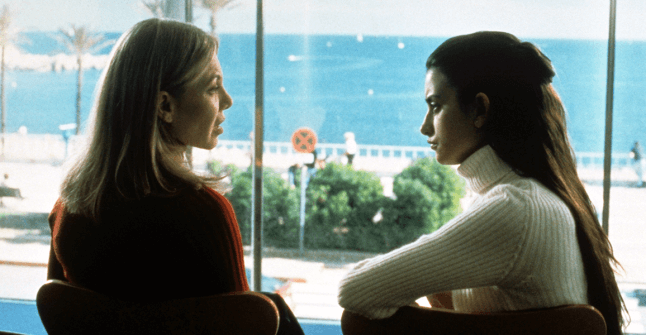 Thematically, Almodovar alludes to both A Streetcar Named Desire and All About Eve on multiple occasions. The film is studded with cultural references that place it within the tradition of ’50s melodrama. Almodovar also pays homage in a scene lifted from John Cassavetes’ Opening Night involving a car accident earlier in the film. Another Highlight of the film sees Rosa encountering her Alzheimer’s-addled father out on the street walking the family dog. The dog remembers her, but the father doesn’t, and the devastating yet accepting look on her face tells you more about the character than any line of dialogue ever could.

All About My Mother is one of Pedro Almodovar’s three masterpieces. The director weaves together an extremely enjoyable, well acted magnificent tapestry with a wink to classics of theater and cinema. Mother is a poignant story of love, loss, and compassion and although Manuela never gets over her son’s death, Almodóvar does crown her maternal sorrow with a climactic miracle.

Sundance 2017: ‘I Don’t Feel at Home in This World Anymore’ is Better Living Through Vengeance

‘Silence’ is a Haunting Look at the Struggle of Faith