Connect with us
'Silence' is a haunting look at the struggle of religious conviction and the price of martyrdom.

In its journey through underground Catholicism in 17th century Japan, Martin Scorsese’s Silence covers a lot of lush, misty ground, wafting through questions of doubt and morality versus faith with meditative patience. While the allusions to the one-sided communication inherent in religion may occasionally feel like familiar philosophical territory, a rarer look at the mentality and repercussions of martyrdom proves powerful and fascinating, turning the story about two Jesuit priests on a mission to reclaim one of their own into a thoughtful and moving exploration of the struggles true believers face both outward and in. 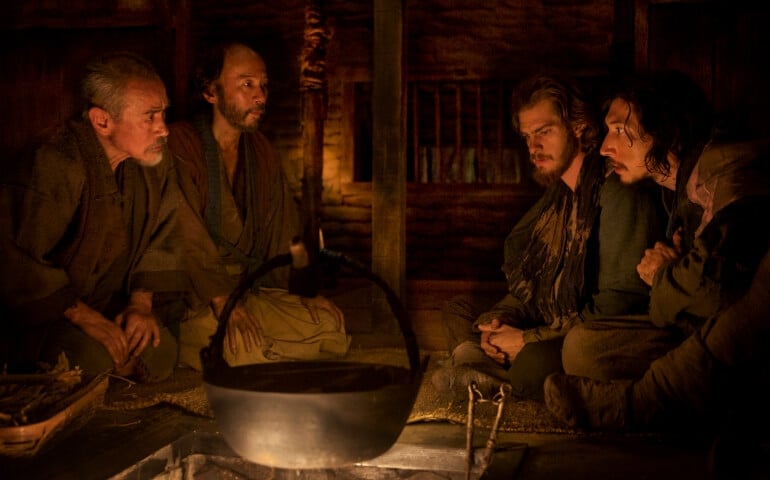 In disbelief at the news that their mentor, Father Cristóvão Ferreira (Liam Neeson), has publicly renounced Christianity after enduring torture at the hands of a shogunate out to dispel Western religion from the entirety of Japan, Portuguese Fathers Sebastião Rodrigues and Francisco Garupe (Andrew Garfield and Adam Driver, respectively) request the opportunity to travel abroad and track down the fallen clergyman, hopeful to discover the truth behind his grave apostasy. Upon being smuggled into country, the two men witness firsthand the severity of the situation for the remaining native Catholics, with villagers forced to gather in secret lest they be subject to harsh penalties, including death. Administering mass, possessing items with Christian symbols, and particularly their two new “padres” being seen in the open could bring the wrath of the “inquisitor” down on these devout peasants, but in this poor flock that needs tending Rodrigues sees the great test he has yearned for, and he is determined to serve God by filling their needs, even if it means sacrificing his own life in the process.

Be careful what you wish for. Rodrigues would gladly give up everything for his faith, but are those convictions strong enough to allow others to perish, especially when his own denials could save them? It’s one thing to risk his own soul, but what of those that he is supposed to shepherd, to protect — can he let them pay the ultimate price, perhaps not truly understanding why? Or is his piety merely pride? Answers do not come easy in Silence, if at all. Prayers sent to heaven evaporate like radio waves into space, never to get a response, leaving the human to anguish over their festering sore as the pain it causes only intensifies. If God exists, why doesn’t he stop such misery? How can he respond to countless desperate cries with such indifference? The logic in doubt is tempting, sure, if narrowly-focused, and therein lies Rodrigues’ desired battle. The bible speaks of no greater love than that of giving up one’s life for one’s friends, but perhaps the interpretation of what that means can vary. For a compassionate and dutiful man, there are more painful ways to suffer than mere physical persecution.

Silence is full of torment of all kinds, but Scorsese has adopted a calm approach, contemplating scenes of both agony and ritualistic ecstasy with the impassive deliberation of a priest intoning the brutal stages of The Passion. He holds his shots longer than most audiences will perhaps be used to, a tact that often elicits more discomfort than the cruelty onscreen. Though violence is sometimes shocking and very affecting, the smoky, incense-filled atmosphere permeating the proceedings keeps any punctuation somewhat otherworldy and at a distance, intertwining the spiritual stakes with those of the flesh in a way that keeps the audience focused on what’s really important. Attacks do not always come from the sword, however, and reason is not left out of the equation either. A holy man must face a tempter, someone who appeals to his more rational side, and so Silence has a frighteningly pragmatic governor, Inoue Masashige (a serpentine Issey Ogata), countering missionary idealism with his own convincing logic. Though his debates with Rodrigues over the impenetrable “swamp” that Japan is to outside ideas occasionally borders on a levity not entirely in step with the rest of the film’s solemnity, the banter and symbolism of these face-offs is so delightful that they serve as welcome interludes to the foreboding in the air.

Absorbing visuals enhance the gloomy mood through a muted color palette and frank compositions that don’t distract with Scorsese’s normally stylish auteurism. The misty mountain firs and craggy beaches seem a cold place to a religion often practiced in warm candle light, and despite the life of belief in their eyes, the closeups of the weathered faces of the Japanese villagers portray the burdensome consequences of stubborn resistance. Restraint and reverence go hand in hand, and Scorsese clearly has enough respect for the material to abstain from overly adorning it. His actors follow suit, often maintaining a subdued, level-headed facade, but skillful performances from Neeson and an underused Driver deliver brief, thrilling moments when small cracks expose what’s really in their hearts.

Eventually Silence comes down to the nature of the trial that the young Rodrigues, perhaps without fully appreciating all that proving oneself can entail, has coveted so much. Garfield is up to the task of teetering between belief and doubt, as his faith is forced to withstand assault from all sides without the slightest support from the one he fights for. The choices made along the way and up to the end are haunting and ripe for reflection, thick with the sort of guilt and internal struggle Catholics will recognize, and with which anyone who has ever been faced with the heart-rending prospect of compromising their deeply-cherished principles can sympathize.

‘All About My Mother’ – One of Pedro Almodovar’s Three Masterpieces

Ip Man 2 – Dynamic, Relentless and Funnier than its Predecessor