Connect with us
Macon Blair's film works as both a dark comedy and tense thriller, as terrifying at times as it is hilarious.

Macon Blair gave an incredible performance in Blue Ruin, a violent little film from Jeremy Saulnier that became my favorite film of 2014. He reteamed with Saulnier for last year’s violent Green Room, which also became my favorite film of the year. Now he’s stepped behind the camera with I Don’t Feel at Home in This World Anymore, and it’s a solid debut from Blair, a shockingly violent and bizarrely hilarious work. Despite sharing complimentary similarities to the work he did with Saulnier, Anymore still comes out feeling like Blair’s film. The story involves Ruth (Melanie Lynskey), a disillusioned woman whose home gets burglarized. She teams with her metalhead neighbor Tony (Elijah Wood) in tracking down the criminals, gaining a renewed sense of purpose while tumbling into an underworld that is out of her depth.

It’s clear that Blair learned some valuable lessons from Saulnier; there’s a reason they work together frequently, and Saulnier’s presence is felt in the construction of the film. Blair manages to similarly tell story points visually and create seething tension through character, as each feels human regardless of their choices or antics. He is similarly concerned with characters involved in violent situations that they aren’t equipped for at all. Sometimes this confrontation yields results tragic and terrifying, and sometimes there’s a humor to be found in it.

Blair oscillates between two moods throughout I Don’t Feel at Home in This World Anymore: a dark comedy, as Ruth and Tony stumble through botched attempts at confronting the criminals, and a violent and tense thriller, as we get to know the criminals and the world they inhabit. Blair manages to marry the two in the final act, making sequences and instances as terrifying as they are hilarious. The violence is shocking, on par with Saulnier’s in its ability to make you recoil and involuntarily vomit. Yet it’s also hilarious, an irreverence to it all. It would be slapstick if it didn’t feel so immediate. Blair shows he’s got a terrific sense of humor, and knows how to execute those moments. He enlists the talent of cinematographer Larkin Seiple to deliver a grimy, grounded look to much of the film, particularly the scenes of violence. There’s an assuredness in the look and pacing of the film, with the images from Blair and Seiple feeling concentrated in manners that enhance the tension, both comedically and dramatically. 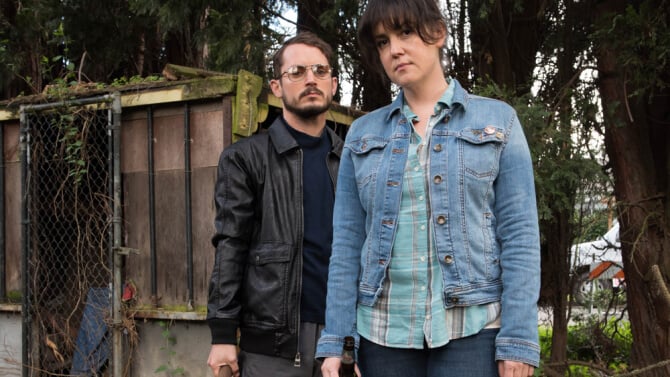 The cast is terrific all around. Melanie Lynskey manages to make frustration with society as a whole comedic in moments, but there’s always a humility about Lynskey’s performances that keeps the insanity of Ruth’s journey grounded. Lynskey always manages to make me feel like I know her characters like they are relatives; it’s one of her greatest gifts, and it goes a long way in grounding Ruth through all these events she loses control over. Elijah Wood is largely comedic relief and pulls it off, a horrible rat-tail hanging off the back of his head for effect. There are certainly moments that feel like they’re trying too hard, as if they’re going “hey, how about this wacky guy, huh?” but for the most part Wood gets to flex his comedic chops ably through his inherent awkwardness. There are certain scenes where his obsession with Japanese weapons pay off in moments that had the audience bursting with joyous laughter.

The performances by the criminals are also quite astounding. They have less scenes than our main duo, yet feel just as complete as characters and humans, if not more. Played by David Yow, Jane Levy and Devon Graye, they’re just utterly captivating scene by scene. They are each menacing in their own way, but Blair and this cast keep them human through all of it. You feel for them, even as they commit shocking, repulsive acts against other people. You’re continually terrified of them, but they still are human after all. There’s a significant amount of death in this film, yet you feel the loss of life no matter who is receiving their end.

The thing that sticks with me after I Don’t Feel at Home in This World Anymore is how much humanity managed to make its way into this dark, irreverent and twisted film. There’s a positivity that manages to peek its way through the grime and the gore at the conclusion that was much needed. The world is terrible, and there’s not much we can do about it, but we can be with each other through it all. I already knew Macon Blair was a terrific actor, but he also shows a lot of promise behind the camera as well. Here’s hoping we get to see more films written and directed by him.

Sundance 2017: ‘Lady Macbeth’ – Too Sleazy to be Classy, Too Classy to be Sleazy

‘All About My Mother’ – One of Pedro Almodovar’s Three Masterpieces