Connect with us
It’s a conflict as old as they come. Sleaze is inherently unclassy, and class is inherently unsleazy. In William Oldroyd’s directorial debut, Katherine (Florence Pugh) is a bride sold into marriage to an unloving, cruel husband in 19th century England.

“What is sleazy cannot be classy, and what is classy cannot be sleazy.”- The Book of De Palma 6:9.

It’s a conflict as old as they come. Sleaze is inherently unclassy, and class is inherently unsleazy. In William Oldroyd’s directorial debut,Lady Macbeth, Katherine (Florence Pugh) is a bride sold into marriage to an unloving, cruel husband in 19th century England. She strikes up an affair with a local farm hand, Sebastian (Cosmo Jarvis), igniting a string of scandal and murder that the pair commit in order to be together. Think Basic Instinct but in Victorian times, yet it’s not quite as interesting as that sounds. Or think Lady Chatterley’s Lover, but with a bunch of murder too. Lady Macbeth is sadly still not as interesting as that sounds. There’s just something about the time period on film that negates all forms of sleaze, no matter how hard it wants to be there.

The film wants to be a distinguished costume drama, but its story and material are inherently dirty. It can never quite marry the two, though it does come close in the third act. It may not have run into this problem if it didn’t spent so much of its first half dignifying itself. There are extravagant costumes, lived-in settings, and courtly dialogue. Once the affair kicks in, there is a ton of sex, scandal and murder. Oldroyd doesn’t embrace how juicy it all is enough for it to be prime sleaze, and thus ends up undermining both the classy and sleazy angles of Lady Macbeth. It’s ambitious, yet not ambitious enough. 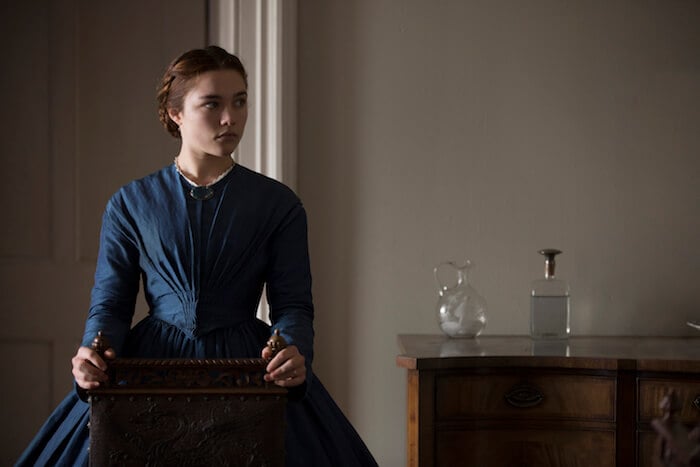 Florence Pugh is quite magnificent in the lead role. She doesn’t say much as Katherine, but she doesn’t necessarily have to. Pugh gives you enough in her subtle expressions and mannerisms to clue you in on what’s going through Katherine’s head. When she does speak, it’s with a hypnotic authority; there’s a reason she gets Sebastian and others tied up in her bidding. You’re tuned into her every step of the way through Pugh’s glances and sighs, and even the way she breathes seems to indicate something about her character. The way Katherine navigates through all the murder and scandal is captivating in Pugh’s hands. What originally start as crimes driven by passion seem to morph into crimes driven by some newfound sense of vanity in Katherine. Watching Pugh embody that transformation is really something. Pugh stood out a few years ago in the beguiling little film The Falling, and it’s nice to see her taking command of a lead role.

The photography by Ari Wegner is stunning, taking arresting use of candlelight and other forms of natural lighting. There’s an overcast that hangs over the setting, the landscapes are wondrous and mystifying. In addition to Pugh, the work by Wegner really does the heavy lifting for Oldroyd. There are opportunities for the film to explore interesting avenues of the intersection of race, gender, feminism and class, but it never really seems interested enough.

There is something gripping about the whole mismatch of tones though. They never coalesce, but the way the two ideals clash is highly watchable. It’s this strange middle ground that never seems to settle. Not enough has happened in Lady Macbeth for it to earn the ambiguity of its ending, but Pugh makes the preceding events worthwhile. Listen, maybe one day we can have a film that wins Oscars and plays on Cinemax at 2 am, but Lady Macbeth just isn’t that film. One day we will see that glorious work — it’s just not this day.

Sundance 2017: ‘I Don’t Feel at Home in This World Anymore’ is Better Living Through Vengeance