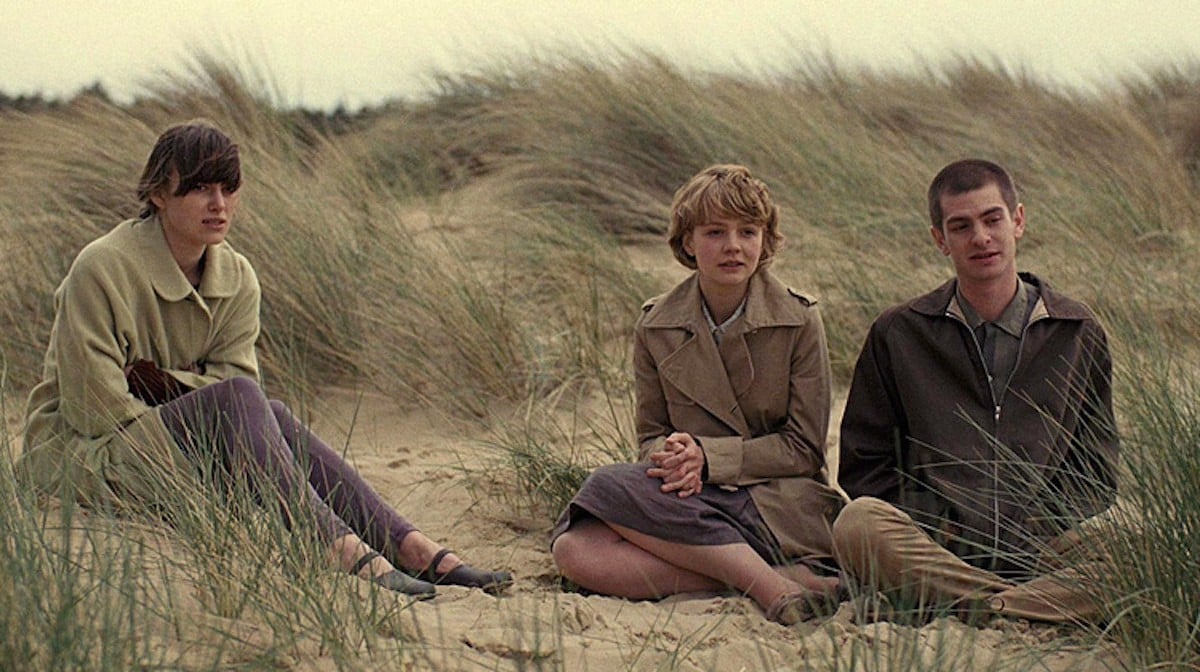 Welcome to Hailsham. The students have everything they need, except time.

When music video directors make the move to feature-film directing, accusations of “style before substance” arise almost as a critical reflex, even in cases where it’s not entirely merited. In Mark Romanek’s One Hour Photo, the director’s elaborate visual style and chilly sense of distance from the material might have seemed needlessly affected to some, but it actually bolstered the film’s feeling of isolation, and its winning central performance from an unusually sharp Robin Williams. The same harmonious match of tone and material doesn’t apply to his long-awaited second feature Never Let Me Go, derived from Kazuo Ishiguro’s acclaimed novel of the same name.

Adapted for the screen by frequent Danny Boyle collaborator Alex Garland, the film opens (after a brief scene considerably later) in 1978 at a seemingly average private school somewhere in Britain, wherein the children are kept under strict supervision (especially from headmaster Charlotte Rampling). Gradually, signs of abnormality crop up, from the electronic monitoring devices on every child’s arm to the outlandish rumors of doom for anyone who strays off school property. Of the students, we exclusively follow three: shy, caring Kathy (Izzy Mikle-Small; later, and principally, Carey Mulligan); mercurial and frail Tommy (Charlie Rowe; Andrew Garfield) and conniving, needy Ruth (Ella Purnell; Keira Knightley). As a tentative love triangle forms, with the eternally crestfallen Kathy seemingly destined to lose out against the more assertive Ruth for Tommy’s attention, the truth about the nature of the institution is brusquely revealed when a sensitive new “Guardian” (Sally Hawkins, naturally) decides she can no longer accept the students’ carefully managed ignorance abut their existence.

This information – kept secret in the film’s trailers – should imbue the film and its characters with disparate, extreme emotional energy, but curiously, Never Let Me Go only has one setting: sad contemplation. Thanks in large part to Mulligan’s incredibly sympathetic presence (as well as a very well-cast Knightley, exploiting her subtly aggressive features), Romanek certainly has no difficulty exploiting the scenario’s many, many crushing beats, but before long the one-note treatment grows tiresome. Bound together in muted shades of gray and green, and frequently given to wide exterior shots, Romanek’s visuals complement the gloom, but Rachel Portman’s score too strongly underlines the emotional intensity of scenes whose content provide more than enough tearjerking fodder. Though much of the film’s mournful final act is well-executed, in large thanks to the uniformly strong cast, Mulligan’s closing narration – much as it was in An Education – is shockingly pat, putting far too fine a point on a narrative that until that point had largely stayed away from clumsy sermonizing.

Never Let Me Go ultimately feels like a noble misfire.

The aforementioned premise that drives the film has its own logical issues. The idea that these individuals, who are eventually permitted to interact with the outside world, would largely accept their fate as glorified cadavers whose lifespans will be seriously cut short without serious protest or anger is simply untenable. They are not kept in strict isolation; they see and speak to individuals who are much older than they will ever be, even half-heartedly attempting to track down the “originals” from whom they were (presumably) cloned. They demonstrate class awareness and a sense of injustice in determining that those “originals” were likely junkies and whores. In a scenario where the children are kept completely in the dark for the duration of their existence, the premise might hold water, but once Hawkins’ “Guardian” spills the beans, much of what follows requires an unnecessarily extreme suspension of disbelief.

Fans of Ishiguro’s novel will doubtless want to see how the beloved tome was translated for the screen, and will perhaps enjoy an enhanced appreciation of its emotionally charged content, but Never Let Me Go ultimately feels like a noble misfire. A more fleet-footed director – like Garland’s usual partner Boyle – might have been able to trespass some of the more egregious plot holes, but Romanek is seemingly content to milk the premise for sometimes-affecting, sometimes-forced misery where it should have inspired something considerably more dynamic.

What Makes A Classic Movie Classic?

10 Years Later: The American and Visions of Damnation