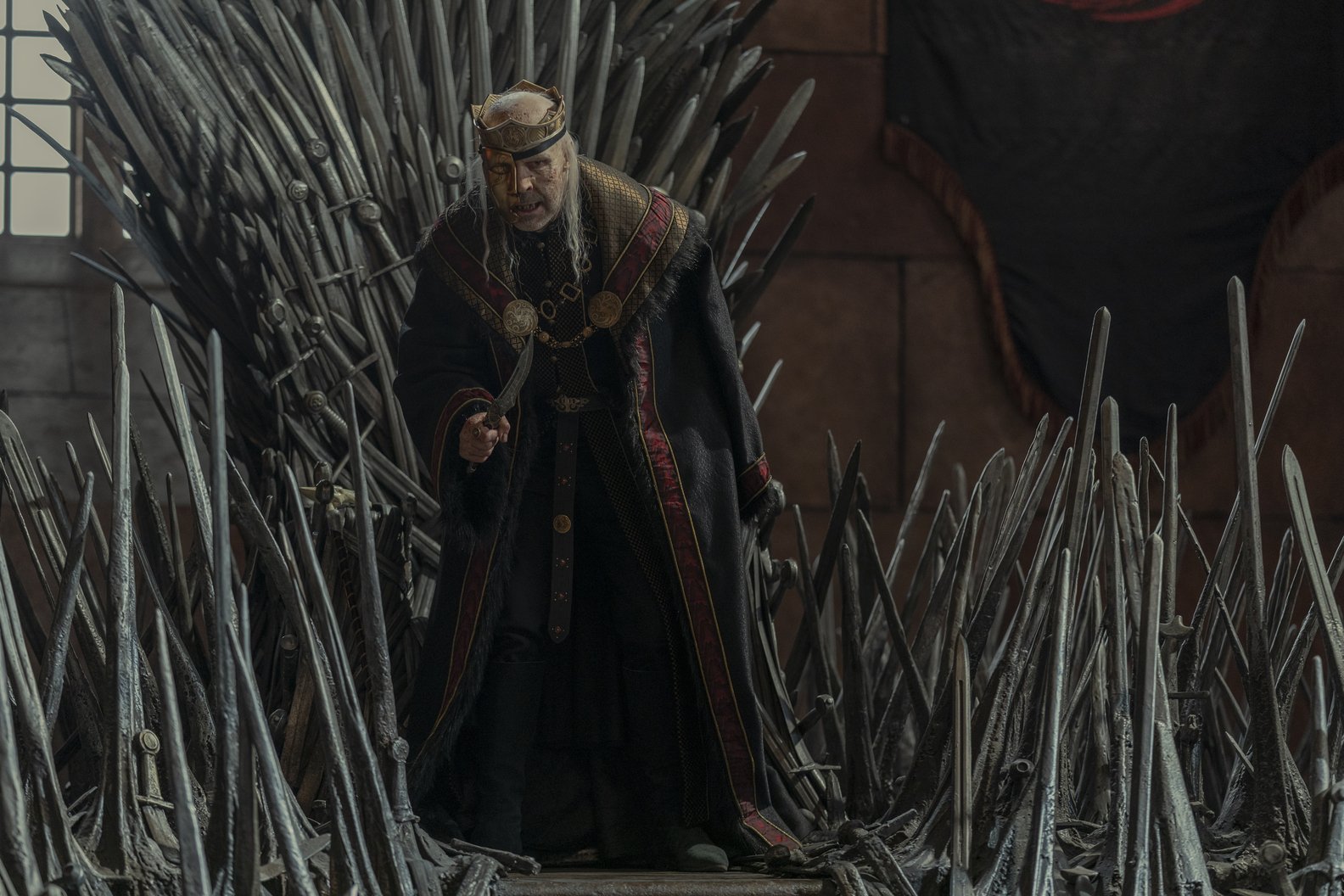 Watching House of the Dragon find its footing has been a rocky experience. At its best, it has been innovative and beautiful, and at its worst, it has been either boring or utterly infuriating. Finally, with its eighth episode, “The Lord of the Tides,” House of the Dragon has proven itself worth the roller-coaster of the first seven. With the exception of one baffling character choice, the episode boasts the series’ best writing, performances, direction, and overall quality thus far. With social media response already predicting a sea of Emmys for the show, the future of House of the Dragon seems bright.

The episode revolves around the question of who will take over Driftmark after Lord Corlys Velaryon (Steve Toussaint) passes away. While Corlys is still alive, a recent injury has people worried that he may not survive, so the discussion is raised at King’s Landing. Corlys wants his title passed to his grandson Lucerys (Elliot Grihault). While it is pretty obvious to everyone that Lucerys is not Corlys’ biological grandson, Corlys is not so concerned about biology and is willing to accept the boy as his true heir. As he says in the previous episode, history doesn’t remember blood: it remembers names.

Less interested in names and more interested in blood, Corlys’ brother Vaemond (Wil Johnson) does not want the title to pass to Lucerys, since this will mean the end of the biological Velaryon bloodline’s claim to Driftmark. Vaemond’s concerns here make sense: the Velaryons are portrayed as constantly being overshadowed by the Targaryens. As Corlys points out, the Velaryons and Targaryens are the only two Valyrian houses left; the Targaryens became kings, while the Velaryons became sea captains. For Vaemond, Lucerys’ claim to Driftmark would mean that the historically sidelined Velaryons would become fully replaced by the house that always got more power and attention than them: the Targaryens would succeed in supplanting the Velaryon line.

The choice to portray the Velaryons as Black in the series becomes particularly relevant in this scenario, making Vaemond’s concerns more relatable to real-world issues. As the only visibly Black house in the Seven Kingdoms, the Velaryons’ fear of losing their house and status, disappearing and being supplanted by the more historically privileged Targaryen line has parallels to real-world histories of white supremacy and colonialism. While race dynamics in Westeros are obviously not the same as they are in the real world, portraying the complex history between the Targaryens and Velaryons, particularly as they relate to Vaemond’s fear about a Targaryen without Velaryon blood taking over Driftmark, allow for an interesting layer of nuance to the situation that isn’t as noticeable in Martin’s novel, where everyone is assumed to be white.

Vaemond begins the episode as an intriguing and sympathetic character, although his writing gets a bit shakier as the episode goes along; in order to keep this review spoiler-free, however, this component will be discussed in more detail in the spoiler zone at the end. With the exception of some strange choices with Vaemond’s character, however, the episode is absolutely stellar.

Ellen Shim’s writing is the best that the series has seen by far, and director Geeta Vasant Patel knows exactly how to translate the script to the screen. Alicent’s (Olivia Cooke) sadness has never been this harrowing, Rhaenyra (Emma D’Arcy) has never been this conflicted yet determined, and Viserys (Paddy Considine) has never been this desperate for others to love each other as much as he loves them. The characters’ conflicts, emotions, and deeply complicated relationships are navigated here with more nuance, sensitivity, intensity, and detail than they have been up to this point, and the episode is a fantastic deep dive into what makes all of these characters so compelling. Shim’s phenomenal script is brought to life with mindful and consistent pacing, beautiful cinematography, stunning sound design, and attention to detail that will impress film buffs and casual fans alike.

Complementing the stellar writing and directing are some of the best performances the show has seen so far. Olivia Cooke is absolutely heartbreaking in this episode; she has more than proven her ability to follow Emily Carey’s phenomenal performance as the young Alicent. Every shot of her conveys a depth of emotion and conflict that is the sign of an extremely skilled performer. Considine is also at his strongest yet; despite the king’s fragile state, he shows a ferocity, intensity, and profound depth of love that is moving and compelling. Along with D’Arcy’s unwavering portrayal of Rhaenyra and Johnson’s conviction and determination as Vaemond, the cast of this episode deserves every ounce of praise that they are currently being showered with on social media. Jaw-dropping performances compliment the writing and direction to make this episode truly something special.

Even if the rest of the episodes end up being disappointing – and one can only hope that they won’t considering the series’ general inconsistency – the first season of House of the Dragon is worth it for this episode alone. The show has spent a lot of time developing some of the most intriguing characters on television right now – sacrificing the grandeur and large scale of Game of Thrones to spend more time delving into a smaller cast of interconnected characters – and this investment proves worthwhile in “The Lord of the Tides.” The episode is gripping, stunning, heartbreaking, and thoroughly impressive, and it will likely stick in many fans’ memories for a long time as one of the examples of what a Song of Ice and Fire adaptation can look like at its absolute best.

Amsterdam Is a Star-studded Mess