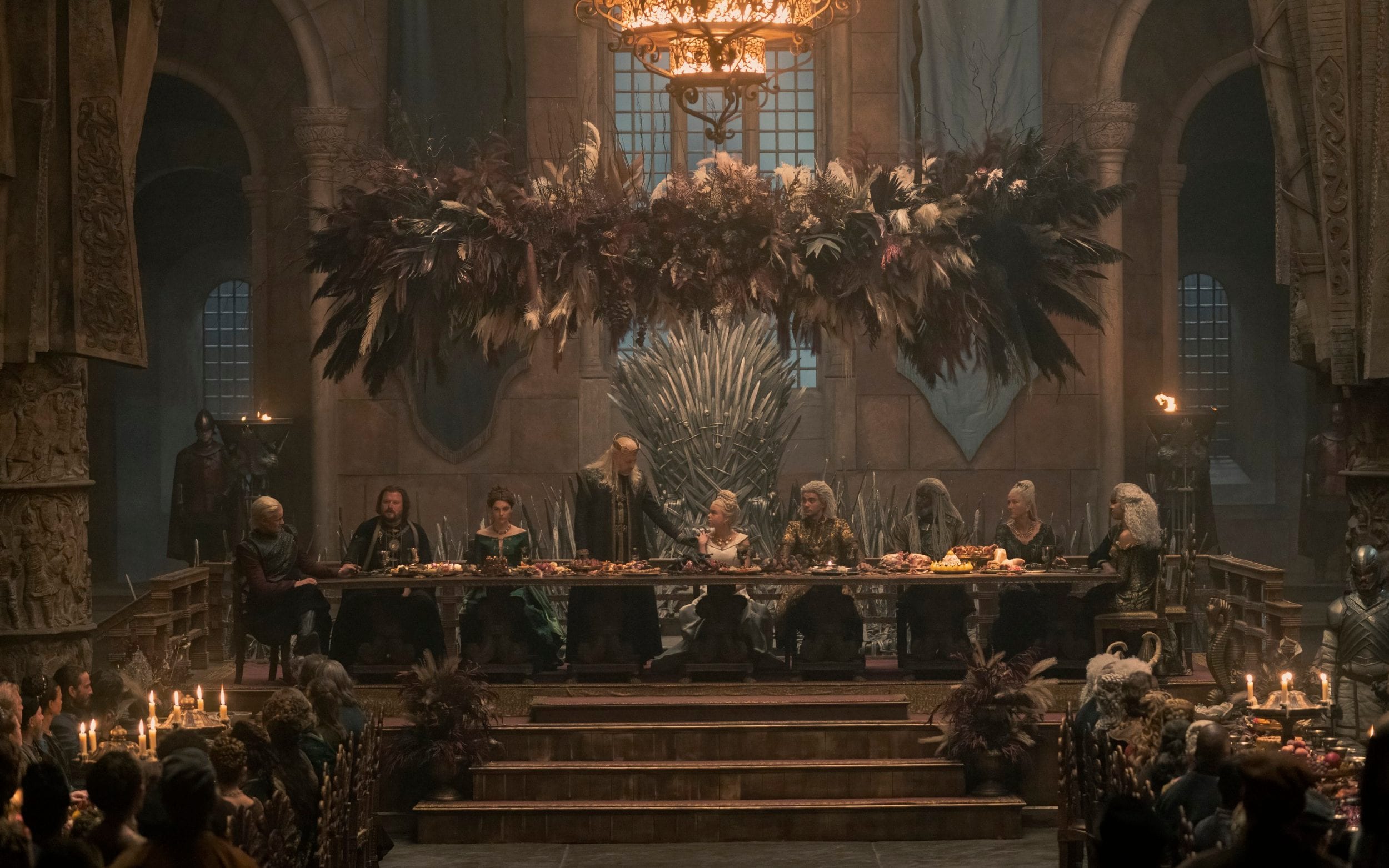 For the most part, “We Light the Way,” the fifth episode of HBO’s Game of Thrones prequel series House of the Dragon, shows just how phenomenal the show can be at its absolute best. The character work is the best and most nuanced that the series has had so far, the plot is delicately and intricately woven, the dialogue is insightful, and the visuals are stunning. The episode is quite nearly a masterpiece. Unfortunately, one rotten apple can indeed spoil the bunch, and there is one particular poorly-managed aspect of this episode that makes it hard to appreciate the beauty of the rest. Despite its many virtues, “We Light the Way” can end up leaving viewers with an extremely sour aftertaste.

The episode is primarily focused on the marriage of Princess Rhaenyra Targaryen (Milly Alcock) and Ser Laenor Velaryon (Theo Nate). Rhaenyra is more sexually interested in her uncle Daemon (Matt Smith) and her personal protector Criston (Fabien Frankel), and Laenor is in love with the unfortunately-named Joffrey (Solly McLeod), but the two agree to have a political marriage that can unite their powerful houses while they pursue their own independent sexual and romantic interests. Their agreement shows that, even though Westeros may be a repressive and misogynist nation, there is still room for individuals to pursue more progressive ways of living.

Also central to the episode is the continuing development of Queen Consort Alicent Hightower (Emily Carey), who is turning into one of the most compelling characters in the series. She goes through substantial, dramatic changes as a character, but these changes are paced so mindfully and effectively that they feel realistic and believable. Alicent begins to question whether her close friendship with Rhaenyra is enough to protect the lives of her and her children; because any child that Alicent has is a potential threat to Rhaneyra’s status as heir to the throne, she is reminded that their lives are always at risk as long as Rhaenyra remains heir. Her gradual development from kindness and trust to suspicion and fear is absolutely gripping, and this episode charts her character growth extremely well.

As always, the performances are remarkable. The writing in this episode is ambitious; the characters are written more intricately than they have been thus far, and it is impressive to see how well a 1-hour episode can develop such nuanced and refined characters. Luckily, the cast is more than up to the task. Alcock and Carey capture every subtle shade and small inflection that makes Rhaenyra and Alicent who they are, delivering layered and fully-developed performances that capture these characters in all of their complexity. The episode also introduces an exciting newcomer in Ser Laenor, whose struggle between personal desires and professional duties is a good mirror for Rhaenyra’s; Nate brings his personality to life very well and makes him an intriguing character to look out for.

What is particularly impressive is that an episode with such intense character work also manages to have an extremely intricate plot. The elaborate network of manipulations, alliances, conspiracies, secrets, discoveries, and plans is woven with a nimble and insightful pen. Based on the writing for this episode alone, it would not be a stretch to say that Charmaine DeGraté is the most skilled writer that the series has showcased so far; she understands both character work and plot development on a level that former episodes have not quite managed to reach. This is the closest that House of the Dragon has come to the craftsmanship that Game of Thrones had at its finest, and it is absolutely remarkable to watch such a refined understanding of character and narrative.

“We Light the Way” boasts stunning visual design, breathtaking cinematography, expertly crafted writing, and a team of powerhouse performers with the skill to bring all of these elements to life. In so many ways, it represents the series at its best and serves as a promise that House of the Dragon can more than live up to Game of Thrones in terms of creativity, skill, and quality. Why, then, is it also likely to leave so many audiences with a bad taste in their mouth and a sense of unease about the series’ future?

Unfortunately, it is hard to answer that question without spoilers, but all of it rests on one extremely poorly-handled scene and the dangerous possibility that this scene represents. While this episode shows how House of the Dragon can rival Game of Thrones at its best, it also shows how it may have inherited more of its predecessor’s problems than many fans may be comfortable realizing.

Out of risk of major spoilers, this section of the review is intentionally vague on this matter; however, I will delve into it in more detail during the “Final Thoughts” section at the end of the review. For now, I will just conclude that it is unfortunate that an episode that is so breathtaking in so many ways is ultimately soured by one bad note. Hopefully the bad doesn’t overshadow the good too intensely: the episode’s wonderful qualities still deserve to be appreciated, even if it is harder to truly love the episode than it would be without its major flaw. One can also only hope that, unlike Game of Thrones, House of the Dragon may be open to learning from its mistakes and avoiding situations like this in the future.

In lieu of my usual list of various notes and observations, this week’s final thoughts will explore one major issue in a bit more detail than the spoiler-free section allows.

Despite my immense enjoyment of Game of Thrones, the series often found ways to remind me that, as a queer person, I was never really welcomed in as an audience member the way that its primary audience of straight men is. The show was not written for “people like me,” and it regularly managed to make this fact known. While the show regularly featured the violent deaths of beloved characters, it seemed to particularly relish the death of queer characters.

Pretty much every queer character except for Yara Greyjoy is subject to a particularly brutal death, and the violence directed at queer characters is disproportionate. While we see many straight characters dying violently, we also see many of them thriving, living long and interesting lives (for Westerosi standards at least), surviving for several seasons, and having happy relationships and complex character development. Queer characters, in contrast, tend to die quickly, have very little screentime or development, and often experience some of the most graphic and brutal violence in the series inflicted upon them. Watching Game of Thrones as a queer viewer means subjecting yourself to a constant feeling of disappointment and defeat as yet another promising queer character is quickly dispatched before their arc even really begins.

House of the Dragon avoided this issue mainly by avoiding queer representation altogether: not exactly ideal, but at least not actively harmful. Starting next week, Rhaenyra (arguably the protagonist and lead character of the show) will be played by nonbinary actor Emma D’Arcy, which also gives hope that the series might improve upon Game of Thrones’ terrible legacy when it comes to queer representation. However, thus far, it has not been doing great.

So far, there have only been two extremely graphic depictions of violent on-screen deaths against major named characters. Not counting non-principle characters like the Crab Feeder’s victims, the camera in this show differs from that of Game of Thrones because it tends to cut away from the violence before anything particularly gory happens. For example, at the beginning of this episode, we don’t actually see Daemon kill Rhea; the camera pans away right before she is struck.

It is not lost on many viewers that the two notably graphic deaths of principal characters that we do see in this show are the gruesome murder of Queen Aemma (very explicitly gendered since it happens during childbirth), and one committed upon one of the first two openly queer characters very shortly after his first introduction, and directly tied to his romantic involvement with another man. The homophobia and misogyny from Game of Thrones keep finding ways to leak into its prequel. The fact that Joffrey’s murder strongly resembles the similar murder of Oberyn Martell is also hard to ignore, particularly because this is not how he dies in the ASOIAF books, where his death was much less gruesome.

This isn’t to say that queer characters shouldn’t die, or even that they shouldn’t die gruesomely in a show where gruesome deaths are the norm. It is, however, to say that it is disturbing when queer characters disproportionately die in notably graphic scenes, shortly after their introduction, and frequently in ways that are directly tied to their queer representation (ie. Loras’ terribly-handled conversion therapy plotline). When queer characters are so hard to find in mainstream fantasy fiction, it is hard not to feel a sense of crushed hope when one is introduced only to be brutally offed less than an hour later. Because the violence in House of the Dragon in general is substantially toned down from Game of Thrones, it is hard not to be frustrated when queer representation is almost immediately accompanied by a scene like Joffrey’s murder. As a queer viewer, it is difficult to leave this episode feeling anything but a deep, cutting sense of sadness and betrayal.

That being said, we do still have Laenor Velaryon. While the plot of the Dance of Dragons necessitates that he will die eventually, there is a chance that he will actually get to stick around long enough to be developed and treated with some respect and dignity by the show before this happens. “We Light the Way” may have been House of the Dragon’s first flirtation with homophobia, but it is also its first episode written and directed by women, and the series seems to be taking women’s representation more seriously; perhaps it may consider doing the same thing for queer characters. There is potential for Laenor to have some dignified treatment before his death; between him and D’Arcy’s upcoming introduction as Rhaenyra, there may still be some hope for queer fans of ASOIAF who want to enjoy a television show without feeling alienated and disappointed.

Andor is Off to a Slow Start, But The Rebellion Looks Bright

How Will King Viserys Targaryen Die?