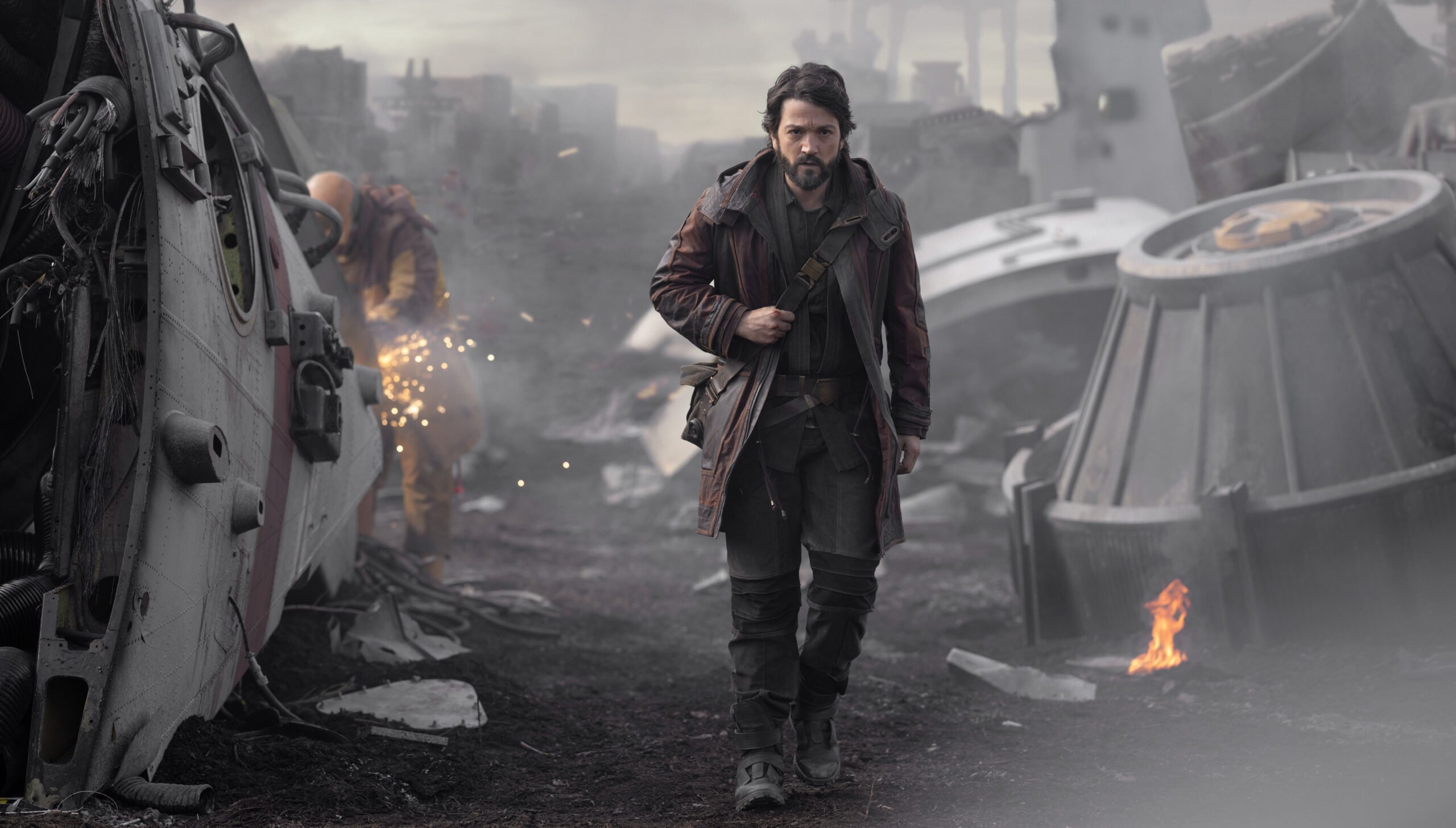 Another origin story that leans into the beginning of the Rebel Alliance, or a true departure from Star Wars norms and tropes? Despite a lot of word of mouth that Andor is “the most serious Star Wars content yet” or “different from anything else Lucasfilm has recently created,” Diego Luna’s return to the small screen as Cassian Andor comes off as just another Star Wars series–perhaps one with a bright-looking future, nonetheless, one containing nothing new. Andor is shaping up to be a captivating prequel series that mixes science fiction and espionage elements into an iconic galaxy, but Lucasfilm’s latest streaming series will have a lot to prove before it can be held in high regard or justify its own existence.

In Andor’s first three episodes, audiences are reintroduced to a younger iteration of Diego Luna’s Rogue One Hollywood hero, Cassian Andor, five years before the rebels stormed the beach of Scarif to steal the Death Star plans from the Galactic Empire. Looking to run from a growing order of evil, Cassian’s destiny takes a major turn when he accidentally kills an imperial officer and is introduced to a senator who secretly traverses the galaxy in search of fighters who can fuel the fire of rebellion. Like many other Star Wars properties from throughout the franchise’s current and Legends canon, Andor places its focus on the origins of the Rebel Alliance from a different angle. Andor is a story focused on fleshing out its titular character and building upon how the underdogs came together for their greater cause, both in the political world and on the battlefield.

The premise may not sound as interesting as some of the other Disney+ Star Wars shows, both animated and live-action, but Andor makes an effort to differentiate itself from the rest of Lucasfilm’s lineup by sticking to original characters and a more grounded tone. Andor feels like the first Star Wars live-action property since the Disney buyout began to not rely on any cheap parlor tricks with fanservice and nostalgia pointers. Yes, there are references to the movies, shows, and games in Andor (the first three episodes take place on Farinax, a planet seen in The Mandalorian), yet there is nothing being shoved in the audience’s face that they will instantly recognize. Andor makes it clear the series is going to stray from the powers of the force and reach into territories of guerilla warfare. That different albeit familiar setup and tone for Andor can feel like a breath of fresh air, but only when pit against Disney’s other recent Star Wars shows.

Andor’s showrunners are evidently trying to make a series that leans into the isms of Star Wars yet also runs away from them. The show feels grounded and militaristic in many regards, but saying Andor is more mature than The Mandalorian or even Obi-Wan Kenobi is debatable. Outside of some minor sex, violence, and maybe a cuss every so often, there is nothing that makes Andor more serious or adult-targeted than the other Star Wars shows on Disney’s streaming platform–the studio’s last project definitely has had several more mature scenes so far, but this stance can also obviously change as the series continues. Again, in comparison to even some of the earliest chapters of The Mandalorian (where aliens were being sliced in half by doors) or Obi-Wan Kenobi (Darth Vader mowing down innocent civilians just to find his former master), Andor’s maturity is nothing new for this franchise’s recent endeavors–especially if we are to account for the animated Star Wars shows like The Clone Wars.

However, what does make Andor unique in comparison to its companion shows on the platform is that aforementioned grounded feeling with militaristic aspects–it just hasn’t reached its full potential yet. What Andor does best in its premiere is build upon a story that feels as grounded as Star Wars can possibly get as its characters must play dirty to achieve victory against a powerful order. However, Andor should be a show that relies on visuals rather than dialogue. Much like The Book of Boba Fett, Andor commits to a lot of audible explaining rather than just showing the audience their great concepts. Introducing many elements and aspects of a world is always necessary for fiction, however, many of this show’s conversations can be cut down to mere sentences if they were to focus on visual storytelling.

For example, the introduction of Kyle Soller’s character Syril in episode one is a long exchange that treats viewers as if they are unintelligent. The over-explained conversation about how the Empire will ignore two dead soldiers is all information the viewer should be able to instantly pick up upon meeting Soller’s arrogant higher-ups. These are not dialogue exchanges they have to sit through to understand what’s going on–this is arguably the reason the first two episodes feel brutally slow in comparison to the third chapter that concludes the show’s first arc.

Staying on the topic of the Empire though, Andor’s main weaknesses derive from not only conversational moments in its script but how it has handled the villains so far. The defense force group working under the Empire does provide some interesting narrative points for the story, but it will not take long for viewers to start hoping that the team of seemingly dim-witted soldiers becomes more of an obstacle for the heroes. Kyle Soller gives a rather great performance as Syril, a soldier looking to climb the ranks of the Empire, but viewers can only hope he is going to grow into a complex villain that will be radicalized by the actions of the rebels. So far, Andor’s imperial forces do not feel like the complete bumbling idiot canon fodder other Star War properties have made Stormtroopers and bounty hunters out to be, yet they don’t feel entirely intelligent or savvy enough to face the underdogs. They clearly are going through trauma, but the horrifying conflict these soldiers and leaders are facing needs to be further explored.

In contrast to the Empire though, the rising and current heroes of the Rebel Alliance are where Andor unsurprisingly shines most. So far, the childhood days of Cassian Andor that are tied into the present feel well-executed, and some of the minor cast members simply steal the show–even from Diego Luna who is doing a phenomenal job. After The Book of Boba Fett and Obi-Wan Kenobi struggled to make some of its minor characters more interesting, Andor is off to a strong start in building its supporting players—at least, again, for the most part as the Empire struggles to gain any major footing on the show’s spotlight.

For starters, Stellen Skarsgård’s character Luthen Rael is downright fantastic. Every time the actor is on screen with Diego Luna, the two are a power couple that feel naturally placed alongside one another. No matter what is going on in the moment, their chemistry constantly makes each scene engaging, and both actors are doing a tremendous job when it comes to showing emotion and bringing an essence of mystery to their roles. While there are also other minor cast members to highlight, Andor’s premiere certainly leaves a lot to desire from them–but that is okay as they are left with plenty of room to grow throughout the first season. Genevieve O’Reilly and Adria Arjona, in particular, are often leaving the audience wanting to know more about them.

While there are not many action scenes in Andor’s first three episodes, what is offered to audiences feels weightful, creative, and loose—and I mean that in a great way. A lot of the recent action sequences in the Star Wars shows outside The Mandalorian have felt flat and painless. Background cast members and important characters are always seemingly either missing shots or being knocked back by explosions without injury. In Andor, there are characters who get directly shot in the head and blown up. For a character destined to die amidst retrieving the Death Star plans, Andor should feel chaotic as the show must build its stakes around every character surrounding Cassian–the audience should be worried if the new characters will meet their end. To establish stakes in a prequel, audiences want to see both an emotional journey for the returning hero and potential room for more exploration with the newcomers. Thankfully so far, Andor seems to have both laid out for the rest of the season.

On a final note, one aspect of Andor that can use some major improvements is the atmosphere–or rather its approach to creating life roaming around the iconic galaxy far far away. Andor is yet another Star Wars show that can feel as if its studio is being cheap when utilizing the science fiction elements fans love about the franchise. Between familiar and new Star Wars species, there are not many aliens in Andor, or droids for that matter. When they do occasionally appear, each species are presented like unnoticeable background characters that can blend into large human crowds.

Additionally, there are a lot of intelligent droids speaking English now which can be off-putting. Star Wars has always had plenty of droids and aliens speaking English, but they were always kept to a minimum. When a droid spoke the language of humans, it made them feel all the more significant. Considering Cassian Andor grew up speaking a fictional language the audience cannot understand, surely not every droid needs to speak perfect English. Again, the atmospheres here are great—the set design, locations, costumes, and effects always pop—but the lack of unique aliens and droids can often make Andor present itself as just another science fiction universe rather than Star Wars. Perhaps though, these stylistic choices are also on purpose.

Andor’s first few episodes may not be the best live-action Star Wars content yet on Disney+, but the show definitely could infiltrate the high ranks and become a captivating science fiction thriller series in the future thanks to its grounded tone and focus on militaristic aspects. Andor just needs more strong allies and foes that can help make audiences care about Cassian’s story. Audiences know this character is going to die in the future. To make Andor not feel like a detour before Rogue One takes place, the show is going to need to rely on its leading and minor characters that stand alongside and in opposition to Diego Luna.

Viewers can only hope Diego Luna’s rebellion hero will create his own uprising for a franchise arguably in need of some new invention. Andor has a lot of promise, and hopefully, its potential will be used to escape the ugly aspects of Disney’s most recent Star Wars shows.

House of the Dragon: “We Light the Way” is Sophisticated, Beautifully Written, and Utterly Infuriating