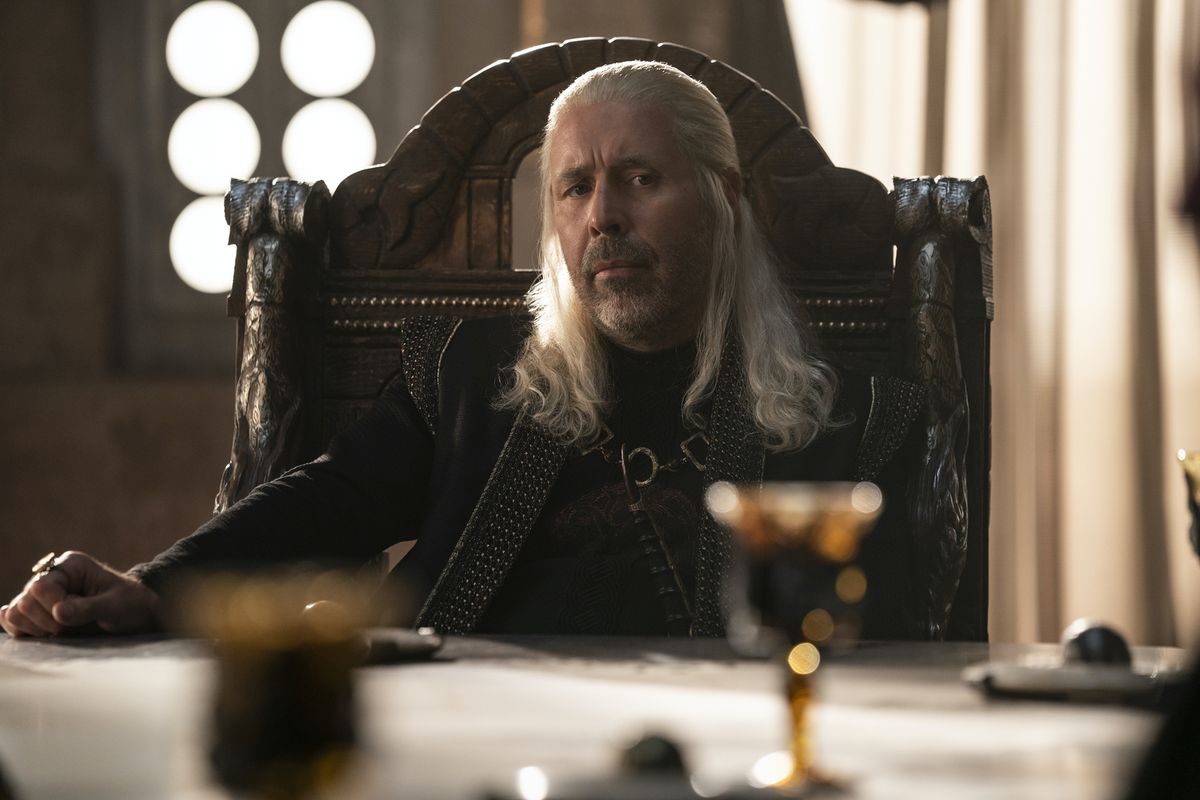 With a rotting disease from the Iron Throne ravaging his body and enemies all around, things aren’t looking great for King Viserys. He is losing trust in everyone, bringing to mind the madness known to run in the Targaryen family. His family seems mostly loyal, yet his actions are pushing them away. It isn’t paranoia if they really are all out to get you, right? There is any number of ways a king might get taken out in the Game of Thrones universe, and here are some ideas kicking around as to how it might happen:

Death By a Thousand Cuts

One of Westeros’ many superstitions proposes that the Iron Throne itself judges worthiness, and cuts those it finds wanting. Viserys has lent credence to this, with cuts in his skin matching the number of questionable decisions he has made. One of them happened right after he lets his wife die in hopes of producing a male heir. The young prince lives barely a day and Viserys names Rhaenyra his heir, which is what he should have done, to begin with. His body is covered in lesions and he has already lost two fingers. The sickness certainly could spread someplace the doctors couldn’t just amputate. But that’s not really a Game of Thrones way for a major character to die, so call it a very slim possibility.

The Spouse Is Always The First Suspect

Alicent offered the king solace after his wife died, although it was at her father’s request. As Viserys reminded Rhaenyra, the king or queen must fulfill certain obligations. Sometimes people in arranged marriages grow to love each other. However, the look on Queen Alicent’s face as they made love made it clear she would rather be locked in a cave with one of the family’s dragons.

Murder investigations often begin with the significant other because they often have the most to gain. People have been murdered for a lot less than an entire kingdom. Nobody spends more time alone with the king, nor can anyone else have his guards quite so easily dismissed. She might not commit such a heinous crime on purpose. Alicent has shown she can be manipulated. Some poison in place of medicine and not too many people might question it, especially if they have seen the king’s injuries.

Despite the Small Council and the Hand of the King’s protests, Daemon hasn’t done anything other than act out against his brother. Daemon realized what Otto Hightower was playing at long before the king did and warned him. He genuinely appears to crave his family’s respect. That said, Viserys was extremely angry that the prince made advances on his own niece. The king may finally grow tired of covering for Daemon and try to have him killed or try to kill him by his own hand. That is to say, the hand that’s missing a couple of fingers. These two might let their rivalry go so far one of them has to kill the other one. The wily one hasn’t made a direct move on the throne, but if the seat accidentally ends up empty, he’s not above sitting on it.

You Can’t Trust a Guy Called The Sea Snake

Corlys Velaryon has tried playing nicely, first trying to marry his daughter into the king’s family. Now his son is put forth as a partner for Rhaenyra. Corlys told Daemon that as second sons, they must make their own way in the world. That led to an almost disastrous war against The Crabfeeder. He put King Viserys in a bad spot and defied his wishes. A more vengeful or competent king could have him brought up on treason. Lord Corlys’ wife has a legitimate claim to the throne, getting denied only because she is a woman. One of the reasons Viserys wants a political marriage is because he knows how difficult The Sea Snake can make things for him.

Like Daemon, Velaryon has shown he’s willing to take dangerous risks because of his second son status. Even if he doesn’t take up arms against Viserys himself, his actions could easily cause a war that ruins the status quo.

You Have To Hand It To Him

It took warnings from family, and perhaps the realization that a 20-year-old woman might not really love a decaying 60-year-old man, but King Viserys finally realized Otto Hightower was playing him. The now former Hand of the King has placed his daughter and grandson in line for the Iron Throne, but all that is meaningless while Rhaenyra is the heir. Hightower has angled for power his whole career and suddenly had it taken from him. That’s a powerful motive to act against the king with every dirty trick in his playbook. Since his initial plan is falling apart, Hightower may wonder what he has left to lose. Sometimes the best answer is the most obvious one. The guy with a whole network of spies and a brand new motive to use them looks like the best answer.

House of the Dragon: “King of the Narrow Sea” Takes a Huge Gamble