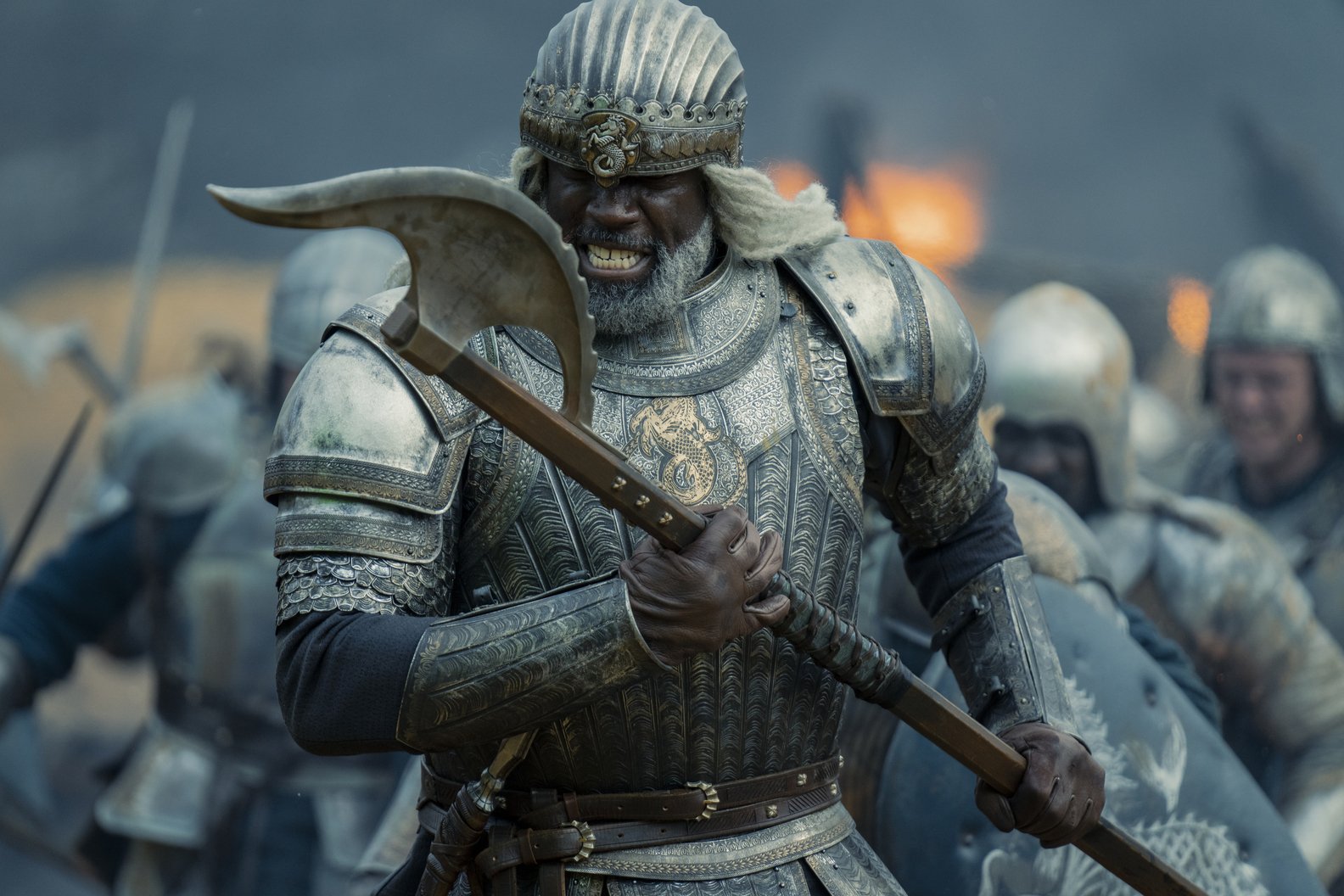 “Second of His Name,” the third episode of HBO’s new A Song of Ice and Fire series House of the Dragon, is not a bad episode of television. There is a fantastic opening scene, a few good lines, a handful of enticing moments, and a really cool dragon. However, compared to the series’ first two, very impressive, episodes, “Second of His Name” falls a bit flat.

“Second of His Name” opens with what is one of the series’ strongest scenes so far, making the remainder of the episode struggling to measure up. We open again on Craghas Drahar (Daniel Scott-Smith), the brutal and violent “Crabfeeder,” as he nails one of his victims to a wooden pole and watches as crabs eat him alive. It is hard to describe what happens next without spoiling a scene that relies on a surprise for its impact; however, it rivals some of Game of Thrones’ most powerful moments for its poignancy and pointed statement.

There will be more commentary on this specific scene in the spoiler-filled “Final Thoughts” section at the end of this review. In the interests of keeping this review otherwise spoiler-free, I will simply conclude my commentary here by saying the scene is insightful, impactful, and expertly directed.

The rest of the episode takes place three years after the previous episode’s ending. It is mostly focused on a hunt celebrating the second name day of the infant prince Aegon, the son of king Viserys (Paddy Considine) and his new wife Alicent (Emily Carey). Unhappy that her father has married her best friend and fathered a son whom she suspects will take away her status as heir to the throne, princess Rhaenyra (Milly Alcock) spends most of the episode sulking and pouting. Not much really happens at the hunt besides men trying to woo Rhaenyra, Rhaenyra being sad, and Viserys being drunk (and also sad), yet for some reason, the event occupies the majority of the episode.

In addition to the hunt, we also see some more of the events surrounding Craghas Drahar. Taking advantage of the large size of the Targaryens’ dragons, Craghas has taken to hiding his army in a series of caves, frustrating Daemon (Matt Smith) and Corlys (Steve Toussaint), who find themselves unable to defeat the Crabfeeder as easily as they expected. Almost everyone wants Viserys to send troops to help his rebellious brother in the fight, but Viserys is worried that doing so will make him look weak since Daemon rejected Viserys’ choice to appoint Rhaenyra as his heir instead of Daemon. As is usual for the Song of Ice and Fire universe, the petty family squabbles of noble houses result in the deaths of countless innocent people.

Speaking of petty family squabbles, the way that this episode writes Rhaenyra is utterly baffling. The first two episodes saw a complex, nuanced character developing interesting ways of navigating challenging relationships with others and with her own place in society. This episode sees a generic rendition of an angsty teen with nothing resembling the Rhaenyra of the first two episodes. While Rhaenyra has good reason to be upset, and teenagers do often tend towards angst, her attitude in this episode is almost parodic and feels very out of character. Luckily, Milly Alcock is a fantastic actress, and she still manages to let some of the characters that fans have grown to love to shine through; however, Alcock is working against a very flat script.

In general, characters are written with much less complexity in this episode than in the others. Viserys spends most of the episode being drunk and grumpy, almost resembling a caricature of a dissatisfied and discontent suburban dad. When he’s not pouting, he is acting as blissfully unaware and inept as usual; the episode briefly tries to find moments of depth for both him and Rhaenyra, but the writing for both ultimately comes across as shallow. The only character who comes across with nuance in this episode is Alicent, whose attempt to adjust to her new role as queen and her complicated relationship with her former best friend is compelling.

Not surprisingly, the characters who do come across very well in the episode are ones that aren’t particularly known for their subtlety. The episode introduces the pompous, ridiculous Jason Lannister (Jefferson Hall), whose failed attempts at flirting and general air of self-importance lend some much-needed comic relief to an otherwise somewhat dull episode. Hall is hilarious, and the character is sure to be a lot of fun. Smith also continues to deliver a fantastically fierce intensity to the unstable Daemon, and his performance creates some of the episode’s best moments. This episode is at its best when it is at its least subtle, making it a tough match for a show that has thus far been able to pride itself on its subtlety.

“Second of His Name” is a bit of a rough patch, but not rough enough to seriously harm House of the Dragon’s momentum. The first two episodes were strong enough that it will take more than one somewhat subpar episode to derail the series. Furthermore, the episode does have enough strengths to make up for its weaknesses. The opening scene alone is strong enough that it would make for a good stand-alone short film, the performances continue to be great (even if the actors are sometimes working against the text), and some of the scenes with Daemon are phenomenally done. In the end, the brief moments of good outweigh the long moments of mediocrity, and “Second of His Name” ends up being a satisfactory, if underwhelming, contribution to a series that is still shaping up to be phenomenal.

NBC Giving Up Its 10 PM Time Slot: Is This the End of the (Media) World As We Know It?