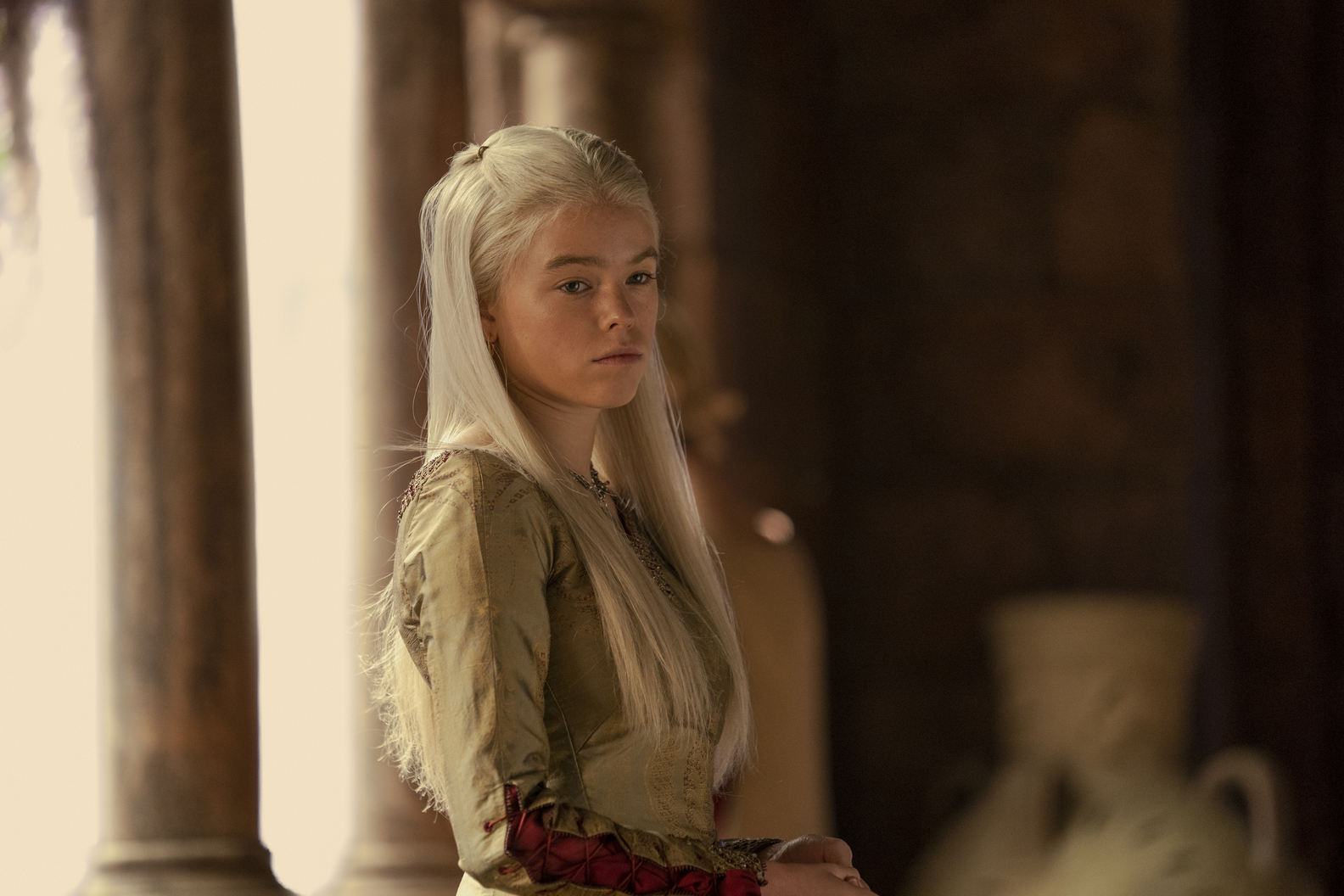 Last week, I praised House of the Dragon for daring to break free from its predecessor by pursuing a significantly different dramatic and narrative direction. While the series is clearly respectful of Game of Thrones, the previous series’ huge scale, massive cast, and a general sense of grandiosity has been traded in for a more intimate, subdued affair. The series’ second episode, “The Rogue Prince,” more than proves that House of the Dragon is handling this new direction well.

“The Rogue Prince” sees the premiere of House of the Dragon’s new opening credits sequence, which uses the same musical theme as the sequence from Game of Thrones. While House of the Dragon’s choice to use the exact same song as Game of Thrones may seem to undermine its attempt to claim its own identity, the choice actually has the opposite effect because of the starkly different cinematic sequence that accompanies it. Game of Thrones’ opening credits displays a large map of Westeros and Essos, bringing audiences through a tour of the locations that will be featured in that episode. House of the Dragon uses the same song to bring audiences through a more focused setting: a 3D model of Old Valyria adorned with symbols and blood that make it resemble a family tree. The opening symbolizes the series’ goal of blending homage to Game of Thrones with a firm desire to carve out its own unique identity.

Choosing an appropriately intimate, character-focused theme, “The Rogue Prince” is all about communication. Characters in the episode are desperate to communicate with each other, and the successes and failures of their attempts to be heard are riveting. Writer Ryan Condal handles this topic with the kind of smart and nuanced narrative that is to be expected of a high-caliber HBO series. Whether it’s through intimate conversations or dramatic actions, almost every moment in the episode depicts someone’s attempt to either understand or be understood, and the results range from inspiring to heartbreaking.

Months after Queen Aemma (Sian Brooke) dies, her husband Viserys (Paddy Considine) and daughter Rhaenyra (Milly Alcock) have still barely spoken to each other. Much of the episode follows their struggles to reconnect, as both find themselves unable to reach one another. The script brilliantly explores moments when words are not enough and sincere communication sometimes can only begin once someone takes action.

The episode also follows the experience of Corlys Velaryon (Steve Toussaint), the Master of Ships whose men are being brutally murdered at sea by the “Crab Feeder” Craghas Drahar (Daniel Scott-Smith). Worried about the security of his throne and risks of aggression, King Viserys hardly pays any attention to Corlys’ pleas, as Corlys becomes more and more desperate to be heard. Also desperate to be taken seriously is Daemon Targaryen (Matt Smith), who has responded to losing his claim as heir to the throne by amassing a rebel army. His dramatic cries for attention are the closest that the series gets to some of the more theatrical elements of Game of Thrones, and Smith’s portrayal is fantastic.

“The Rogue Prince” also follows two young girls, Alicent (Olivia Cooke) and Laena (Nova Foueillis-Mose) who are pressured by their fathers to raise their families’ positions by attempting to marry the much older king. In a particularly heartbreaking scene, 12-year-old Laena is literally unable to speak her own words, reciting a speech that her father has prepared for her about why the king should marry her.

Alicent and Laena are pushed into situations where they are robbed of agency, and the result is a tragic portrayal of what happens when someone is robbed of their voice. The series is clearly aiming at a feminist critique of patriarchal structures and a criticism of terrible practices like child marriage; however, it is uncertain whether the creative team (helmed by two male showrunners) has the perspective and nuance to handle these themes effectively, particularly when Game of Thrones handled them so terribly. Some people are still rightfully skeptical, and it’s still unclear why the producers hired two men as the showrunners of a series that aims to delve so extensively into intense explorations of women’s oppression.

In navigating its communication breakdowns, the script smartly explores the many different ways that people make themselves heard. Between hostile confrontations, formal political discussions, blunt and direct conversations. subtle manipulations, lovingly intimate moments and direct nonverbal actions ranging from theft to dragon riding, everyone in House of the Dragon uses different communication strategies to connect with each other. The episode has a deft approach and a strong understanding of character and human behavior, and its brilliant exploration of characters through a wide array communication strategies is both clever and insightful.

The sound design for this episode is also stunning, if sometimes a bit on the nose. Contrasting the literal crickets chirping while Viserys and Thaenyra talk with the delicate birds tweeting during Viserys’ conversation with Alicent is a somewhat obvious choice, but it cultivates exactly the intended tone for those moments. “The Rogue Prince” has relatively sparse music: the episode makes strong use of silence, and the moments when sound and music are used really stand out.

So far, House of the Dragon is off to a very strong start. As of its second episode, the characters are starting to develop more, and this looks like an extremely promising cast. Smith and Alcock remain the standouts, although Toussaint is also beginning to shine more. As characters and relationships become more defined, stakes begin to raise, and the plot begins to take off, House of the Dragon seems poised to deliver the exciting, insightful, and high-quality series that fans have been hoping for.

Unlike the rest of the review, which aims to be as spoiler-free as possible, this section explores some additional notes on the episode, and may occasionally dabble into major spoiler territory, both for this episode and for the larger ASOIAF universe. Proceed at your own risk.

– For anyone who doubts that there are talented women writing fantasy right now, here are a few recommendations. With powerhouses like N. K. Jemisin on the scene right now, and Lauren Schmidt Hissrich successfully thriving as The Witcher’s showrunner, it’s astonishing that the producers thought it would be reasonable to hire such a male-dominated creative team for a show that is working to center feminism.

– Milly Alcock is an absolute star. While fans should obviously welcome Emma D’Arcy when they eventually take over the character of Rhaenyra, and D’Arcy has the potential to bring an exciting approach to the character, Alcock will be seriously missed when the switch happens. Here’s hoping for many flashbacks and other opportunities to see Alcock show off the phenomenal performance skills she has demonstrated in these first two episodes. She has definitely stolen fans’ hearts as Rhaenyra, and fans can only hope that D’Arcy can do the same.

– Ser Criston Cole (Fabien Frankel) is clearly being primed for a major role. Very little has been revealed about his personality, motivations, or role in the grand narrative, so it will be interesting to see what the series does with a character that they are clearly hyping up.

– This episode sees the beginning of the rift between former best friends Rhaenyra and Alicent (Emily Carey). The two actresses have extremely strong chemistry as friends, so it will be interesting to see how they play off each other as rivalry begins to emerge.