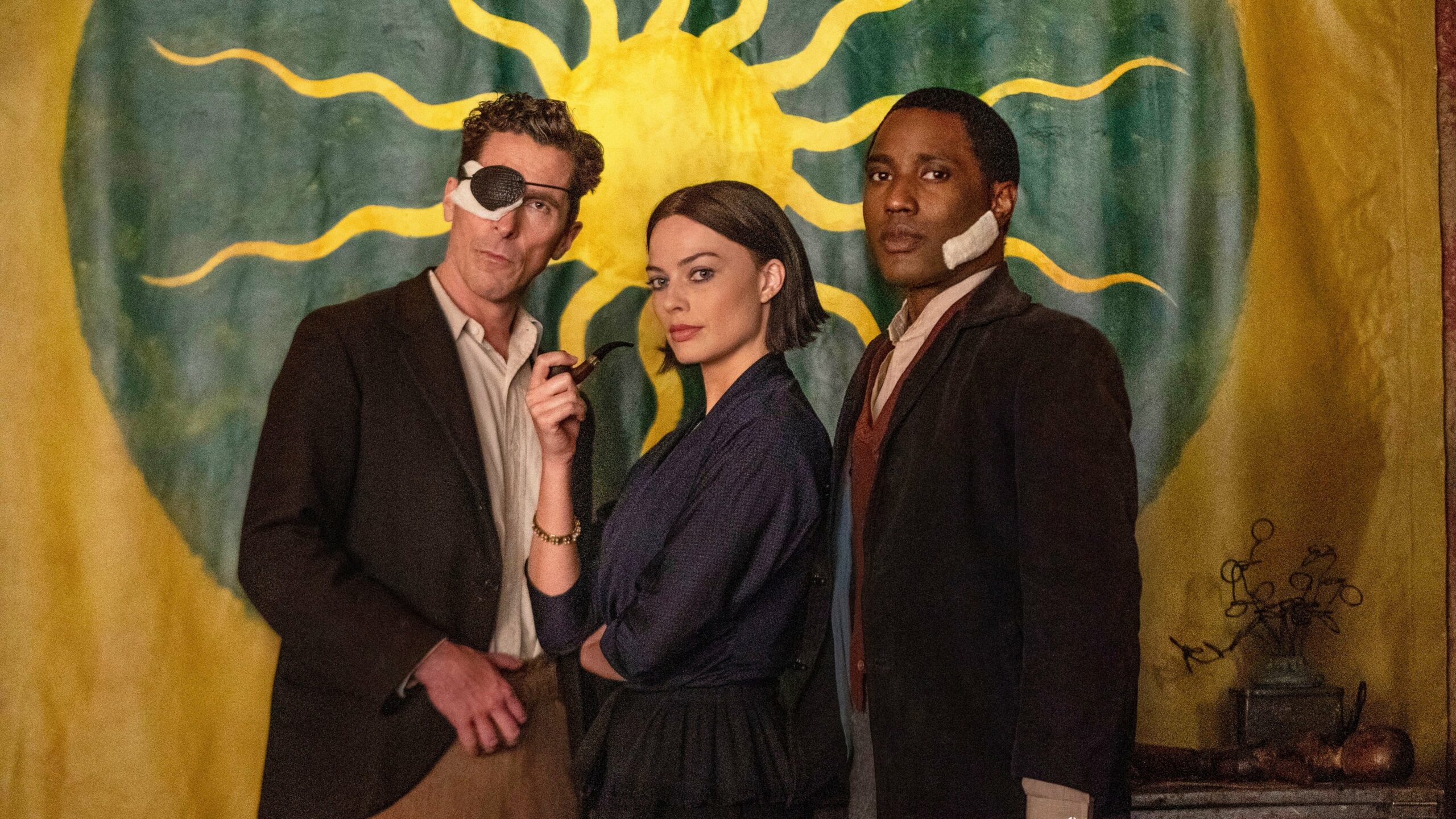 Amsterdam, David O. Russell’s first outing since the abysmal Joy, is a film that arouses love and admiration but one that never earns it. It’s chock full of great moments but fails to gel them together into a cohesive and enjoyable whole. This is the result of a self-aggrandizing approach, where the star-studded cast and overly simple story are made the focal point in itself, striving for a greater importance that isn’t there. Consequently, the film comes across as a diluted, thinly veiled, version of Russell’s previous Oscar bait-y efforts.

Somewhere, hidden under all the absurd and confusing creative choices, there is a glibly entertaining crime caper, but it’s repeatedly undone by a penchant for overcomplication and self-importance—inducing contempt in place of earned emotion and catharsis.

The story centers around a relationship between three war veterans, Burt (Christian Bale), Harold (John David Washington), and Valerie (Margot Robbie) who meet in a hospital during the twilight of World War I. They quickly strike up a friendship pact and live out in Amsterdam until their pasts come knocking, forcing them to return to the United States.

It’s now the early thirties, Burt and Harold work together but have lost touch with Valerie, who vanished without a trace in Europe. The two witness a murder and are subsequently framed for it. In a bid to prove themselves innocent, they run into Valerie and uncover one of the biggest conspiracies in American history.

On the journey, the three butt heads with a plethora of absurd characters played by Hollywood stars like Robert De Niro, Michael Myers, Chris Rock, Anya Taylor Joy, Rami Malek, and Zoe Saldana. Add in Michael Shannon, Timothy Olyphant, and Taylor Swift, and you have the most stacked cast of the year.

Yet, this ensemble of great talent is wasted by the film’s insistence on convolution. The narrative’s shifting turns and revelations should be entertaining, but only prove to be utterly exhausting and eyeroll-inducing. This is due to a bevy of tired and confusing creative choices that zap any semblance of fun out of the narrative, as each plot point is mired in needless complication and endless exposition.

The film is entirely too fixated on its star cast to generate any true interest in its would-be compelling story, with each character being introduced with an obnoxiously gimmicky close-up that shatters every notion of immersion. It’s clear that this is nothing more than a vanity project, hoping to curry favour with seasoned academy voters who will surely be impressed with the star power on display.

Moreover, Russell’s filmmaking is haphazard at best. The editing is littered with cuts and transitions to many obtrusive angles that jar instead of being seamless. It goes from an over-the-shoulder to a direct close-up to a wide, and then back again to a close-up. It’s a dizzying pattern that feels wholly unthought-out, relying solely on the cast to carry it forward. Couple this with narration from Bale’s character that literally spells out the plot twists and ultimate themes, and it becomes abundantly clear that Russell himself didn’t have confidence in the story.

This is most egregiously realized in the final act, where its confoundingly dumb conclusion tacks on a wholly unearned commentary on American principles, the evil nature of elitism, and the tapestry-like nature of life. The film is nowhere near as clever as it thinks it is, as its overbearing, conceited view of itself rings infinitely hollow.

With so much going wrong, it’s a miracle that the performances, for the most part, are great. Christian Bale steals the show as Burt, a bumbling war physician whose drifting glass eye and addiction to painkillers is an utter delight to behold. His oddball but endearing persona steals each scene and is the film’s sole saving grace. He brings a pure dynamism to each encounter that makes Amsterdam’s conceited plot points bearable, and it wouldn’t be a surprise to see him nominated come Oscar time. John David Washington and Margot Robbie are also excellent, rounding out the central trio with deft and vibrancy, tapping into the era’s mannerisms with ease.

The rest of the cast also brings forward great performances, adding a much-needed nuance, vitality, and innate fun to the overweening narrative. The period setting is also realized with skill, with the production design and costuming impressively bringing 1930s New York to life.

Amsterdam is a film that you want to love but struggle to muster the feelings needed to do so. It’s a testament to the stellar cast that you feel that way at all, as Russell’s latest venture is a self-glorifying experience that is riddled with bizarre technical choices and overcomplicated branches. It’s a total mess of a film that brings forward little else than a feast of unearned emotion.