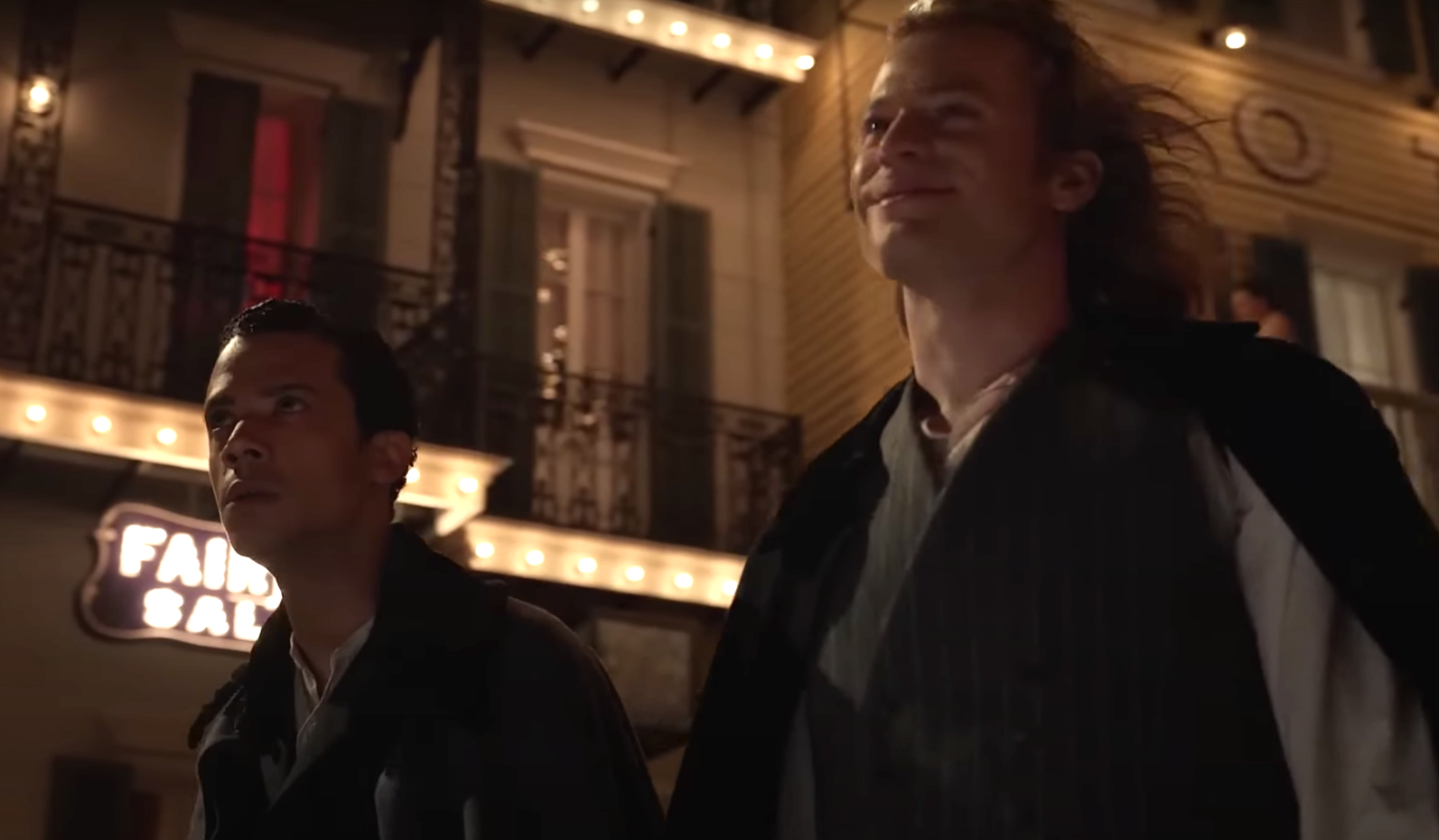 Interview With the Vampire has to be one of the most enthrallingly sexy and vicious television shows to emerge in years. Anyone who’s read Anne Rice’s Vampire Chronicles will know that the author made a career out of blending the horrific with the lustful, the disturbing with the delectable. Reading Rice’s novels can have you gob smacked at a terrifying display and sweating with unbridled desire within a mere 20 pages, and it’s that same spirit that AMC’s adaptation channels.

Anne Rice wrote the screenplay for the 1994 film adaptation of Interview with the Vampire. However, it was clear that she was hamstrung by a film industry that was not quite ready to embrace more challenging notions of sexuality, not in a big-budget period piece starring A-listers. Let’s suppose you’ve read Rice’s Vampire Chronicles or her Mayfair Witches books (also about to emerge in an adaptation from AMC). In that case, you’d know that bloodshed and sexuality are intrinsically linked in the author’s works.

When it comes to vampires, the notion of succumbing to your hidden desires or embracing the parts of yourself that you’ve kept secret from the world is a major part of the mythology. It’s what makes the allure of the creatures so captivating. They come to you at night, when you’re naked in your bed, and seduce you into a world of endless lust. Francis Ford Coppola understood this when he adapted the original vampire story with Bram Stoker’s Dracula. Just as the werewolf myth is about letting out your unbridled rage, the vampire legend is about releasing your desires and letting them guide you through your undead life.

AMC’s adaptation of Interview With the Vampire understands this implicitly, which is why they make the changes that they make to Louis’ tale. Instead of being a plantation owner, Louis (Jacob Anderson) makes his living off of sex workers. Rather than meeting Louis after his brother has died, we watch the slow descent into madness that consumes his sibling, just as Louis does. Finally, and most importantly, Louis becomes a man of color, making him someone who is used to being on the outside of society and a person who would be even more desperate to embrace a world where he can break all of the rules.

It’s elements like these where it becomes clear that Anne and Christopher Rice were pivotal in developing the series. While Anne has always made sexuality a central part of her stories, her son, Christopher, is an openly gay man. Now, between the two of them, they have been able to translate the sensuality of Rice’s novels to television. Furthermore, as Interview With the Vampire allows viewers more time to live in the author’s tempestuous version of New Orleans, we have the time to soak it in and feel it in the marrow of our bones, the very beating of our hearts.

The homoeroticism and fluid sexuality of The Vampire Chronicles have always been ahead of their time. The same goes for many of Rice’s other books, which deal very scandalously with incest, hermaphroditism, and just about every other forbidden version of sex that the human imagination can conjure into being. Because it’s fiction and the reader is alone when they digest it, they feel safe to be turned on by these lurid scenarios in a way that might humiliate them in their day-to-day life. That’s what has always been so tempting about fictional eroticism and why it has endured as a form of storytelling since the ancient myths of Greece and Egypt.

We all have desires within us that frighten us, and we all have thoughts that make us feel ashamed. Interview With the Vampire proposes a sudden shift that would allow us to chase these hidden parts of ourselves but also offers a steadfast conscience in its central character. Though Louis can kill anyone he wants to and can do anything he likes, he feels shame and regret for fulfilling his long-repressed desires. In this sense, Interview With the Vampire mirrors the struggle between Boyd and Ives in Ravenous, another story about two men who really want to do the same thing, and the battle between them as one resists his urges, and the other embraces them.

Other gothic novels like The Strange Case of Dr. Jekyll and Mr. Hyde and The Picture of Dorian Gray plainly show that these hidden desires and the fear of releasing them are a vital part of what makes much of the horror genre tick. Meanwhile, these concepts are as relevant and effective today as we see in movies like Raw or television shows like Midnight Mass. Both stories understand what it’s like to hide part of yourself, just as much as they understand the freedom and the terror of revealing yourself to the world’s judgment.

This is what makes AMC’s Interview With the Vampire so captivating and alluring. The series seduces the viewer as if they’re smoking opium or consuming absinthe without even knowing it. It makes you feel as though you’re being drugged against your will and secretly enjoying it. It’s an incredible trick and one that few shows can pull off. Though there have only been two episodes of the series thus far, it’s easy to see why AMC has already renewed the show. Hell, if I was the in the top brass at the network, I would have greenlit a second season on the back of the first episode alone.

Amsterdam Is a Star-studded Mess