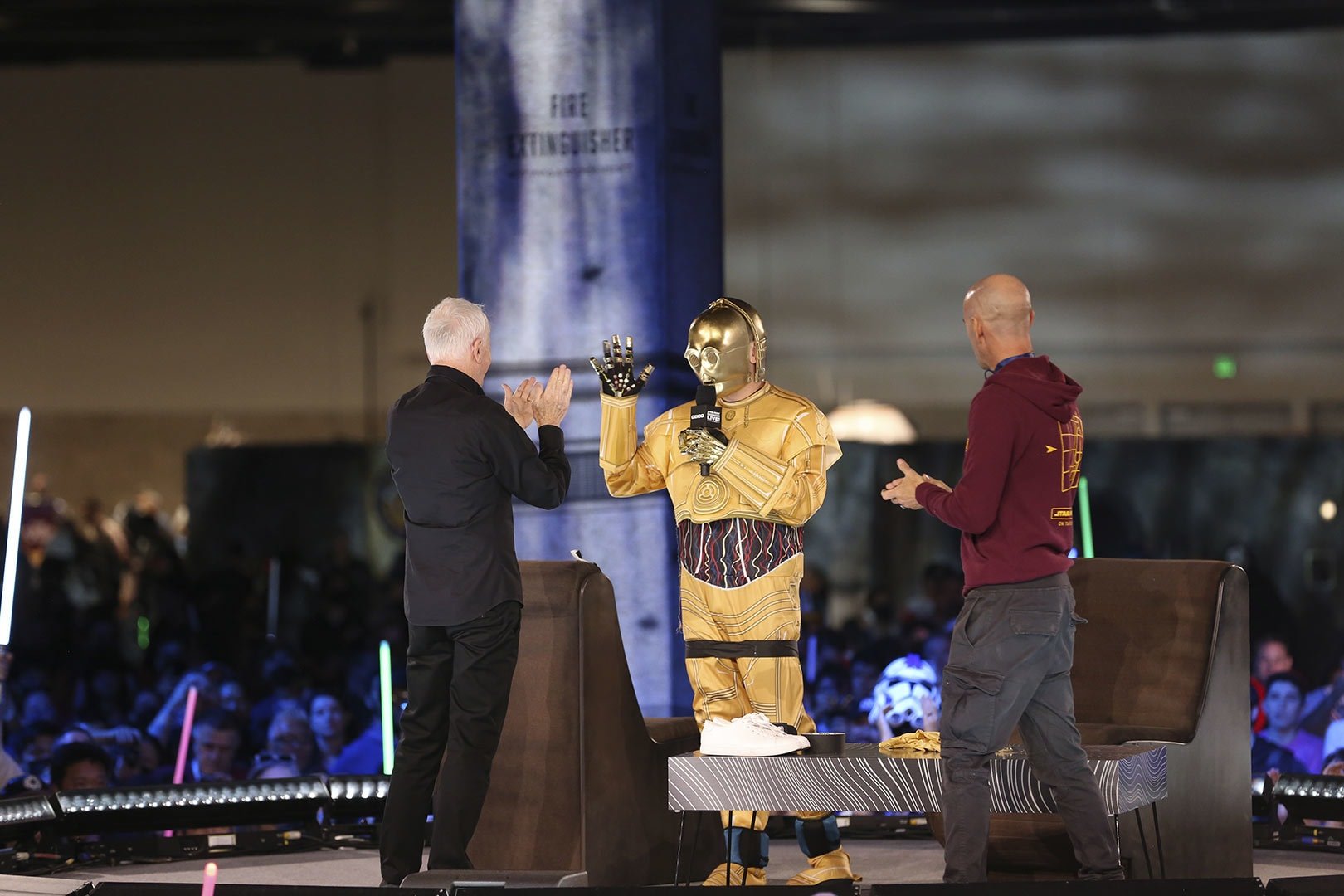 There was a great movement in the Force this past weekend, as if millions of voices cried out in joy and suddenly got super geeky. The Anaheim Convention Center played host to thousands upon thousands of Star Wars fans who enjoyed plenty of activities during the 2022 edition of Star Wars Celebration. Our first article provided coverage of days 1 and 2. This time we look at the exciting announcements on the weekend proper.

One’s geekdom can stem from any number of integral elements that make up Star Wars lore. One of the more off-kilter panels was broached on Saturday when some of the leading technical experts behind the famous Star Tours Disney Parks attraction partook in a Q&A. Tony Baxter, Dennis Muren, and Chris Munco shared insights into the development and evolution of the lauded attraction, which celebrates its own 35th anniversary. Time flies when having fun.

The enthusiastic Temuera Morrison regaled Boba Fett fans (the character and the Disney+ show), Clone Wars writers Sam Witwer and Matt Lanter discussed their highly regarded animated series, and one panelist got cased in a C-3P0 helmet by Anthony Daniels. No one said serving human-cyborg relations was easy.

And what of the major announcements? Saturday and Sunday were a bit lighter then Thursday and Friday, but here is the exciting news Lucasfilm shared.

The creative team behind the computer-generated Clone Wars show gave fans a new spin on a rebellious band of soldiers in season 1. Season 2 promises more action and attitude, as evidenced by the trailer that was shown.

Star Wars: Tales of the Jedi

Star Wars: Tales of the Jedi. Premiering on Disney+ autumn 2022.

Loosely inspired by the Dark Horse comics series from several years ago, this is a new animated mini-series that will span 6 episodes. The premise is simple but holds much promise. 3 episodes will reveal different moments of fan favourite Ahsoka’s life as a padawan and Jedi, whereas the other half will do the same for Count Dooku. Furthermore, it was announced that Liam Neeson himself returns to voice Qui-Gon Jinn, even though the latter will only be a supporting character.

Star Wars: Visions is one of the freshest spinoffs the franchise has to offer since the Disney ownership.  Premiering in 2021, the 9-part anime anthology explored a plethora of galaxy spanning adventures, all of which were produced by Japanese animation studios. Different looks, different feels, different characters, all very well received. Details are hazy at the moment, but expect more outside the box visions early next year.

Star Wars The Acolyte. In development for Disney+.

This was a cagier announcement over the weekend. Not too much is known about Acolyte. Leslye Headland serves as writer and showrunner for this 9-part series set way before the timeline most Star Wars fans are familiar with. 100 years before Episode 1 was a very different time for the Jedi Order. The show will explore how a time of peace slowly began to erode as it eventually did during the prequel trilogy.

The lights are now off on Star Wars Celebration 2022. Fear not, the event will return in April of 2023 to host fans once again. There will be no need to travel to a galaxy far, far away either. Only as far as England.